Coachman VIPs have always been renowned for refinement and quality. This year, with the introduction of bonded construction and its attendant 10-year warranty, VIPs raise the bar. Refinements like the introduction of an offside light, dimmable lounge lighting, the beautiful fabric scheme, plus 35 fewer kilos to tow, make the 575 an even more appealing option. 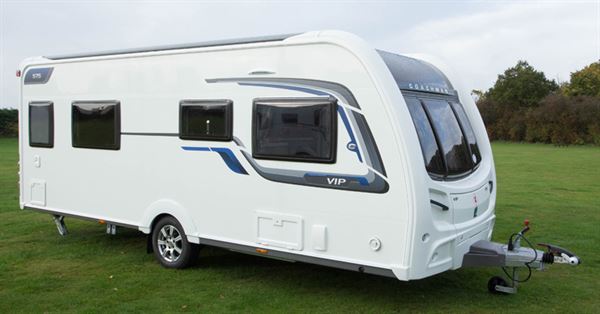 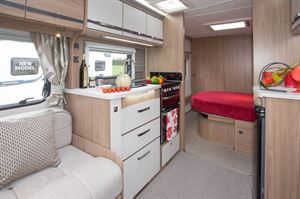 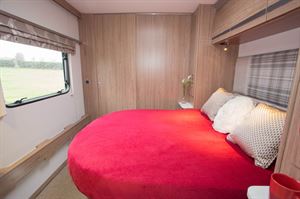 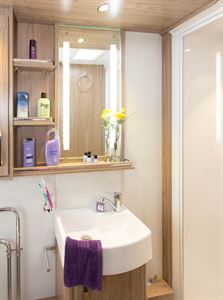 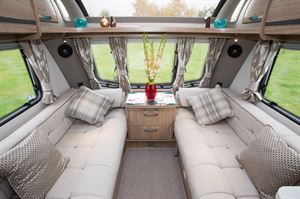 The 2016 Coachman VIP 575, the island-bed model which is the best-seller in the VIP range, is 35kg lighter than its predecessor.

There are now more than 30 transverse island bed models from which to choose, ranging in price from £15,199 to £31,394 and in weight from 1350kg to a mighty 1923kg MTPLM. Most of those models are in the mid to upper price and weight ranges. A bewildering amount of choice, one might say. We’ve been spending time in one of those you’d consider if quality and high spec are your priorities, rather than weight consideration or price.

The VIP take on the transverse island-bed theme is well stocked with spec and style; a refined offering with Alde heating, a 10-year water ingress warranty, an alarm system, plenty of mains power sockets (six) and light switches everywhere including alongside the bed.

We chose the transverse-bed 575 as an example of the range for this review because this is the best-seller model in the VIP range.

The VIP range has new fabrics, a new television-radio aerial and new kitchen surfaces for 2016 (of which more later). The major changes, though, are elements of this range that you can’t see. They’re lighter in weight. And they have a new method of construction compared with their predecessors. VIPs now have bonded construction, the result of a two-year project involving experts from Hull University’s engineering department and bonding agent company Bostik, working with Coachman to develop the new structure method. The result of those two years of work is Coachman’s own Advanced Bonded Construction (ABC), and involves the use of polyurethane materials, which have enabled the manufacturer to reduce the weight of all its models.

Coachman’s emphasis on weight reduction for its 2016 models takes the weight of this model down by 35kg compared with the same model last year. And one way in which weight has been reduced is by the introduction of new tables. These are super-light tables, so easy to pick up, unfold and put away again. They’re around half the weight of the tables formerly used in Coachmans, yet they feel sturdy.

Another change for 2016 is the arrival of new TV aerials. Status 570 units, with integral AM, FM and DAB radio reception capability, replace the Avtex models fitted to last year’s models

Spec and construction apart, the VIP 575 has refinement in bucket-loads, especially in the ambience of its bedroom and ensuite arrangements.

The sink is deep and almost Belfast-style. The splashback above it is smart white, flecked to imitate rock. Lighting is set into the mirror. The window is dressed at the top with a folded part-blind, edged with six chunky metal eyelets. Three shelves, two small ones and a longer one, each with metal and wood-beading edging are features of the cabinet arrangement. The look is very refined.

A heated towel rail is on the rear wall. A towel loop and a double hook are on the forward wall of the shower room. That’s sufficient towel accommodation but, for best towel-drying efficiency, a rail above the Alde heated towel rail would be brilliant. If we were buying this model, we’d investigate adding one.

The shower is plenty large enough at 63cm x 79cm, and with two shelves for shampoos. And the 76-cm depth of floor space makes this a shower room most would regard as nice and spacious.

There is one element of the shower room, introduced for 2016, that we don’t especially like. The window is now opaque. What’s the point? When you need privacy, there’s a mesh blind and a full blind to choose from. Sometimes it’s nice to see outside from any window you may choose!

The bed is 1.7m long in its retracted day made, extending to 1.87m when you give the big, wide handle at the foot of the bed a quick tug. The base is an interesting design, with the front third of metal-framed slatted bed base sitting 11cm higher than the curving wooden surround of the bed box. The bed base in this sector is supported by the metal structure that allows for the retraction and lengthening mechanism. Viewed from the lounge the bed looks as if it’s floating; a nice style point (albeit probably covered by a duvet for most of the time). But there’s something more practical than style at play here; making the bed box a lesser depth is one way in which Coachman has shaved weight from the 575.

This model has a corner dressing table, with cabinets above and below, complete with a mirror, a mains sockets plus TV connections.

The 575 is very much a two-plus-two tourer. If you want to transform the lounge into a bed, though, the task is an easy one, with a really sturdy metal-framed centre base section sliding out from under the offside settee.

Storage is always a happy subject in a caravan with a double bed. In the 575 the under-bed space is 1.54m long and 1.32m at its widest point, narrowing to 1.10m at the foot end where it’s smaller to create more floor space. That’s plenty of area for all sorts of stuff, and there’s an exterior hatch through which you can feed in awning chairs and a table.

Wardrobes are 42cm and 30cm wide, with shoe cabinets and a drawer beneath. Three top lockers are above the bed and six more are in the lounge.

Both settee storage areas are great to access, each with a single gas-filled strut taking the load as soon as you’ve started to raise it.

The new-for-2016 lightweight table lives in its own cabinet on the fore end of the kitchen. It’s a delight to extract and replace because it’s so light to handle. Its two t-shaped legs are of an unusual design. Each folds outwards and clicks instantly into its upright locked position. It’s so easy when you want plenty of space to set out dinner, and when four are dining. The 575’s centre-front pull-out breakfast and lunch snacks table is a good size at 69cm deep and 63 wide.

There’s something classically elegant about the use of tartan-type pattern. Like the lining of an expensive wax jacket, or a tartan scarf, it’s associated with a country show look. So in the VIP, two of the cushions and the bases of the two-section armrests in subtle tartan-type pattern, inject a high-society look which we think is 100% in-keeping with the elite, county-set idea conveyed by the VIP name.

Fine attention to detail continues the refined theme, with seat back and curtain stays edged with fine brown fabric that has silvery bits in the weave. Unusually, the buttons on the seating are elements of the styling; these are covered in the same brown-silvery fabric. The VIP’s fabric style for 2016 takes fawns to a whole new level. We love it! And with four cushions, plus curved, firm armrests that offer you two levels (you can zip off the top sections), comfort is guaranteed.

The hub of holidays, one might say. So kitchen configuration and workability is a key consideration when you are choosing a caravan.

An important attribute of the 575’s kitchen is that it has two surface areas, the second one being above the fridge on the nearside. That gives you, in total, ample space for culinary creativity, although it has to be said that had there been a hinged extension on the fore end of the main kitchen surface, you wouldn’t need to use the space over the fridge.

Storage is great, with three upper cabinets plus three drawers, each 59cm wide. There’s a shallow cutlery drawer above the fridge and of course two more deep drawers, should you need them for table mats and the like, in the lounge.

We’d had the 575 in our care for the best part of a day before we took it out on the road. We were already well impressed with this model’s livability and refinements. Would its handling match?

With ATC stability control on board it’s, on paper, up with the best. And that’s the way the 575 behaved behind our SsanYong Rexton; its test tow was simply a smooth, easy trip.