We love the phone charging pad. And the two-level dimmable touch-control spotlights, the light in the oven and the tones and textures of the six cushions and horizontal pattern of the curtains. We also like the facility to retract the bed to just 1.5 m, creating 78 cm of corridor space. It all adds up to a package of techy and style splendour. VIPs for 2020 are more refined and stylish than ever. 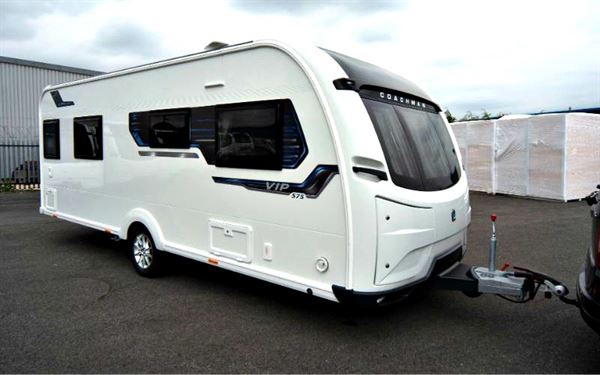 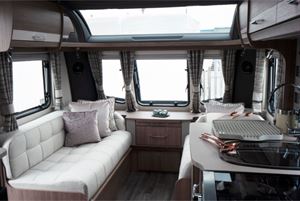 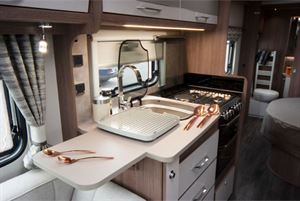 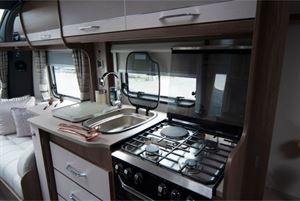 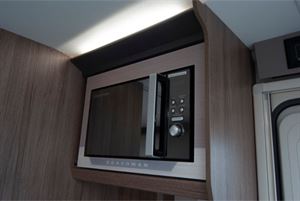 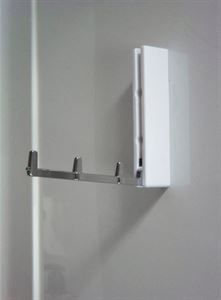 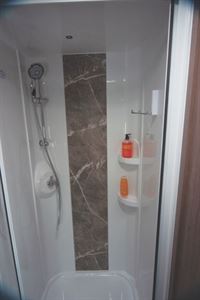 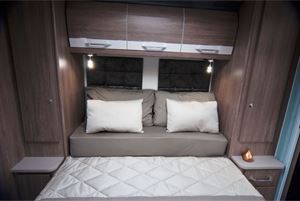 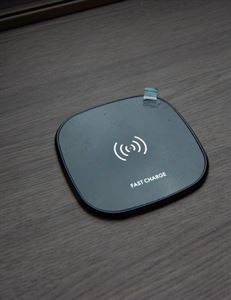 A phone charging pad, a light in the oven, dimmable touch-control spotlights — 2020 Coachman VIP caravans are more refined than ever.

A phone charging pad, a light in the oven, dimmable touch-control spotlights — 2020 Coachman VIPs are more refined than ever.

Coachman is unveiling a raft of new models for 2020 including this VIP version of its island bed, rear shower room 575 model. For 2020, the island bed principle moves on a big step in the two Coachman VIPs that have this feature (the other is the 545), with the bedroom at the rear.

That’s because a new retraction mechanism has been introduced, which makes the bed even shorter for daytime use. In the VIP 575, this creates a 78 cm-wide corridor — and makes the bedroom more of a daytime relaxing area.

The mattress has a larger foldable bolster section to go under the pillow during the day — and so looks and feels more like a settee. Pop your TV on the dressing table in the offside front corner of the bedroom, put your feet up and enjoy some TV time!

VIPs for 2020 are stacked full of new refinements. There’s a mobile phone charging unit set into the windowsill — suitable for iPhone 8s and Samsung 7s and newer — and, if your phone is of a slightly older generation, you can buy an adaptor pad for the charger.

Two USB ports are by the dresser; the 575 is equipped with six mains sockets.

New features for 2020 also include a Phantom Vanguard alarm that incorporates both a PIR and tilt sensor. The alarm key-fob also controls the awning light so you can switch it on as you approach the caravan after dark.

More new features include an interior light for the oven, the pan trivet is now made of cast-iron…the list of refinements goes on, to touch-control spotlights with a two-level function so that you can set them to be dimmer or brighter.

The strip of light above the kitchen surface also has a touch control –you simply pass your fingers along one end of the strip and the light comes on.

More refinement is introduced in the shower room for the new season. The heated towel rail — part of the Alde heating system — is a new-style bright white ladder shape — and it’s capable of accommodating four towels.

Polished rock-effect finishes a stunning basin splashback and a floor-to-ceiling panel in the shower cubicle.

The cabinet-top wash basin is a new style, too — with a matt fawn exterior that matches the cabinet surface. A towel loop and hook are set high up on the forward wall of the shower room, nicely out of the way.

And there’s a small surprise in the shower cubicle — an exceptionally neat metal towel hook folds out from a white casing — perfect for either towels or for hanging wet coats to dry.

The double bed is 1.96 long in night-time mode, retracting to just 1.50 m for daytime — and creating loads of corridor space that makes the bedroom feel more like a home than a caravan.

There’s a sizeable wedge-shaped dressing table with a cabinet below, and a narrow shelf runs the entire length of the bedroom. Use it for practicality or pop some pictures or an ornament or two up there — or just leave it plain; it looks simply stylish, together with the triple-fold Roman blind at the top of the window.

Wardrobes are on each side of the bed. The forward one gives you 44 cm of hanging space; the rear one 30 cm. This one also has drawers.

Making up the lounge double bed involves drawing out a central base of webbing-linked slats. This bed is 2.05 m long and 1.4 m wide.

Three lockers over the bed, three large lockers and two corner lockers above the lounge, plus under-settee space (although there is no front access here). And, in addition, a cavernous space under the bed, complete with exterior hatch, another new feature for 2020.

The 575’s storage credentials are first-rate apart from the need to raise the settees to get to the spaces below. This is not arduous but front access would be easier.

With the 30 cm hinged extension in place, the kitchen is 1.62 m long so, when you put the glass covers for the hob and sink down, there is plenty of surface space. We love the VIP’s deeply grooved drainers (small plates will stand vertically to dry) — and with a lip to direct water back into the sink.

We also love the light inside the oven and the cast-iron pan trivet, which adds to the substantial, house-like appeal of 2020 VIPs, as does the soft-close hinge mechanism on the two top storage lockers.

Kitchen storage comes in three 60 cm wide drawers. Two are 8 cm deep; the lower one is a massive 18 cm deep. A wide, fitted cutlery drawer is set into the dresser opposite, above the fridge.

The microwave is in the dresser unit. Its position is fine for tall caravanners but people of short stature may find it’s a reach too far. This is a Russell Hobbs unit, with a wonderful smoky mirror door and control panel base; another domestic, high-end feature.

To read about all the new 2020 caravans, get the November issue (in shops on October 3), which will have a FREE supplement covering all the new-season models.

We love the phone charging pad. And the two-level dimmable touch-control spotlights, the light in the oven and the tones and textures of the six cushions and horizontal pattern of the curtains.

We also like the facility to retract the bed to just 1.5 m, creating 78 cm of corridor space. It all adds up to a package of techy and style splendour. VIPs for 2020 are more refined and stylish than ever.