High on spec (Alde, ATC, alarm, for example), high on style (the velvety ingredients in the lounge fabric scheme create a gorgeously luxury look) and great on clothing accommodation, the 565 has features that make it stand out from the twin-bed crowd. Only the lack of lower kitchen storage space prompts adverse comment, but you can overcome that to a large extent by using drawers under the wardrobe. 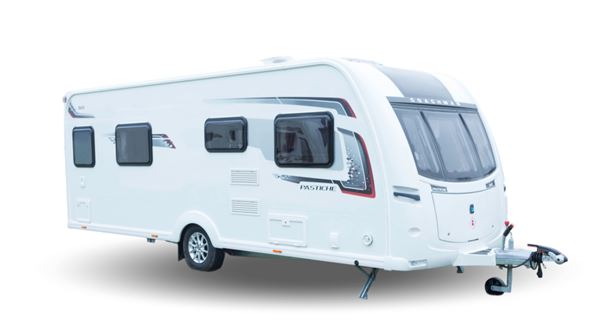 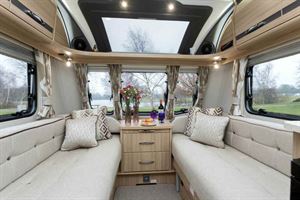 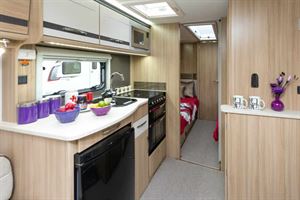 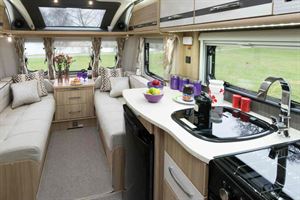 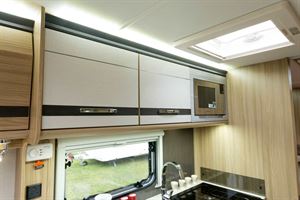 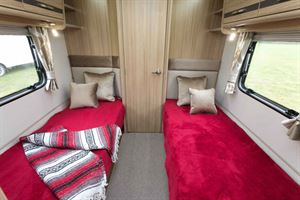 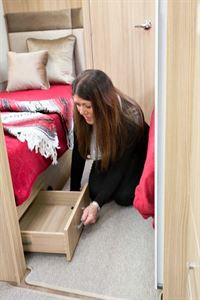 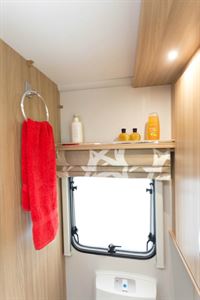 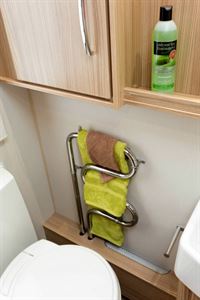 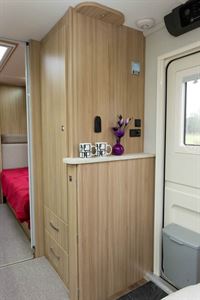 The Coachman Pastiche 565 is a twin-bed caravan with a clear division between the night and day areas and a stunning long roof light in the bedroom.

At £21,645 and 1532kg MTPLM, the Pastiche 565 sits in the middle of the market, the fiercely competitive sector where deals are won and lost on details.

It has Alde heating – and so do nine other single-axle twin-bed models. It has the ATC stability control system, alarm; so do a good number of its competitors.

So how does this caravan grab attention? Well, three things make the 565 stand out from the crowd. First, as you step inside, the luxurious velvety cushions catch your eye amid a stunning meld of light-reflecting pastel fawns and creams. It's a brilliant yet subtle palette.

The second thing you'll notice is that Coachman divided this caravan very nearly into two rooms, with a "doorway" gap that's only 58cm wide between the bedroom and the kitchen.

Take a step further, into the bedroom, and you’ll see the third distinguishing feature: a 1.35cm-long roof light. These stunning long roof lights aren’t peculiar to Coachman of course – but the 2017 Pastiche 565 and its same-layout sibling in the VIP range are the first Coachman models to be fitted with this design.

There’s something unseen that distinguishes not just the 565 but all Coachman caravans; that’s the way they are built, using a fully-bonded system called ABC – Advanced Bonded Construction, which involves polyurethane plus chemical bonding adhesives. The idea, of course, is to eliminate water ingress; and it’s backed by a 10-year water ingress warranty.

Coachman makes Pastiches for four-season caravanning. During our chill-wind review days, the silent efficiency of Alde heating kept us predictably toasty-warm; we love it!

Coachman equips Pastiches with alarm systems. And they have lots of furniture and finesse features that point to Pastiche quality. Drawers ride on metal runners, and they're dovetail-joined, for example. And spotlights have touch-control switches that enable you to illuminate just the base or choose the bright light that comes from the tiny, solid acrylic tubes.

Coachman has built its reputation on the quality of build, of cabinetry and also on the exceptionally generous size of its shower rooms.

The 565’s keeping-clean room, though, is not one of the biggest in the Coachman portfolio, but nonetheless, its 90cm depth ranks it amid caravanning’s most spacious.

Buyers looking for plenty of showering space usually prefer rectangular, rather than circular showers; most buyers will consider the 565’s shower, at, 66 x 78cm, large enough. Two shelves for shower gels and shampoos are here. And your towel is within easy reach on the double hook on the forward wall of the shower room. There’s also a towel loop and, if you like your towels warm, you can put one of them on the Alde radiator on the rear shower room wall.

The washbasin is larger than most (42cm wide and 10cm deep). Two cabinets and two shelves give you enough space to put stuff. And bright lights are set into each side of the washroom mirror.

Twin beds in both Pastiche and VIP 565s are lower than those in the majority of caravans of this layout; they’re the same height as the lounge seating. Although that does give you a little less storage depth in the boxes beneath, it means they look more like settees than beds when you put a couple of throws and some cushions on them. So you can regard this area as a second lounge, perhaps; somewhere to retreat to when your sport of choice is on TV. Television connections are at the foot of the nearside bed.

The bedroom is nicely secluded by the full-height wall that borders the kitchen and by the wardrobe opposite. A smart grey pleated blind draws across the corridor when you want privacy. But the position of the closet, forward of this partition – effectively in the day area – won’t suit buyers looking for an entirely cohesive bedroom dressing room.

If you want to create a bed in the lounge, you draw out the central base section from under the offside settee. It’s a robust metal-framed structure.

Six top lockers line the bedroom walls, and there’s an elegant feature in 565s: a drawer integrated into the base of the nearside bed; perfect for sock-type small items. The top of the drawer has a ledge border, so that, too, is a place to put yet more little things. It's a pity Coachman’s designers didn’t put the same excellent feature into both bed bases, though.

There's an exterior aperture to space under the nearside bed; ideal when you want to stow away folding chairs and the like.

Both beds rise easily on gas-filled hinges, as does the front nearside settee. The offside settee requires slightly more effort to raise because the substantial central base section is part of the construction. (You draw it across the corridor to meet the nearside settee to create a double bed here.)

The wardrobe has 67cm of hanging width and two drawers beneath. Four top lockers and of course two central front drawers give you plenty of lounge storage space.

We love the storage position for the table; it has its cabinet on the fore-end of the wardrobe, as close to the lounge as you could get. Coachman tables are light to lift and have an easy-to-operate folding leg mechanism. When you don’t need to get out the main table, the pull-out chest-of-drawers top gives you 90cm of surface space; perfect for breakfast or a quick lunch.

The 565’s lounge seats four, rather than six, but they are long enough for feet up relaxing. There are TV points above the ledge created by the table cabinet, on the fore end of the wardrobe. The second set of TV connections and a fixing point for a television bracket are in the bedroom. After dark, we discovered that the lighting above the lounge top lockers, plus bright spotlights set into the sunroof surround, create generous general illumination, and those delightful little directionally-adjustable spotlights take care of task lighting needs.

At 93cm wide, there's just enough kitchen surface, but we think keen cooks will agree with our opinion that a hinged extension would have turned this kitchen from adequate to superbly convenient, hence only a C rating.

Lower storage space consists of a 30cm side cabinet in which your kitchen equipment shares its space with gas taps, plumbing and the wheel arch. There's a cabinet under the oven, of course, but that's not sufficient for all the usual pans and paraphernalia. There's a 30cm wide drawer above the central cabinet, plus an excellent cutlery and utensils drawer above the fridge. We think most buyers will take over the drawers under the wardrobe for kitchen stuff; with quantities of clothing accommodation elsewhere, you won’t miss these two drawers.

Our 565 test tow was easy and enjoyable. AL-KO ATC is present, as you’d expect at Pastiche level of spec. We thought it might have been provoked into action on the windy day of our test tow, on exposed stretches of road, given that this is a single axle caravan, and so more susceptible to sway than twin-axle models. But, so far as we were aware, it stayed dormant.

The driver isn’t always aware when this automatic electronic system applies the caravan brakes to snap it back into alignment when it detects the first signs of snaking. It's an impressive piece of gadgetry that owners of caravans equipped with it take for granted – until it takes control in the event of a surge of high wind, for example. Then you realise why an increasing number of tourers have ATC as standard and it’s an option on many more.