With Alde heating, an alarm system, Whale Watermaster inlet point (so that you can connect to your pitch’s water supply), Pastiches have all the spec a discerning buyer requires. A good level of spec – and a layout that’s already turning heads; the 470 is, we believe, destined for great popularity among two-berth buyers who want something different, practical and high-end stylish. 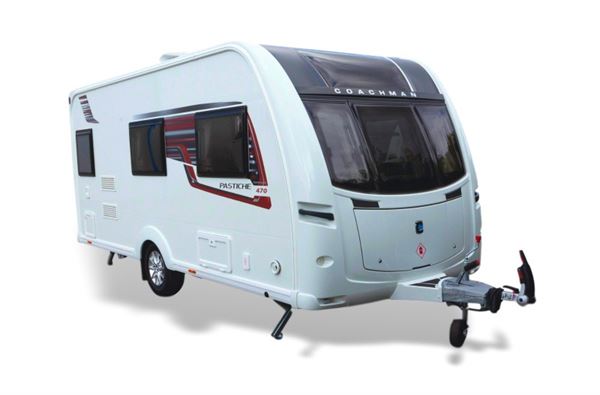 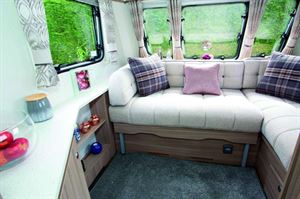 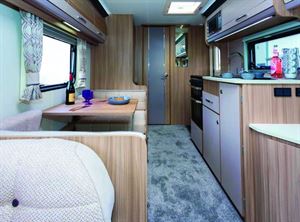 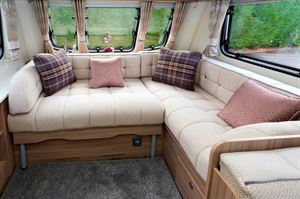 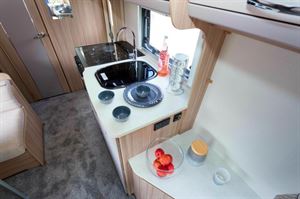 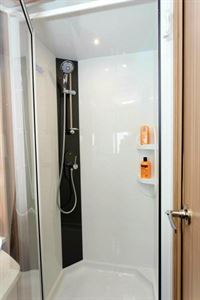 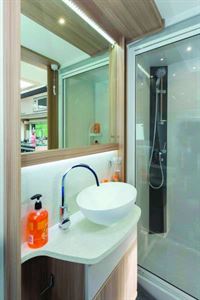 Coachman’s innovation for 2019 is the brilliant, lightweight, Alde-heated two-berth Pastiche 470 with an L-shaped lounge and a dedicated dining area

Coachman's innovation for 2019 is the brilliant, lightweight, Alde-heated two-berth Pastiche 470 with an L-shaped lounge and a dedicated dining area

A decade ago, L-shaped caravan lounges were much in fashion; the extra floor space that this seating arrangement creates being key to the popularity of this layout. The look of these caravans is more open-plan. Yet, like side fixed beds and twin lounges, L-shaped lounges dwindled in number.

Fast forward to 2018. If you wanted a new L-shaped lounge caravan, you had to buy an Alaria – and they're gorgeous. But not everyone wants an enormous, eight-feet wide, twin-axle, post-£33,000 caravan. Enter Coachman's new arrival for 2019, a neat, single-axle bundle of high spec and super styling. The Pastiche 470 makes a bold statement in caravan layout fashion: the single-axle, L-shaped lounge caravan is well and truly back.

And there's more. This isn't just an L-shape revived. It's a layout never before seen, with not only L-shaped sofas but also a wide, cosy dining area for two, on the offside. It also has sprung seating and soft-close top locker doors.

We saw this layout in diagram form before we went to the Coachman factory to see the real thing. On paper the practicalities are obvious: you make the lounge into a double bed and, instead of having to turn it back into a lounge before breakfast, your breakfast table is ready for you.

At the end of the day, you can make up your bed well before bedtime, so it's ready for you after you've spent some time relaxing in the 'dining room'. You could leave the lounge made up as a bed all the time.

We were sure to love this caravan, we decided.

Then we arrived at the factory and opened the door – to a caravan that looks far more spacious than its compact 4.7m body length would suggest and is beautifully crafted to create cosiness in both the lounge and dining areas.

While the stunning new Pastiche is set to grab much glory once potential buyers see it, this caravan is by no means the only big news from Coachman for 2019. Lasers are back! Actually, they never went away. Lasers are the same spec as the VIP models.

The only key difference was that Lasers have two axles and VIPs have one. It seemed logical for Coachman to put all those models under one umbrella; for 2018 they were all VIPs. Laser aficionados, though, disagreed. After all, the Laser name has long been Coachman's flagship. So the intense beam of light shines again, with three models, which have silver sides, inboard water tanks – and fridge-freezers with doors that open from both left and right! More details will be in future issues.

In the meantime, our focus is all on the Pastiche 470. We'll start at the back.

The shower room is nicely spacious. At 77 cm deep. It's the usual layout, with the shower on the nearside, the basin in the centre and the loo on the offside. Styling is delightful, with the basin sitting on top of its cabinet, which has a matt granite-effect top and matching splashback.

A heated towel rail – part of the Alde system – curves and curls its way up the rear wall. A towel loop and a hook are high up on the forward wall.

Row of bright LEDs focus down from above and below the large mirror and three bright spotlights are set in the ceiling. The shower is 79cm x 65cm, with two good-sized shelves for shampoos. Altogether a lovely, practical and stylish washroom.

The lounge transforms into a bedroom by pulling out a base from under the settee that runs across the front of the caravan. It has a metal frame and runs in and out of its hideaway easily and smoothly.

The mattress is created by moving the backrests down to lie with the main settee section – it took us less than a minute to create a double bed that's 1.86m x 1.3m. The 470 is ostensibly a two-berth but is actually capable of sleeping three; a single bed can be made from the dining area, although it's only 1.78m long.

There's a 1.2m-wide storage area under the front settee; the top raises easily, even though it has a double slatted base (to pull out to create the double bed) and is self-supporting on two gas-filled strut hinges. The areas under the dining seating are also easy to get into, by sliding back the slatted bases.

The wardrobe is above the fridge, just forward of the shower room. It's a good size, at 60cm wide, and gives you a hanging depth of 96cm. Six top lockers (excluding those in the kitchen) give plenty of space for small items. And there's a storage bonus in this layout: a large, triangular cabinet on the nearside, forward of the settees.

If there's an Achilles heel in caravans with L-shaped lounges, it's that two people can't sit opposite one another. The new 470, though, doesn't have that downside – because it has a separate dedicated dining table for two, cosy and comfortable.

The seating here is wider than those in most traditional side dining area layouts, at 76cm. And, whereas most simply have backrests, the dining seating in the 470 has upholstered sections against the wall, too, so you can get comfortable here.

Interestingly a free-standing table is provided – it's stowed away inside the wardrobe – should you want to dine in the lounge – or of course you could use it in an awning.

The lounge seating configuration gives you a settee across the front that's 1.62m (not including the wide armrests) and a seating area on the offside that's 1.1m long. So, plenty of space for one to sprawl out and relax, with feet up, while the other sits on the offside.

Any which way you choose to use the lounge, the seating is nicely supportive and comfortable, we discovered during our review day. An important consideration if you're accustomed to inviting friends is that three can sit in the lounge and another two in the dining area.

Your TV goes on the large surface on the nearside; two mains sockets plus aerial connections are here.

Limen-look cabinet doors, matching the lower sections of the top lockers, distinguish the kitchen visually. Lighting streams from above the top lockers and a row of LEDs sits under these lockers.

The surface area to the right of the sink is only 35cm wide, so this is one kitchen in which you'd keep the tops down on the hob and sink while you did the pre-cooking prep; that way, you get a kitchen surface that's 1.3m long. And, of course, there's a table opposite to help you. Altogether, it's fine for making meals for two.

Storage comes in a 43cm-wide cabinet with a drawer above, plus a 28cm-wide, full-height cabinet containing a pull-out shelf/drawer. That's plenty of provision for the kitchen needs to two.

The Thetford hob is beautifully designed, with the hotplate raised above the pan trivet so that large pans can be used on it. The new style of Thetford cooker for 2019, though, makes sure you notice it for another reason. Whenever the hob is raised, an audible fan switches on automatically. Its purpose is to keep the knobs cook when the grill is in use.

At only 1320 kg MTPLM the new 470 is a good mate for many cars much smaller and lighter than our Rexton that takes out all our review caravans. AL-KO's automatic stability system, ATC, is fitted to detect and correct the first signs of a snaking motion.

With Alde heating, an alarm system, Whale Watermaster inlet point (so that you can connect to your pitch's water supply), Pastiches have all the spec a discerning buyer requires.

New for 2019 are paler (attractive) woodwork, luxurious shadow-pile silvery grey carpet and russet-and grey graphics that are guaranteed to get you noticed. So, a good level of spec – and a layout that's already turning heads; the 470 is, we believe, destined for great popularity among two-berth buyers who want something different, practical and high-end stylish.