We love the big, totally rectangular bed, the U-shaped lounge and the amount of floor space in the centre of the 455. We love the ingenuity of the combined shower/toilet room, with its two bi-fold doors and towel rail hinging down from the roof. We wish the heating system operated on mains power as an alternative to gas. 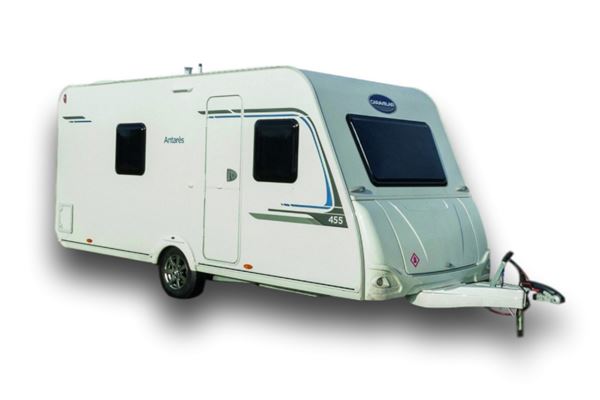 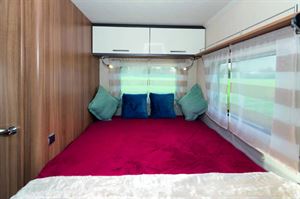 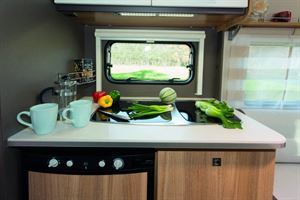 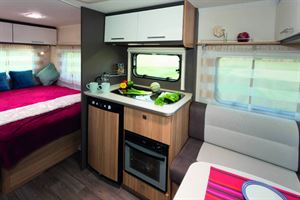 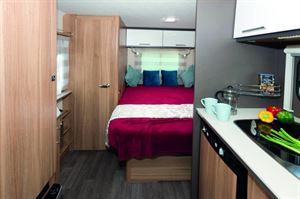 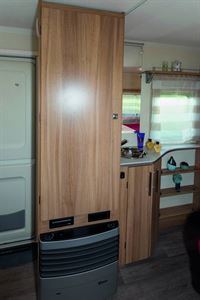 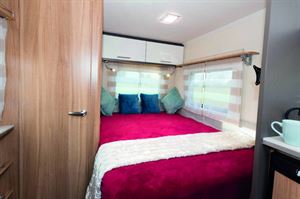 The Caravelair Antarès 455 is the only caravan with a bed that has no cut-off. It is also one of the lightest fixed-bed touring caravans.

Wrap-around seating with large, oval or circular tables is a hallmark of continental caravan styling. Another feature that makes continental caravans stand out from the crowd is that the double beds tend to be larger, and with minimal cut-off corners, compared with British-made caravans.

We’re thinking Knaus, Hobby, Adria. Most caravans in these ranges are quite large. If you are looking for something compact with lots of lounge seating and a large double bed, though, we may have found one for you to consider.

The six-model Caravelair Antarès range is made in France and Marquis, the 11-branch giant, now imports them. The Antarès 455 is one for four models in the range with strong couple-appeal. And, at just 1000kg MTPLM, this is the lightest caravan in its category.

The Trigano group makes the Caravelairs. They have a Caraheat Truma heating system. Caraheat is Marquis's addition to the gas-only Truma heater; it's a blown-air system that, instead of piping warmed air around the caravan to circular outlets close to the floor, sends heated air out from two vents directionally-changeable above the Truma heater.

On the test, the caravan warmed quickly; from below zero to a comfortable high-teens temperature in around 20 minutes.

It's 7 am and still dark as I open the door of the 455 to begin this review. Torchlight leads me to two rocker switches beside the door. Suddenly the lounge is flooded with light. Not just sufficient illumination, but brilliant white light. Then I find more switches beside the bed. Now the bedroom and shower-toilet cubicle is brightly illuminated too.

All this is worthy of comment because, amid a lot of emphasis on innovative lighting styles and subtle above-locker lighting, there are quite a lot of caravans in which the light isn't bright enough in some areas. The Antarès range is very different. The two ceiling lights in these six French-made models are squares of LEDs; 120 of them to be precise.

In the shower room, there are two much smaller, same-style square light fittings. Bright spotlights on long stalks are in the corners of the lounge and over the bed. And a strip of LEDS is above the kitchen.

The 455 is very much a couples' caravan, although it does have a four-berth capability. In particular, it’s ideal for couples who are looking for a home-size bed in their caravan.

The 455's bed is a massive 2m long and 1.4m wide, with no cut-off. The shower/toilet compartment is alongside the bed.

It is no ordinary combined shower/toilet room. It is two in one. The bench-style toilet is at the rear. Two bi-fold plastic doors divide the shower tray area from the toilet and the wooden door. The shower area, measuring 72x60cm, has plastic-lined walls. There’s a lovely chunky little soap dish, made of frosted glass, sitting on a circular mount by the shower control lever.

And a towel rail clips up out of the way, close to the roof light, ready to lower when you need to hang your towel to dry after your shower.

There's no towel rail or loop, though, in the washbasin area, forward of the shower "room". It is a delightful vanity area with a small circular basin, a large cabinet, three shelves and a fourth above the window and a large mirror.

A curtain tracks across the caravan to divide the whole bedroom and washing facility area from the rest of the caravan. It’s only a C-rating, though simply because buyers are likely to compare the 455 with caravans that have separate showers.

The 455 is the only four-berth caravan on the market that has an entirely rectangular bed; Marquis is keen to emphasise this unique feature which may have gone some way to helping the 455 to win the Caravan Club’s award for Best Caravan Under £17,000. It is an important attribute.

The lounge converts into a bed by using the table as part of its base. You raise a lever by the square telescopic monopod, and the table height descends to bed height. It creates a bed 1.23m wide and 2.12m long.

The small Truma Therme water heater is the only intrusion into the huge under-bed space. The bed frame is easy to raise. There's an exterior hatch large enough to put in sizeable awning chairs if you wish.

Under-lounge storage is on both sides; the solid wooden bed bases are hinged but not self-supporting. Only the battery box slightly diminishes space in the nearside locker. Head-height lockers over the lounge are 48cm deep and 36cm high, so create a lot of space. Those over the bed are 28cm deep and the same height. The full-depth wardrobe offers 48cm of hanging width.

The French emphasis on food is evidenced here in the size of the table – 95x 75cm; that’s substantially larger than most tables in British-made caravans. Equally, in a French style, the table is designed to stay here; there's no designated storage place for it. That's no detriment to the lounge/dining function of the caravan, though, because the seating is luxuriously comfortable with splendid corner supports.

For our preference we’d buy a couple of scatter cushions, to add extra cosiness when lounging, just as we would at home.

We love the Antarès soft-furnishing style; quality voiles hang on matt steel café rods; simple brown suede-effect upholstery with near-white inserts. In the 455, with its amply-sized wrap-around seating configuration, the effect of the styling is arguably more stunning than in other models in the range.

Antarès kitchens have three-burner hobs and combined oven-grills; in the 455 the oven-grill is beside the fridge. With both the hob and sink cover raised, the kitchen surface is quite small; 20 cm of space to the left of the hob plus space in front of both the hob and the sink. So you'd do most of the food prep with the (smart black glass) covers down.

Or you could make use of the lovely big table when you’re cooking. We love the big five-recess cutlery trays in all the Antarès models, with a 13cm-wide space for utensils alongside.

Lower kitchen storage is limited to a small cabinet under the oven grill. The two top lockers, though, are quite capacious at 33cm deep and 45cm wide. We considered ways to overcome the lower storage challenge, given that the 455 has so many strong attributes. We were determined to find a solution to storing pans and oven dishes and food that's not in the fridge.

Where, if we bought a 455, would we find it most convenient to stow our kitchen stuff? Answer: under the bed, of course! We'd purchase a couple of plastic storage boxes and place them at the foot end of the bed box.

At only 1000kg the 455 – indeed all of the Antarès range – is within the scope of drivers who do not have the B+E towing licence; with careful car matching, this caravan is suitable for a broad variety of vehicles in the mid-weight bracket. We did the 455's test tow, though, with a far heavier car than is necessary; one (SsangYong) size has to fit all!

Of course, the 455 was a joy to tow and a pleasure to pitch afterwards; it's light enough to be easily pushed by two, even on grass, as we discovered.

There are no standard options offered