For the price, the new Allegra Home 560 is astounding value, packed with so many features that you don’t expect for £22,000. The 12-volt-operated built-in step, the amazing lighting design, the lights that come on automatically within the wardrobes and under the bed, the extractor fan over the hob, the roof-mounted extractor fan to take the steam out of the shower…. All packed into a caravan whose furniture gives us the impression it’s built for durability. 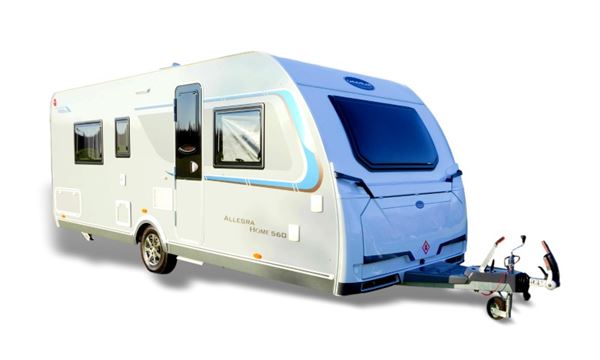 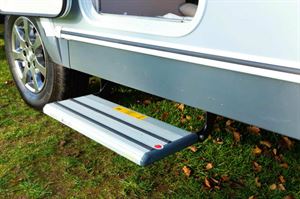 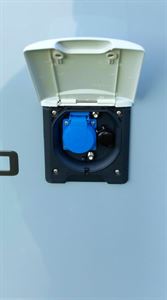 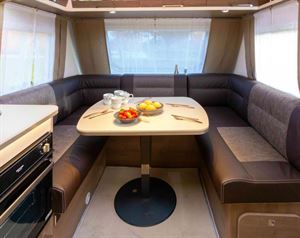 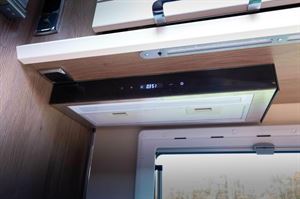 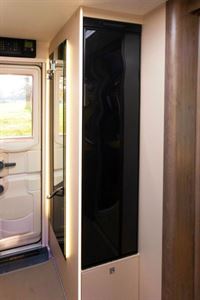 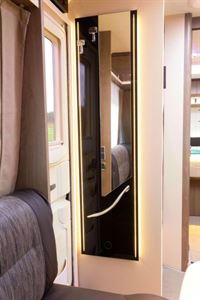 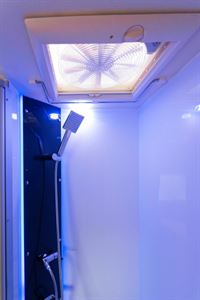 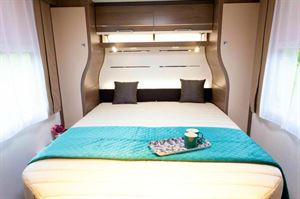 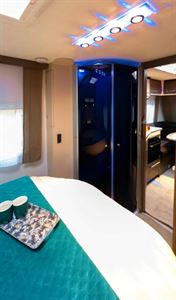 The Caravelair Allegra Home 560 has an electrically-operated step, a water tank, two extractor fans, touch-control spotlights and more - all for under £22,000.

An electrically-operated step, a water tank, two extractor fans, touch-control spotlights and more - all for under £22,000

In the last two years, Marquis has firmly established the Caravelair Antarès brand in Britain. Now, the giant, 12-branch retailer is importing a second range from French manufacturer Caravelair.

Since the first Antarès models arrived in October 2016, the specification has increased, to tailor these models specifically to the British market. Now, Marquis takes its exclusive-spec Caravelair brand a stage further, with the introduction of a new range, called Allegra Home.

These caravans compete in a higher price, weight and spec bracket than Antarès.

There are two models, both four-berths, one with twin beds (the 562), the other with a rear island bed (that's the 560, which we review here).

As we step inside the 560 there's a surprise: Allegras are fitted with 12-volt operated entrance steps! And there's more; much more There's a 50-litre on-board water tank, a 30-litre wheeled waste-water tank and an extractor fan directly above the hob.

The lighting design is nothing short of awesome. Bright blue light patterns spread out across the ceiling from the light fittings in the lounge and bedroom. Strips of bright white light outline the edge of the fridge cabinet and the panel alongside the door on which there are a mirror and two coat hooks.

Three touch-control LED clusters are set into the bases of the top lockers above the lounge.

Lighting runs under the edge of the kitchen surface and within the panels which form the bedhead – plus, there are two tiny, bright blue lights at floor level in the bedroom and one by the entrance door; the last lights to turn out when you get into bed.

There are four USB points by the bed and a total of five mains sockets – that's one in the lounge, two in the kitchen and two in the bedroom.

By this stage in our review, we've already decided the Allegra Home 560 punches well above its weight in terms of spec for the price. Then we notice an exterior 240v point, a barbecue point and even a port for your aerial so that you can watch television in your awning.

More amazing lighting design is in the shower – a bright blue strip set into the riser bar.

Two curved almost-black doors open into the shower directly from the bedroom. The toilet-washbasin compartment is opposite it.

A sliding door, forward of the shower and toilet rooms, completely segments off the bedroom and en-suite arrangements. Luxury!

Towel provision is good, with a hook and a wide bar in the washroom and a large hinge-down rail in the shower.

The ledge formed by the wheel arch gives you plenty of space to put shampoo containers in the shower.

The bed is enormous by caravan standards, at 1.5m wide and 2m long. The deep mattress feels firm; some may say too firm but it's clearly high quality.

You can convert the lounge into a double bed, using the table as the centre of the base; infill upholstery sections are provided.

As our review progresses and we examine every element of the 560, we discover more surprises. When we raise the bed we find there's a strip of bright LEDs set into the framework; it illuminates automatically.

The under-bed storage area is divided into two sections, with the rear one accessible from an exterior locker. That means you have nearly 2m of width and 1.1m of depth here; more than ample space for awning furniture.

And then there's the forward section of under-bed storage – that's 1.14m x 74cm. The bed is higher than most, which means the storage depth is greater; it's 50cm.

We love the shape of the wardrobes, designed for both practicality and style. They're wider at the tops, curving towards the base, so you get 38cm of hanging width down to jacket level, with the base (where there are two shelf areas) slightly narrower.

There's a shoe cabinet by the door – a brilliant feature which we so much appreciate in our long-term-test Bailey Unicorn Barcelona and we heap praise on the few caravans which also have this facility.

Storage under the lounge is limited to the area under the seating closest to the door. That's because the rest of the under-lounge area is largely taken up by the Truma Combi 6 space and water heater, the water tank, the battery and the power distribution unit.

But buyers won't miss this area because under-bed storage is so generous and well designed – and there are three large lockers above the lounge.

The dining table measures 75cm x 95cm wide; that's larger than most caravan tables. It's also heavier than most, sitting on a substantial telescopic monopod stand and big circular base. Its size is lovely for dining – but less lovely when you're not; we found the table gets in the way as we moved around the lounge.

We quickly discovered how to get the best from the 560's lounge, though –by pushing the table as far as possible to the front of the lounge, thereby creating floor space in the centre of the caravan. In this position, two can sit opposite one another to dine. If more are dining, you simply pull the table back out again.

The enormous table does mean this is much more of a dining room than a lounge, hence our C-rating here; it's not a feet-up relaxing place – but we guess that is what the bed is for.

A television bracket is on the wall that divides the kitchen from the bedroom area. Upholstery is high in quality and practicality; dark brown, leather-effect with fabric inserts. Windows are dressed in panels and voiles; they're not designed to be opened so you can see the view, though.

Cooking equipment in the 560 is a Thetford combined oven grill plus a three-burner hob. There's no microwave, though. The triangular shape of the hob and the wedge shape of the kitchen together mean there's enough surface space.

The sink is circular, big enough to be practical, at 30cm in diameter, and has a smart black glass top with a central hole into which you place your fingers to remove it; simple!

Kitchen storage is ample, with a 53cm –wide cabinet plus two top lockers and two drawers. Both of these drawers, one fitted for cutlery, are beneath the oven, which we think is a tad inconvenient, though. We love the 140-litre capacity fridge-freezer, opposite the kitchen; its position means it blends into the cabinetry almost unnoticed.

At 1600kg the Allegra Home 560 is a comfortable companion for a wide selection of vehicles. We were hardly aware of its presence on the hook of our SsangYong Rexton; perhaps due to Allegra's typically-continental long drawbar, it handled exceptionally stable, out on the lanes of south Lincolnshire, on a route which gave us tight corners, roundabouts and straights where we could get up to 50mph.

There's no ATC stability control, though (this system is so good that we believe all caravans should have it, for belt-and-braces safety) but it can be fitted to Allegras, at a cost of £595.

For the price, the new Allegra Home 560 is astounding value, packed with so many features that you don't expect for £22,000.

The 12-volt-operated built-in step, the amazing lighting design, the lights that come on automatically within the wardrobes and under the bed, the extractor fan over the hob, the roof-mounted extractor fan to take the steam out of the shower…. All packed into a caravan whose furniture gives us the impression it's built for durability. Storage is ample – we love the under-bed design in particular.

Only the low position of the cutlery drawer and the absence of a microwave may draw adverse comment.