An amazing amount of kitchen surface, a phenomenal quantity of storage space, two double beds, all in a caravan that’s just over four metres in body length, weighs only 1,200kg (MTPLM) and costs a mere £21,120. Value? Definitely. Quality? Top class, everywhere. This is a caravan in a class of its own, ingeniously designed and priced to entice new people into caravanning. 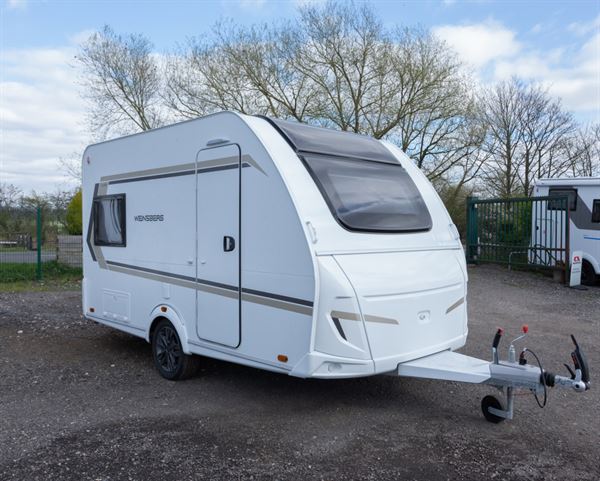 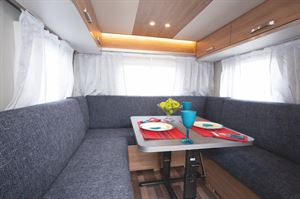 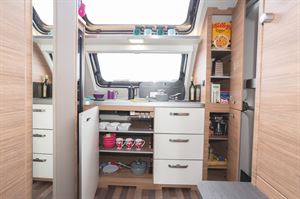 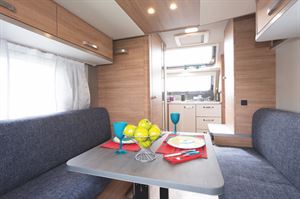 Weinsberg has always been known for innovative layouts – and for cleverly designed compact caravans. The latest caravan from this German manufacturer to arrive in Britain firmly ticks those boxes – and is also the first caravan in this country that has a drop-down bed.

Until now, drop-down beds were only found in motorhomes. Now, Weinsberg (part of the giant Knaus Tabbert group) brings the concept into caravans – and the first one to arrive in the UK is now on display at Barnsdale Leisure, near Pontefract.

The CaraOne 390 PUH stands out from the crowd for another reason: its kitchen is at the front. We know of only one other 2021 caravan in Britain with a front kitchen and that’s also a Weinsberg; an enormous caravan destined for seasonal-site use – and that model is also a new arrival at Barnsdale.

These are not the first caravans to have front kitchens, though. Slovenian manufacturer Adria’s Astella models (imported to the UK before the arrival of the current flagship range Alpina) had front kitchens.

These models, though, were large and heavy. The compact, lightweight CaraOne 390, therefore, breaks new ground.

This is an innovation that will appeal to first-time caravanners who are completely open-minded and looking for the unconventional.

Maybe buyers who have cut their outdoor leisure teeth on tents and now want something that they can use year-round; maybe people who have owned campervans and now want a unit that they can leave on a pitch when they go out exploring by car, rather than packing up everything because a campervan is also your transport.

Yes, it’s a niche sector, by conventional caravan standards. But, in a year when holiday focus is firmly set on Britain and, even as restrictions lift, on the safety of self-contained accommodation, the 390 PUH is destined to find many fans.

So, what about its star element, the drop-down bed? It’s over the lounge, almost totally disguised into the roof.

You might imagine that this would compromise headroom but, surprisingly, it’s easily sufficient for average heights, at 1.8m.

And the rest of the layout? The combined shower-toilet room is amidships on the nearside (the door is on the offside, in continental style).

Immediately forward of the shower room is the tall, slimline, 106-litre capacity fridge/freezer, adjacent to the kitchen. Opposite, the wardrobe, above the Truma heater, gives you 34cm of hanging width plus space in the base for footwear. Storage for folded clothing is limited to four over-lounge lockers.

In a small caravan, the kitchen is an astonishing size. Weinsberg describes it as a ‘panorama bow kitchen’.

That’s because it stretches the full width of the caravan and extends into the corner, with a slightly curved surface. Cooking equipment is simply three burners.

There’s no oven or grill – but there is a generous amount of kitchen storage space in cabinets below the kitchen and a full-height, six-shelf unit alongside, close to the door.

So much space, in fact, that we decided to set ourselves a challenge. Could we stash away, in the diminutive 390’s kitchen, all of the kitchen kit that we have in our own Bailey Unicorn Barcelona’s big kitchen?

So, we packed the stuff from the Barcelona into the car for our CaraOne 390 day at Barnsdale Leisure... To our delight, the 390’s kitchen swallowed all of the kit we’d normally put in our big Bailey with space to spare. Praise indeed for the 390’s kitchen capacity.

So, to the details of this phenomenal capacity: three 50cm-wide drawers and a three-shelf cabinet, 1.30m wide, with shelves disappearing off to the left of the 60cm-wide door; a clever, if hidden, use of space.

In addition, there’s a tall, six-shelf cabinet, 26cm wide, by the door, plus a shelf above the fridge/freezer, a cabinet below the fridge and another above the kitchen window.

We loaded in two lots of pasta, a hand blender, loads of biscuits, an American pancake muffin mix, a large grater, three porcelain serving bowls, a set of plates, bowls and mugs, plus pans… We could have hidden away much more, and we didn’t even use the space that hides away to the left of the main cupboard door.

The combined shower-toilet room is also impressive in terms of hideaway capacity. There are two cabinets, one under the (surprisingly large) basin and one on the wall, together providing more than adequate space for all showering accoutrements.

There’s shelving aplenty, too, running along the whole width of the compartment, alongside the basin and also below this shelf, in a recess which is handy.

The tap extends on a hose to form the shower rose. A curtain tracks around the shower area to confine shower water and there’s a hinged towel rail mounted in the ceiling, plus two hooks on the walls for robes, etc.

There’s another surprise in the washing department: the toilet has a ceramic bowl; that’s a feature usually only found in high-end caravans, yet the 390 is not much over £20,000.

The U-shaped lounge seating is splendidly spacious, and the table is nice and large, at 85cm by 80cm. It has a robustly engineered mechanism that enables it to be lowered to form the base of the main double bed, which is 1.97m by 1.89m.

Four spotlights in the bed base plus concealed lighting above the rear window and two oblong bright white lights set flush into the ceiling together provide enough illumination for evenings.

The pretty, high quality voile curtains and panels add to the continental ambience.

Then there’s the 390’s defining feature. Do you call it a double bunk bed? Certainly, there are two double beds one above the other. Weinsberg calls it a ‘lifting bed’.

Whatever terms you prefer, this bed measures a generous 1.96m by 1.42m. You transform the lounge into a double bunk bedroom by pressing a release button and pulling the bed down. It’s simple and quick. The lounge backrests come down and complete the mattress of the lower bed and, it is very comfortable.

There’s a sturdy wooden ladder provided but, when it’s in place, it’s not possible to open the washroom door, so a little organisation has to take place to ensure you don’t need to do that when people are in the top bed. That, though, is the only downside to this ingenious arrangement.