At not much over £25,000, this 7.3m-overall-length tourer is remarkable value for money. Stacked with sophisticated niceties such as the dimmable stalk spotlights that you can turn to white or blue, with spec that includes an onboard water tank, generous storage capacity, robust, solidly made furniture, and with one of the longest kitchens in any caravan, the 500 UF easily holds its own amid £35,000 caravans. 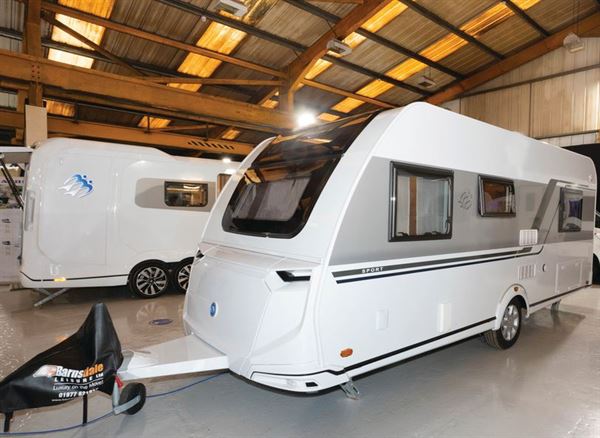 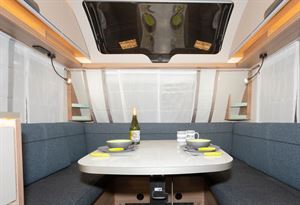 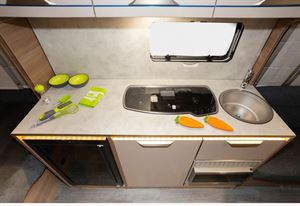 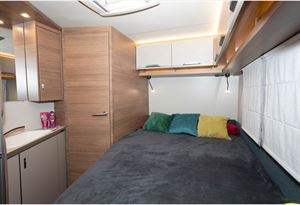 Imagine a tourer that has a kitchen stretching 1.68m, a U-shaped lounge that’s 2.7m by 1.4m, a double bed, and gigantic storage capacity that includes a wardrobe, plus a large, full, height, shelved cabinet beside it… An enormous caravan, you might assume. Yet the Knaus Sport 500 UF is only 5.28m in body length. And its weight is a modest 1,500kg MTPLM.

On figures and dimensions alone, there is a lot to like about this German-made, single-axle tourer. It was when we came to examine the details, though, that we began to realise that the Knaus Sport 500 UF is incredible value for its price tag.

This new model had just arrived at Barnsdale Leisure on the day of our visit. It’s in the showroom, where there is no natural light. So, a brilliant opportunity for us to assess its lighting efficiency after dark.

Each of the four corner spotlights, on long, flexible, black stalks, has a touch-control base. One touch puts the light on, and a second touch takes it from bright white to blue night-time mode. And the white light is dimmable. Very refined.

Lighting is concealed within shallow, recessed shelves that run most of the way around the caravan, under the 10 top lockers. And a bright strip of LEDs runs in a recess at the edge of the kitchen; the spacing between the LED bulbs gives the impression of miniature spotlights reflecting off the brushed steel edging. Stunning.

Everything you touch, open, close and move is top-notch quality and robustly constructed. And there are lots of refinements – among them are the fine voiles and lovely two-tone grey panels that have weights sewn into the hems so that they always hang perfectly straight.

The kitchen surface and splashback are both bleached wood style, pale grey and very attractive. The hob is an inline three-burner; a notice on the hob cover indicates the pan sizes for which each of the burners is designed. The pan stand is cast iron and can be removed in two sections for easy cleaning.

The 1.68m length of the kitchen means that surface space is exceptionally plentiful; that’s one of the 500 UF’s chief attractions, for its ease of use and appeal to keen cooks.

The only fault we could find with this superb kitchen is that the (31cm-diameter) sink is close to the forward edge of the kitchen, meaning that water could splash onto the seating fabric.

Storage space is plentiful. The three top lockers are each 54cm wide. The lower cabinet is also 54cm wide. It contains two shelves and there is space beneath them, although this is slightly compromised by water piping and the wheelarch.

The cutlery drawer (48cm by 39cm) has six large recesses. Beneath the cutlery drawer is a microwave, with a touch control panel. It’s an LG Smart Inverter Magnetron model, designed specifically for even cooking. This kitchen has a neat little surprise: you may wonder what the purpose of the black circle is, on the front of one of the kitchen lockers. It’s a magnetic base. The idea is that you can pop things like shopping lists there, secured by a tiny magnet. And it’s strong enough to hang keys on; we tested its capability with the photographer’s quite heavy car key bunch – that’s a car fob, a caravan key and two door keys – and the magnet would have held still more weight.

The kitchen’s large storage story continues elsewhere, with a 58cm-wide wardrobe (a light comes on automatically when you open the door). Alongside it is a five-shelf, full-height cabinet, 47cm wide.

The storage space under the lounge seating is super-easy to access. That’s because the upholstery is fixed to the hinged wooden bases that also form the tops of the lockers, so raising the tops is a fingertip action. Even though there is an on-board water tank under the seating, the available space is generous.

Under the bed, the storage space is accessed both from the outside, via a 98cm by 38cm hatch, and from the inside. In typical Knaus style, the slatted bed base is constructed in two sections. The one adjacent to the wall is fixed (so you can get at the contents via the outside hatch), and the one nearer to the centre of the caravan rises, supported in a gas-filled hinge.

The showering and washing arrangements are, by today’s British caravan layout trends, unusual, with what might be termed a vanity area in the bedroom and the shower/toilet compartment in the rear offside corner. The vanity unit is well designed, with a large basin, two double hooks for towels, and two cabinets. The cabinet below the basin is wedge-shaped and has a generous capacity. The wall cabinet has two shelf spaces.

Two very bright spotlights illuminate the mirror/basin area well, reflecting in the mirror, so that it looks as if there are four lights – and making the whole vanity area look larger than it is. The advantage of the 500 UF’s presence in the showroom, where it relies on its own lighting, enables us to accurately assess the illumination levels as if the caravan were being used after dark – and in this little corner, lighting is at a good level.

In the shower/toilet compartment, two shelves take care of shampoos and the like. A towel rail hinges down from the ceiling and there’s a double towel hook on the wall. The toilet is the Dometic model that has a ceramic bowl; a nice refinement that you wouldn’t expect to find at this price. There’s a curtain to confine shower water.

The more we examined the 500 UF’s finer details, the more we became impressed. For example, by the door is a television bracket, a double coat hook, a mirror – and, importantly, a large cabinet that’s perfect to put your shoes in as you step inside. The 500 UF has four mains sockets. Two are above the lounge; one is by the TV bracket. There’s one in the kitchen; we think another one here would be useful – because there is plenty of surface space to put a toaster or a coffee machine. There’s also a USB socket above the bed – and shelving on which to put your phone while it’s charging here.