This is a sophisticated tourer packed with style. The layout is cleverly designed to offer flexible family accommodation, and the bunk that can be transformed into a large top locker exemplifies the ingenuity that Knaus is showcasing in this caravan. Only the compact nature of the combined shower/toilet room may raise eyebrows, given the luxury everywhere else in the 590. 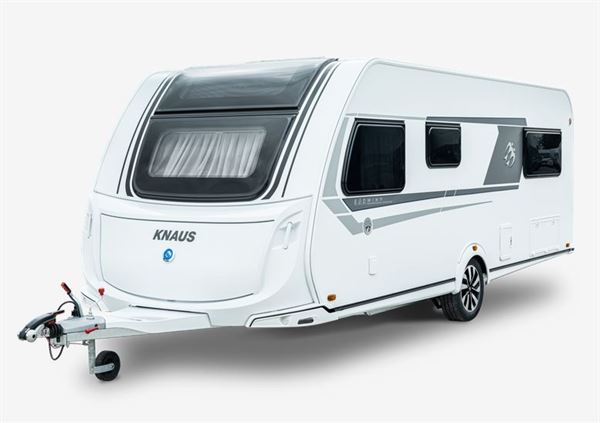 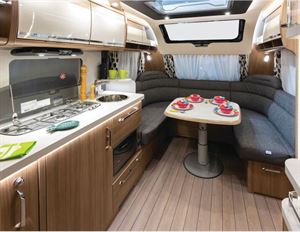 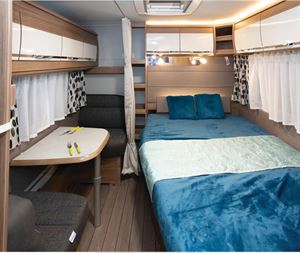 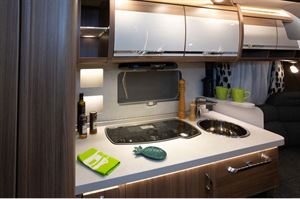 As you step inside you notice one of those ingenious features. It’s a coat rail, in a recess alongside the door and, beneath it, there’s an outlet for warm air generated by the Alde heating system, so wet garments will dry quickly here.

By the door there are two cabinets for shoes; that’s one with two shelves, near to the coat rail, and a second, on the opposite side of the door. We haven’t yet come across another caravan with two shoe cabinets!

Another surprise is the bunk bed arrangement. Alongside the fixed double bed, at the rear, is a dining area for two that transforms into bunks – not, though, as you may assume, by rising a bunk base from alongside the wall. The top bunk is cleverly disguised. The lockers above it transform into the bunk base; you press two button-catches to release the entire locker assembly, which smoothly and easily hinges down, to rest on ledges at each end.

A robust-mesh panel clips to sockets in the roof, to prevent anyone from rolling out of the bunk. The mattress is stowed within the locker. It’s not just the ease of operation of the bunk that is impressive. The really clever bit is that, should you not want to use this bunk, you can remove the mattress – and use this space as full-sized lockers.

The lounge, which wraps around the entire front end, can be transformed into a double bed, using another impressive piece of engineering. The table sits on a chunky, monopod base that is telescopic, in three sections, and lowers down to the level of the seating around it, to form the central area of the bed base.

The more we explored this Alde-heated, spacious caravan, the more we were convinced that it feels and looks good value for its £35,650 price tag. Everything about it is substantial and superbly engineered. One example is the gas bottle locker, which rises upwards, on two giant hinges, to sit parallel to the front of the caravan. The lock and handle are disguised under a circular disc bearing the Knaus logo; another refined feature.

Décor is delightful, typically continental in styling; for example, there are voiles and panels, rather than curtains. Top lockers are finished in gloss white, with stylish chrome handles that sit on chrome strips of the same depth. Below the lockers in the lounge are shelves; the designers have used every inch of available space to create storage opportunities. Even the door plays its part in the storage story. There’s an umbrella holder. When not in use, it folds flat to the door; when you need to use it, the top flips open. And alongside is another surprise: a beautifully crafted bag, with the Knaus emblem embroidered onto it, which sits on two hooks. A magnet hidden within the bag’s structure makes sure it stays flat to the door. A neat touch.

The kitchen contains more surprises. The inline, three-burner hob has a cast iron pan stand. And the sink is the deepest we’ve yet found in a caravan, at 19cm. Directly above the hob, set into the top locker base, is a Dometic extractor fan with two inset lights.

Three bright spotlights beam down from a wooden panel above the lockers, and a clear acrylic shelf alongside the top lockers has an LED strip built into its rear edge that illuminates the entire rim of the shelf, rather like a light-pipe; clever! Two square recesses within in the splashback contain lights, too, making this is a very well-illuminated kitchen.

Kitchen storage wins our praise, too. The main cabinet is 56cm wide and contains three shelf spaces. Alongside, three metal basket-style shelves pull out on a runner. Under the sink is a drawer containing a huge cutlery tray, 49cm wide, with six divisions. Beneath the combined oven/grill is another drawer.

The kitchen surface is 1.35m long. With the glass hob top down, there’s a huge amount of surface space. And, alongside the sink, is yet another piece of Knaus ingenuity: a shelf, curved to follow the shape of the sink, in the perfect position for a kettle, and two sockets are just above it. There’s also a double USB socket set into the shelf alongside.

By the fridge is an exquisitely styled drinks cabinet, backed by mirrors with edging that glows pale green in the light from the LED strip that is concealed alongside one of the mirrors.

The dining table is a generous 83cm by 90cm. There is easily enough space for six around the table. It’s a delightfully comfortable eating and lounging environment, with raised sections at the corners that form headrests. The double bed that can be made up here measures 2.18m by 1.46m. The fixed double is 1.98m long and 1.35m at the widest point, tapering slightly to allow for corridor space. The mattress and the base are both in two sections, to enable easy access to the under-bed storage area.

The storage areas under the two-person seating area alongside the bed are cleverly designed; the seat bases are reinforced, so that they double as the lids of the storage areas. The result is that opening these spaces is quicker and easier than those usually found, with bases that are separate from the seating upholstery. Five top lockers are around the double bed and there are shelves alongside the bed, and in the corner of the bedroom.

The shower shares the compartment with the (ceramic bowl!) toilet and washbasin. The tap comes out on a hose and sits in a clip at roof level to use as a shower rose. The compartment is well-equipped with shelves (six), and there is a wall cabinet containing three shelves, plus another under the basin, with two shelves. There's also a towel bar that hinges down from the roof.