At £32,839, the 590 UK is among the most expensive family-layout caravans on the British market. Value? Brilliant layout apart, you pay for what you get – and, in the 590, you get not just the top quality you’d expect at this price, but stacks of ingenuity and practicality, too. 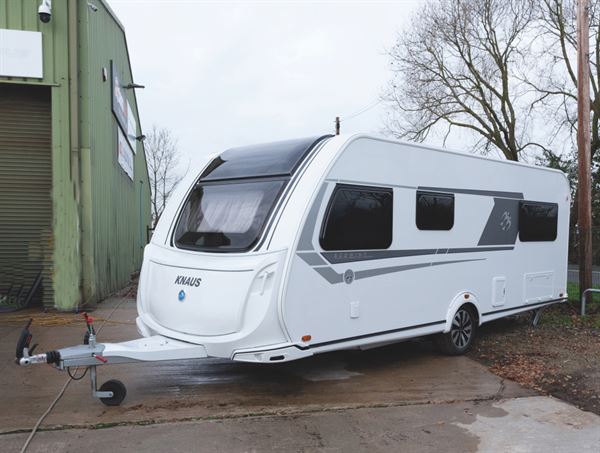 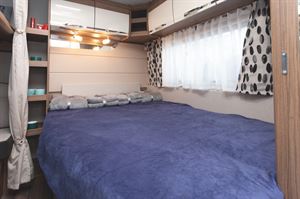 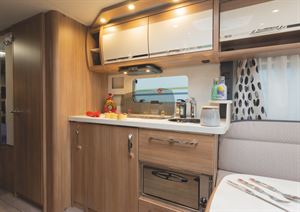 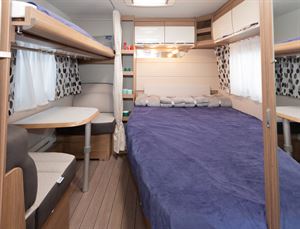 From Germany comes a six-berth caravan like no other. The Knaus Northstar 590 UK has a rear bedroom with a unique layout: there’s a double bed, plus a dining area that can be transformed into bunks.

So, in day mode, it’s the ‘breakfast room’, or the kids’ dining area. At night, it turns into two bunks. And there’s more. You can leave the top bunk in place and still use the lower area for dining because there is enough headroom. That’s awesome adaptability.

New for 2021, the Northstar range replaces the Starclass, as the Knaus flagship range.

Only the Elddis Avanté 868 and Compass Casita 868 (identical except for décor) come close to the 590 UK in terms of layout on the British market.

The 868 also has bunks alongside a double bed in a rear bedroom, but these bunks can’t be transformed into a dining area. (It’s £25,244 plus delivery and it doesn’t have Alde heating, so is in a different market bracket to the Northstar anyway.)

Knaus, the giant German company that also makes the [email protected], Weinsberg and Tabbert brands, invented, with the Northstar 590 UK, a caravan with great versatility and wide appeal.

It will interest couples who want an auxiliary dining area; couples who occasionally have grandchildren joining them – and families who want a six-berth caravan. The lounge transforms into a double bed.

This caravan is stacked with ingenuity and practical features. We’ll start at the door… Alongside it, there’s an alcove with a rail for hanging coats and a locker for shoes.

Two small coat hooks on the door fold out when in use. Two more hooks are set into a recess in the lower section of the door, this time supporting an elegant leather- look shopping bag with the Knaus name embroidered on it.

We went to Barnsdale Leisure, near Pontefract, to spend time in the first Northstar 590 UK to arrive in the country. By the time we’d fallen in love with the versatility of the dining bunk area and the practicalities surrounding the door, the Northstar was nicely warm – from the floor.

This caravan’s Alde heating system includes underfloor heating; piping is built into the floor. A carpet is supplied but we decided we’d rather feel the full effect of the heating through just our socks.

Warmth rises from behind the lounge seating and alongside the bed, as with a conventional Alde system – but not many caravans have heat outlets between the kitchen surface and the wall! The 590 UK warmed up and was very toasty within an hour, on the cold December day of our review.

Cooking, Northstar-style, is typically continental in design: a three-burner-in-line hob, plus a combined oven-grill – with a light inside it so that you can easily inspect cooking progress.

An extractor fan is directly over the hob and two spotlights are set into it, augmenting the already excellent lighting from the three spotlights set into the ceiling above the lockers.

There’s a 1.35m stretch of kitchen surface and plenty of space around the hob and sink to get organised when cooking.

All have very robust and neat positive catches that operate with a simple flick action. Opposite the kitchen is an extra cabinet, by the door. It’s 50cm wide and has two shelves.

The fridge/freezer is the Dometic 177-litre capacity model with doors that can be opened from either the left or the right side.

The dining table is a generous 85cm by 80cm and sits on a single telescopic leg that enables it to descend to seat-base level to form the centre of the double bed that you can make in this area. The bed measures 2.18m by 1.4m.

If the 590 has an Achilles' heel, it’s the washroom, where the shower shares space with the (ceramic bowl) toilet. But there is a device here that mitigates the clingy shower curtain problem. An air-filled tube is built into the shower curtain. It holds the curtain in an approximate circular shape, so that the fabric doesn’t cling to you.

The washbasin tap is also the shower rose; it extends on a hose, and clips into a support on the ceiling. Two cabinets and six shelves take care of the wash-time necessities and a hinged towel rail is mounted in the ceiling.

The Northstar’s Scandinavian styling imbues a distinctive character. Stark gloss white mixes with black and cool grey – and yet there’s a cosiness about this caravan, and unmistakable quality in every aspect of manufacture from furniture and fabrics to hooks and cabinet catches.

The gas bottle locker impresses, too, with its width (almost the whole width of the caravan), its capacity, and the robust hinge mechanism that raises it upwards, parallel to the front of the caravan.