Coachman describes the Lusso as exceptional and we have to agree. This is a superior caravan in every way, and the exterior, like the interior, is stunning; slightly rounded, with understated elegance much like a top-echelon car, the Lusso is every inch quality and style. 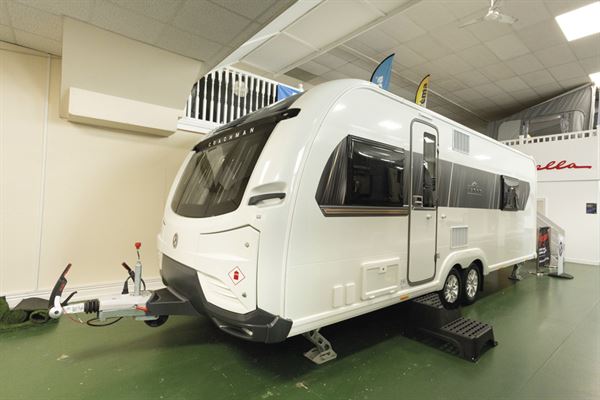 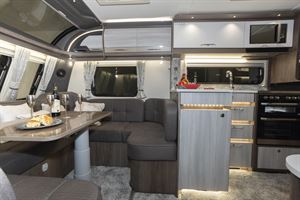 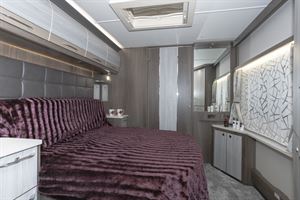 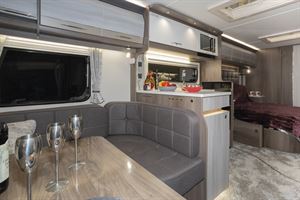 With Caravan magazine's new online subscription partner, readers can now sign up and access years of superb content – including caravan reviews. Use the search bar below to find the content you're looking for (for example, Coachman) and you can read the Caravan archive dating back to February 2013.

The Lusso is the first British-made tourer to break through the £40,000 barrier. So, what’s special about the caravan with an Italian name that translates as ‘luxury’?

What’s going to lure buyers to spend around £4,000 more than any other mainstream British caravan?

For a start, there’s the first impression: every inch of this caravan prompts thoughts of luxury yacht styling, or the best in cruise ship cabins.

Then there’s the layout. The Lusso has a transverse island bed, a rear shower room and a central kitchen. Those elements are not unusual. The lounge, though, is something totally different. The seating wraps around three sides of the lounge area and extends into the fourth side, bordering the kitchen. The table sits in the centre, on a monopod base and six people can comfortably surround it.

Not that the eight-foot-wide Lusso is designed to sleep six; more, it’s designed for entertaining – and for feet-up relaxing on any of three seating sections.

The table is of a clever design with a mechanism that allows its top to be moved laterally on its base, to maximise on space for getting in and out.

The seating is fully sprung. The backrests are higher than you’d normally expect to find in a caravan and, in the two front corners, they have raised sections, so that you can rest your head against them.

And there’s more. A lot more, as was revealed at our day at Campbells Caravans at Lostock Hall in Lancashire.

As you’d expect from a caravan manufacturer that now makes seven maximum-width tourers, the Lusso is 2.44m wide.

Three large rooflights ensure daylight comes into all areas of the caravan in quantity. And the interior lighting is very bright – and creatively designed.

The kitchen is L-shaped, with a surface measuring 1.08m by 50cm to the left of the sink, which is a whopping 40cm in diameter and 15cm deep; almost domestic sized. The fridge/freezer is the 177-litre capacity model with a door that can be opened from either side.

Beside it is a cabinet; the perfect place for a coffee machine, perhaps, and there’s a bracket for your TV above. USB ports plus mains and TV points are here.

The kitchen worktop is Corian, which is used in high-end domestic kitchens and also in the superyacht market.

The hob has a cast iron pan rest. And the oven is Thetford’s new fan-assisted model. The top kitchen cabinet and microwave surround have a white acrylic finish that looks like glass.

Positive catches are on all of the cabinetry. And there’s an extractor fan mounted under the top locker, directly above the hob, with a touch control panel and variable speed control.

Lighting runs under the surfaces and lockers. Strips of light run between the three deep drawers, all of which have positive catches.

The bedroom is fabulously luxurious. A dressing table angles and curves its way along the wall at the foot of the bed all the way from the shower room to the wardrobe, which is wedge shaped and divided into two sectors.

Lights come on when you open the two doors to the 70cm of hanging width. Double doors open to shelf space under one wardrobe sector. In the other, are three drawers, with positive catches.

Lighting runs under the curtain pelmet and subtle lighting illuminates the wall above the dressing table.

Bedroom storage is exceptionally generous. In addition to the capacious wardrobe and dressing table cabinet, four lockers are over the bed and there's two drawers in each bedside cabinet.

There are mirrors on each side of the bed, above the bedside cabinets, and a huge (56cm wide, 1.06m deep) mirror on the wall alongside the dressing table.

As you’d expect, given Coachman's reputation for excellence in shower rooms, the Lusso’s preening department is utterly superb.

Nice design touches include a grey mottled stone-effect panel in the shower cubicle, a beautifully styled oval top-mounted washbasin, and a superb white, domestic-design tall, towel warmer. Even the toilet is worthy of comment; it has a ceramic bowl.

The Lusso makes several very bold statements. That caravanning now has an option that is every bit as luxurious as the best in hotels. That, if you want the very best in caravanning, this is probably it.

That a caravan really can have more than a passing resemblance to a luxury cabin on a cruise ship or yacht. And that attention to detail combined with the highest quality creates a fabulous caravan.

There are several real top-grade caravan ranges on the market, of course, among them, Coachman’s own Laser Xcel. All of them provide brilliant options for buyers who are seeking luxury. However, the Lusso does truly take luxury caravanning to a new level.

Any way you look at it, the Lusso is utterly fabulous. We had read the details on Coachman’s website and seen the list of equipment and gadgets. But, until we stepped inside this fabulous caravan, we didn’t appreciate how special it is.

So, we would recommend that you go and see one, and you'll be won over, just as we were.

All the components you’d expect from a top-end caravan are here. These include an alarm system, ATC stability control, six mains sockets and two USB ports, a Whale Watermaster exterior connection so that you can draw water straight from a tap on a pitch, the Alde load limiter which automatically turns off the heating when you are using an appliance, and an underfloor-mounted water tank.

The Lusso also has E&P’s self-levelling system, and even a wireless phone charger built into the front windowsill.