This is a lot of money for a caravan, but the mighty twin-axle 875 provides bags of value for that figure – everything about the Xcel is reassuringly robust and refined 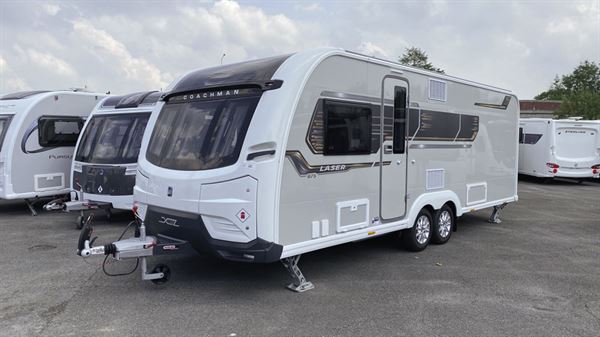 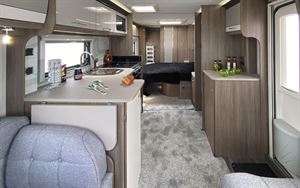 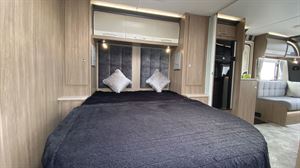 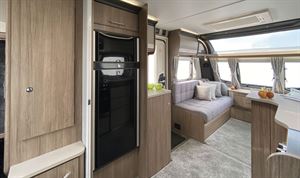 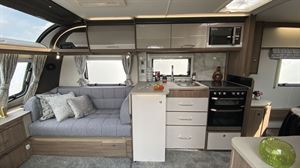 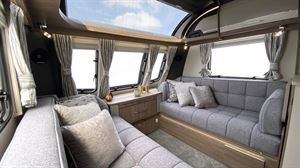 Coachman embraced the super-wide generation of tourers with three models for 2020.

One is a five-berth in the new Acadia range and two are introduced to the Laser range, long renowned for top luxury spec levels. Both of these are four-berths. Both have island beds. One is the 850, with its bedroom at the rear. The other is the 875, with the shower room at the rear. That’s the one we chose for this review, for which we visited Campbells Caravans, at Lostock Hall, Preston.

At £35,400, you’d expect the best in spec level – and the Xcel delivers amply. You don’t even have to lower and raise the corner steadies. That’s automatic, thanks to the E&P self-levelling system that comes as standard. It levels the caravan using giant, under-axle jacks and powered corner steadies, all operated at the touch of a handset button or a keypad in the doorway.

The Xcel charges your phone for you, too. A charging pad is built into the front windowsill area; it’s suitable for the iPhone 8 and Samsung 7, plus more recent models.

As you’d expect, the heating system is Alde. You’d also expect an on-board water tank. You might not expect, though, a fridge/freezer with doors that you can open from the left or the right.

Important? No, not really. Just super convenient. And you’re unlikely to expect a small green device called an alignment tool. It’s essential equipment for when the 13-pin car-caravan connector slips out of alignment; a quick twist puts it straight. Even though these little devices are sold at caravan accessory shops, it’s great to see that one arrives as part of the Laser kit.

The list of Xcel standard kit goes on... An extractor fan over the kitchen, lighting below and above the kitchen units, Al-Ko’s ATC snake control system, Phantom's Vanguard alarm system with PIR and tilt sensors and a key fob that controls the awning light.

The layout, with the bed aligned across the caravan and the shower room behind it, is high up among the most popular right now. When this layout comes in an eight-foot width and twin-axle, 7.98m length, though, you get something really special – a caravan that resembles a mini apartment.

That’s the impression the 875 conveys. Yes, the layout is open plan, with the bedroom visible from the lounge, but the three segments – lounge, kitchen and bedroom – actually feel quite separate.

The L shape of the kitchen forms a clear demarcation between kitchen and lounge. And the two part-walls at the rear of the kitchen give the bedroom a nicely secluded feel. We love the USB ports built into the over-bed spotlights – and, even more, the fabric pockets on each side of the bed in precisely the right position to place phones. And the luxurious, ultra-deep, velvet-upholstered headboard is utterly gorgeous.

The bijou apartment feel is perhaps best exemplified by the shower room. High-end domestic-style stone-effect panels are in the shower cubicle and above the washbasin. Tiny but bright spotlights are set into the ceiling. And towel provision?

That’s first-rate. A large, heated towel rail is on the rear wall. A loop and a hook are just outside the shower cubicle. And, inside the cubicle, there’s a neat, fold-down bracket of three hooks. All this combines to help create the Laser air of sophistication and refinement.

Yes, £35,400 is a lot of money for a caravan. And, yes, the mighty twin-axle 875 gives you bags of value for that figure, in terms of its high spec, especially the self-levelling system that comes as standard. On top of that, it’s the Laser finesse that creates a caravan of immense sophistication and super luxury appeal. Everything about the Xcel is reassuringly robust and refined, from the smooth whirring sound of the levelling mechanism to the solid clunk of the double opening fridge door and the fine fabrics of the six cushions and curtains. The Xcel is excellent in all ways.