Adora is Adria’s best-selling range, so it was natural that the Slovenian manufacturer would introduce a layout that’s a top seller for other makes. The Tiber is astounding value, for top-class robustness of build and furniture, a superb array of cleverly designed refinements, Alde heating and eight-foot width, in a layout that has sure-fire appeal. 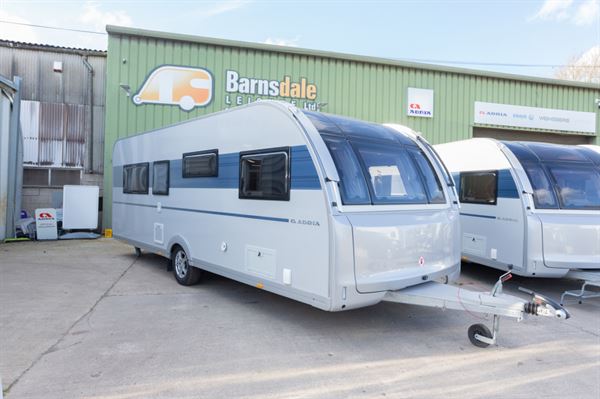 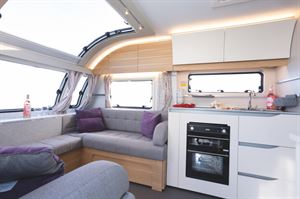 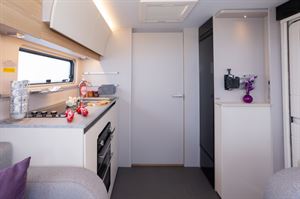 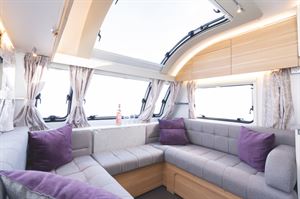 Back in the summer of 2020, Adria announced that a rear island bed caravan would be joining the 2021 Adora line-up. Now, the much-talked about Tiber has arrived in Britain – specifically, at Slovenian manufacturer Adria’s largest retailer, Barnsdale Leisure, near Pontefract, in Yorkshire.

This model’s unveiling has caused a buzz for months. Even before its arrival on British shores, several Barnsdale customers had already placed orders, off-plan, in just the same way as one might do if buying a new-build house.

Such is the demand for this long-awaited model that customers were not going to wait for its arrival in order to see it – they wanted to be the first in the queue to get one.

So why is the Tiber such an exciting arrival? Firstly, it’s been eagerly anticipated since summer 2020, when Adria unveiled the new Adora range as a line-up of three – the Isonzo (with a transverse double bed), the Seine (with twin beds) and the six-berth Sava – and announced that the Tiber would arrive some months later.

Secondly, this caravan’s layout is right up there among the most popular currently, with a rear island bed and central shower arrangement. And thirdly, Adria has already established high demand for this layout in its lower-priced, lower-spec Altea range, in the Dart.

Now, the caravan market has all of the Dart’s charisma and practicality in a caravan that is wider and has the luxury of the Alde heating system (the Dart has the Truma system).

The domestic-style, hot water-based Alde system will ensure the Tiber’s appeal to year-round caravanners (the all-cocooning, evenly distributed heat of the Alde system is regarded as superior in cold weather), and the extra width – 17cm – means that all three segments of the layout are more spacious environments.

There are other differences between the Tiber and the Dart. The Tiber has an oven and separate grill above it, whereas the Dart has a combined oven/grill.

The Tiber has an Al-Ko Secure wheel lock receiver. The bed is 7cm wider, at 1.54m (and it’s a generous 1.96m long). And, of course, there are differences in the décor and fabrics.

There’s also something ingenious and very distinctive about the 2021 Adoras: small pockets and shelves that can be moved around the caravan as you wish.

They’re made of a robust fabric-like substance and are mounted on clips that sit on rails in the bedroom, around the kitchen and at the front corners of the lounge.

You simply put them in places where you need them; for example, to sit phones near to the USB points, and change their locations as you wish; there are six in all.

Another unique feature of 2021 Adoras is the cushions that are designed to sit at each of the front corners. They are a linked series of four bolsters.

You can fold them in half or curl them up into a circle. You can place them vertically or horizontally. You can use them as lumbar supports or headrests.

You could turn them grey side upwards so that they blend in with the upholstery, or you can let the deep, rich purple colour on the other side form a statement.

Any which way you use them, these are comfortable cushions. And, for added comfort and colour, there are four scatter cushions: vivid green, turquoise and two purple.

Style and refinements are aplenty. Lights that run above and below the side top lockers are dimmable. All of the lockers have positive catches. There are two USB ports by the television aerial and power point next to the TV bracket that faces the lounge.

There’s another TV bracket in the bedroom. Curtain fabric is luxurious; a combination of white and palest fawn – and the curtains in the bedroom are more than twice the depth of the windows, adding to the ambience of this haven of luxury.

Read lots more caravan reviews using our in-depth digital library, where you can access articles from Caravan magazine. The search function helps you to find content you're interested in. Use the search bar below to look up reviews - why not start by typing in 'Adria'?

In the washbasin-toilet room are another couple of nice touches.

The top cabinet has a soft close mechanism. And there’s a toilet brush, in a smart chrome container; Adrias are the only caravans to come complete with toilet brushes!

The shower and toilet area benefits from the eight-foot width in that the 74cm space between the two compartments makes this a really good towelling/dressing area.

The toilet room door opens across the caravan to divide this area from the kitchen.

The rear door to the corridor slides almost out of sight parallel to the shower compartment wall.

Every door, every drawer and every cabinet are solidly constructed; after all, Adria has built its reputation on robust construction and high build quality and everything in the Tiber exemplifies this.

Cooking equipment is a microwave (nicely hidden in one of the two concave-fronted lockers above the kitchen), an in-line three-burner hob, and a grill and oven.

Kitchen storage arrives in the form of two drawers and a drop-down-door cabinet, all 50cm wide, plus a 13cm-wide, two-drawer pull-out cabinet.

There’s a cabinet beneath the 140-litre capacity fridge/freezer and a small locker above it, too.

In total, this amounts to plenty of storage space. 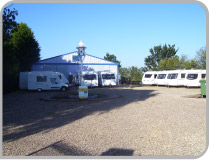