A brilliant caravan for a young family of six. We love the Tamar’s practical layout and light weight. All you need for great family holidays is here. And at a low budget price. 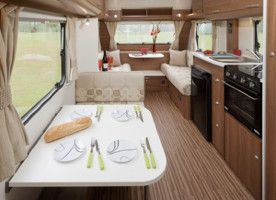 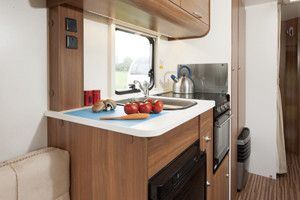 With three bunks in a stack, the Tamar is specifically designed for families with young children. This sleeping arrangement is pretty much perfect for little people, especially if one of the young caravanners is still at the tumbling-out-of-bed stage; the bottom bunk is only mattress-depth from the floor so any rolling out of bed incidences wouldn’t incur any bruises.
Alteas are Adria’s lightest, least expensive caravans; there are two six-berths, the Severn, with bunks within a rear family room, and the Tamar, with a nearside dining area that makes into a single bed.
It’s a practical layout that provides well-planned sleeping arrangements and, just as importantly, two areas for daytime activities.
But perhaps the greatest surprise in this relatively compact caravan length is the size of its shower…


The shower, toilet and washbasin are all in one room. But before you file this room under “small and needing to be mopped after every shower”, read on… This one is different from what we think of as standard unitary washrooms. The shower area is large (75cm square) and, crucially, has a channel running around its edge, to direct water to the two plug holes. A curtain tracks around the line of the recessed channel to keep a lot of the water inside it. And the shower room is plenty large enough for a parent to lend a hand when it’s shower time for the young ones.
There’s a plastic rail for a small hand towel above the toilet and three hooks on the offside wall of the shower room. A shelf runs along the rear wall. There’s a wall cabinet above the toilet plus a cabinet under the basin. An outlet for the Truma blown air central heating system is in the shower area; for maximum towel-drying efficiency, if you close the other three outlets, you can direct most of the warm air into the shower room when you need it there.

This is where the Tamar is a real star. The caravan that takes its name from the river that divides Britain’s two most popular family caravanning counties, Devon and Cornwall, excels in terms of family accommodation. Those three bunks each have large windows – and small lights with shades imprinted with little images of cute elephants.
Children love bunk beds; they love climbing – and they love fiddling with switches, which is why we are not certain the centre bunk is the best position for the temperature control for the central heating system. (The heating system is gas-only; the £390 Altea Pack gives you the ability to use it on electricity.) The young potential heating controller who sleeps here has the power at his fingertips to select the heating current draw to 500W, 1kW or 2kW. And to govern the temperature by a dial. So if the caravan is too cold or too hot in the morning, you will know where the blame lies!
The length and width of the bunks are of adult proportions. (They’re 72cm wide and 1.9m long.) But when the kids become less kid-height, they’ll notice the inevitable lack of headroom that the triple bunk arrangement provides. No such problem for the occupant of the bed that you can make up in the nearside dining area, though; the tallest offspring can have this one. It’s 80cm wide and 1.92cm long.

You get into the storage under the lounge and dining areas by lifting the wooden tops. There are no supporting hinges, so you have to hold them up. This comment, of course, compares the Tamar with most British-built tourers, which have gas-filled or metal spring hinges, or front access. We’re not criticising the Tamar, though; holding up bed box lids is a small task-price to pay when you consider you are getting a lightweight, 1300kg MTPLM caravan for little over £13,000.
The wardrobe, which provides full hanging depth, is above the heating system unit. Alongside it, a cabinet contains four shelves plus an area at the base that’s slightly compromised by gas taps and heating ducting but nonetheless offering space for a few pairs of trainers.
The five top lockers (three above the dining area and two above the lounge) are reasonably large. In addition, there’s a good amount of shelving; ideal for DVDs and books.

With two dining areas the Tamar is well up to the mealtime task for a big family. The side dining area is just about large enough for four small people and the lounge dining area is amply-sized for four, of course. So with six aboard, depending on who needs help with cutting food, there are options about where to sit.

For lounging, Tamar-style, read “lounging and playing”. The side dining area is perfect for table-top activities and there are mains power and TV aerial sockets nearby on the dresser that divides the dining area from the lounge. The lounge, with a hinged coffee table at the front, is adaptable to many needs; there’s a power point in the vicinity, and the coffee table is large enough for a laptop. The weather turned rainy on the Wednesday of our test week and so it was easy to imagine six inside the Tamar, with no prospect of playing outside. We felt sure that this is one caravan in which you really could cope without an awning being a necessity.

If there’s one area that’s confined in terms of practicality in the Tamar it’s the kitchen surface. There’s only a small amount of surface to the left of the sink; it’s 30cm wide. So you’d have to use one of the   tables when it comes to putting food on six plates. But, when you get organised, that’s not difficult.
Cooking arrangements are a combined oven-grill and three burners, one of them large enough for a wok. Below the oven-grill is a large cupboard; that’s the advantage of a combined oven-grill. It’s smaller than a full-sized cooker so you get more storage space. Between here and the fridge are three compartments – two drawers and a cabinet with a hinge-down door below. And three shelf spaces are opposite, in the dresser. In total, lower kitchen storage is workable for the needs of six. In addition, two top cabinets will accommodate a good amount of stuff.
A mains socket is fitted inside the forward cabinet but, because there’s a shelf in this area, you couldn’t install a microwave oven and there is no vent, so the presence of the socket is a bit of a puzzle. There is a more usable socket on the forward end of the kitchen, for a kettle, perhaps. If you want a microwave, you’d need to buy a very small one and put it on the dresser when it’s in use. For our money, though, cooking, Tamar-style, is best done on the hob and in the oven-grill.

With only 1300kg MTPLM the Tamar is suitable for a wide range of cars so we expected great things of it on its tow test behind our Kia Sorento which takes all our review caravans out. We expected it to be nimble on cornering (a tick there), and minimal on power drain (another tick, though with a 2.5-litre engine that was always going to be obvious). No high wind or large, speedy overtaking vehicles were encountered to potentially deflect the Tamar from the straight and narrow during its test but nonetheless if we bought this caravan we’d be buying the Altea Pack, which gives you a hitch-head stabiliser.