If light weight and low price are your priorities, you need beds for five, you like the idea of having two lounges and you’re influenced, also, by the lovely plain white and fawn décor and attractive lighting design, take a long, close look at an Adria Altea Eden. Make sure you’re happy with the height of the microwave, though. Consider your own way of getting around the inconvenient place for storing the rear table. In many, many ways, the well-priced Eden has brilliance in spades. 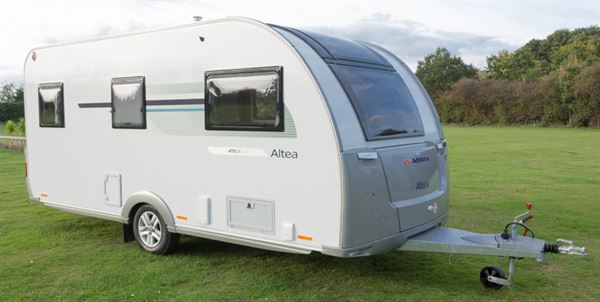 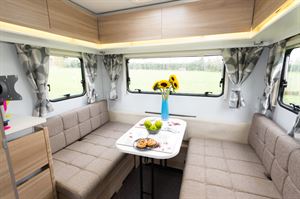 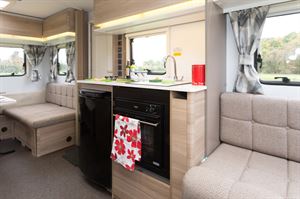 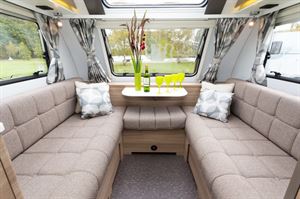 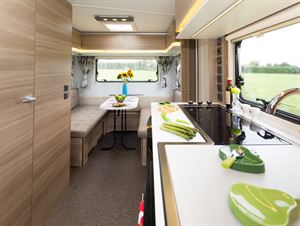 The new Adria Altea Eden is one of the lowest-priced five-berth caravans on the UK market, at £15,390, and it’s unique, having a higher spec than other Alteas

When Slovenian manufacturer Adria introduced a new model to its lightweight Altea range for 2016 it achieved two important things. The new model is Adria’s first twin-lounge five-berth layout. And it also brings a new level of spec to the Altea range. This model, the Eden, has more equipment, and a different appearance, than the other Alteas. That’s because it has been created as a special Silver Collection model, to celebrate Adria’s 50th year of manufacture.

This is a caravan of simple, plain, appealing style.

We love its pure white walls, its white locker bases, its pale cabinet doors and the use of plain, pale fawn panels on the fore end of the kitchen and on each end of the wardrobe-shower room unit. We also love the lines of light that define the under sides of each top locker; the LED strips cascade light down over silver panels recessed into the white lower frames of the lockers.

Lighting is a feature of the Eden in other areas, too. Three LED clusters sit over each lounge. And a strip of light runs the whole length of the kitchen.

The extra equipment that distinguishes the Silver Collection Eden from the other Alteas includes carpets, a microwave, a spare wheel, alloy wheels, a sink cover that can be used as a chopping board, and a drainer. And the Truma Ultraheat electric function is included; all other Alteas are heated only by gas.

The Eden has another feature that makes it different from the other Alteas. It shares the huge, high-arching sunroof feature with Adria Adora models; these sunroofs are just about the largest in any make of caravan, creating an almost conservatory feel in the front lounge.

The Eden’s look is ultra-modern. Its layout, though, is what you might call an old standard; a conventional, long-established design that was once so popular that every manufacturer offered at least one. That’s because it worked well. The twin-lounge idea fell out of favour, though, as bunks rose into fashion. Now, though, there’s a resurgence of the twin-lounge style. And the Eden’s advantage is that it is one of the lightest in weight of any five-berth option.

There is, though, one aspect of the Eden’s layout that won’t suit all families. It’s the shower.

Just like the twin-lounge layouts of yesteryear, the Eden’s shower shares space with the toilet. Amid today’s preference for separate showers, some potential buyers may consider the Eden lacking. But before you race down that line of thought, consider how much the Eden does achieve; beds for five in a modest caravan length and lots of floor space. There has to be length compromise somewhere. And it’s here in the shower room.

The toilet is bench-style. The intrusion of the wheel arch means the shower area at floor level is only 47cm x 40cm. Although this is most definitely a usable shower, it’s predictable that most buyers of this model will be families who prefer to use campsite showers anyway. There’s merit in that, quite apart from avoiding confined caravan shower space; there’s no water warm-up waiting time between everyone’s showers, so the whole family showering routine takes up less time.

A first glance at the Eden’s little room many have you thinking it has no washbasin. That’s the clever bit. The basin is integrated into the mirrored cabinet on the rear wall, above the toilet. It hinges down, in a reassuringly precise and robust way. And, totally unlike flimsy, flexing hinged basins of bygone-year caravans, this one has a proper plughole. This is a really good basin, measuring 46cm long and 36cm wide.

There’s only one towel bar, though; buyers will need to consider asking their dealer to fit more towel hanging provision.

The lounges transform into two double beds, with a bunk above the rear bed. Substantial wooden-frames slatted bases draw out from under the seating sections, to meet in the middle to form the bed bases. Upholstery turns over to make reasonably flat mattresses. We found it’s a quick and easy process.

The bunk base rises from the rear wall; its mattress is stored under one of the rear settees during the day.

We’re reviewing the prototype Eden; there will be a couple of changes for production models. One will be the depth of the upholstery in the rear section, which will be almost double the thickness of the seating you see here in our pictures, to create comfort matching that of the front lounge-bed.

Seven top lockers take care of small items. The wardrobe gives you 53cm of hanging width. Together, we think that’s workable for the clothing needs of five.

Shoes, though, could present a challenge because there is no base space under the wardrobe (the convector unit, the hub of the Truma blown air system, plus a large drawer, occupy this space). Some, but not all, of the shoe need of five, can be provided by the locker space under the seating unit at the centre-front of the fore-end lounge. Footwear will inevitably have to be allocated space along with bedding under the main seating areas. There’s no front access to these spaces but we reckon few buyers will mind lifting the settee tops to get at stuff inside. After all, you can’t expect everything in a caravan that costs an attractively low £15,390.

A caravan with two four-seater dining “rooms” gets our praise every time. The table for the lounge stores away in its own cabinet on the fore end of the kitchen. The rear table, though, stores under the rear offside settee, which means getting everything out of that space to remove and replace it. That’s not an easy task, given that you have to raise the substantially-constructed slatted bed base structure that forms the top of this locker. It’s most definitely a two-person task, we discovered during our review. That’s because one person has to hold up the wooden seat base while the other gets hold of the table, held in place by turn-clips, on the floor of the locker. There’s a way around the problem, though. If we bought an Eden we’d leave the rear table up all of the time and at night we’d put it in the car, or in an awning. (Given that more than 90% of caravanners buy awnings, it’s not too much of an issue.)

The Eden’s four small scatter cushions aren’t really enough to create lounging comfort, bearing in mind the settees don’t have armrests. If we bought an Eden, we’d also buy four big cushions, two for each lounge. That would also enable you to personalise your Altea. The subdued grey-cream-shaded curtains are made of nice quality fabric, and reflect light, adding to the light, bright image of both lounges.

The Eden’s kitchen is 1.28m long. When the neat, white cover is over the sink the amount of surface space is adequate for making meals for five.

Adria’s hobs are distinctive. They are three burners in a line, so they take up minimal space. And they are of three different sizes, suitable for differing pan sizes.

Among the added equipment which differentiates the Eden from its Altea stablemates is a microwave, mounted in the top locker. Its position will be considered too high by anyone who isn’t tall, though; lifting hot dishes out at this height would necessitate a lot of care even for cooks of tall stature.

The combined grill-oven, though, is well positioned, so is likely to be used far more than the microwave.

Alongside the microwave, a two-shelf cabinet takes care of small items. The locker forward of the kitchen, over the lounge, has fitments for mugs and plates. There’s a 30cm deep cabinet under the oven-grill. And, opposite, under the wardrobe, there’s a large cutlery drawer (36cm wide) with an additional shallow drawer beneath it. In total, the Eden’s kitchen space is by no means enormous, but, as with the shower arrangements, you have to keep in mind the context; the Eden’s main attribute is its ability to sleep five in a very lightweight and affordable caravan.

Talking of light weight… Our one-size-fits-all SsangYong Rexton tow vehicle is well oversized for the Eden; this is a caravan well within tow capability of medium-sized cars. That said, the Eden bobbed along nicely, along dual carriageway (the A1) and amid the winding lanes of Lincolnshire, although there was a noticeable amount of bounce on uneven surfaces, a characteristic we’ve notice before in Adrias.