Awesomely stylish, in a stark manner, the Loire is a two-berth caravan like no other. We love the wardrobe design and the kitchen is amazing. Only the slightly awkward four-handed task of getting duvets in and out from under the settees mars the storage arrangements. Just remember to budget for an extra TV point for the lounge, and definitely go for the £650 pack that gives you a carpet, additional lighting, plus the Venture Pack; that gets you an aerial, CD radio and microwave, at £399. 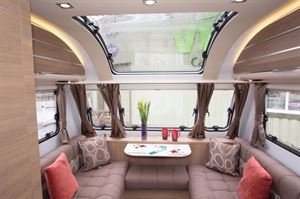 The Adria Adora Loire is Britain’s only two-berth caravan on an AL-KO Delta axle. It is also the only two-berth to have an in-line triple-burner hob. It has a polyester body shell (which increases resistance to dents). And it has an enormous roof light that arches high into the lounge ceiling.

The Adria Adora Loire is the only two-berth in the Adria’s British portfolio. Which makes it a pretty remarkable caravan. Its layout places it alongside a number of end-shower room two-berths available in Britain. So how well does it stand out from the crowd? We had a day to find out. We’d planned to hitch up the Loire at Venture Caravans’ Daventry branch and tow it just a few miles to a small, secluded caravan park. But rain-soaked ground stopped campsite play and we had to be content to stay on terra firma, on Venture’s premises. Which is why you see buildings in our pictures, through the windows, instead of grass and trees!

Time to set about examining the details.

First: the axle. Delta is AL-KO’s name for its cranked axle, designed specifically for longer single axle caravans such as those higher up the Adora range in length terms.

The cranked, rather than straight, shape means that, on cornering, the outside wheel resists the centrifugal force created by the weight being shifted as the caravan rounds a corner. By comparison with a straight AL-KO axle, the cranked Delta axle changes the position and angle at which the tyre touches the ground.

Apart from the axle, the Loire’s equipment is familiar to most caravan buyers. Heating and water systems are made by Truma. Adoras have the Truma Ultrastore hot water heater, operational on gas and electricity. The space heating system is the Truma 3004 heater, with hot air distributed through ducting to outlets around the Loire. You can use it on either gas or mains power.

The cooker and fridge are made by Thetford.

In standard form, Adoras don’t come with spare wheels. Our test example, though, in common with all Adoras at Venture Caravans, was equipped with a spare wheel. It also had alloy wheels, with an AL-KO Secure Wheel Lock receiver, a wheel arch insert (to exclude draughts when you put up an awning), a carpet, lighting around the roof lockers and a drainer to attach to the sink. Those items constitute the Adora Pack, which amounts in value to £650.

Four of the five Adora models have virtually identical full-width end shower rooms, and the Loire is one of them…

The shower is on the offside, virtually square, and with a mirror on the rear wall, set forward of the wall, with concealed lighting behind it. An identical mirror is on the rear wall to the left of the washbasin-cabinet suite, which also features a mirror, this time much larger. An array of small shelves is hidden behind doors running the depth of this central large mirror. The basin looks more like a fruit bowl than a piece of bathroom equipment. It's awesomely stylish, with a big disc in the centre that is in fact the plug. You push it downwards to activate a spring which opens the aperture beneath it to let the water out.

In common with the other Adoras, the Loire has something that’s a rarity in caravans: a mains socket in the shower room, alongside the large mirror, in the perfect position for hairdryer use.

There’s a towel bar on the rear wall. But this is the Loire’s only towel provision, and it’s set too near to the wall to enable you to loop a large shower-size towel over it, although it's perfect for a small towel. An additional towel loop or rail would have made a big difference to practicality; if we were buying a Loire, we’d be asking for one…

The Loire’s sleeping arrangement is straightforward. It’s a double bed making up by drawing out base sections from each of the settees to meet in the centre of the caravan. These sections are slatted, an on a wooden frame; very substantially constructed, in-keeping with everything you find in all Adrias. Having got the base in position, you compose the mattress from the upholstery. The backrests drop down flat and go in the centre and, to get the mattress as flat as possible, you turn over the seat base sections so that the knee rolls go on the outside edges.

Because the seating is wrap-around, there’s a centre section of upholstery that’s not needed for the bed. Finding somewhere to put it at night isn’t a problem, though, because the wardrobe is so deep that there’s almost bound to be space in here along with your clothes.

Storage in the Loire is exceptionally generous. The wardrobe has plenty of hanging depth as well as width. And alongside it, within the same unit, there’s a seven-shelf cabinet. That will take care of all your shoes and fold-up clothes needs in just the one unit; no need for garments to invade the top lockers that line the lounge.

And there’s more. To the left of the wardrobe, alongside the entrance door, a cabinet gives you three more (much smaller) shelf spaces.

Bedding storage space is ample for the duvet and pillow needs for two, even though part of the offside base locker space is inevitably occupied by the water heater and battery compartment.

Getting into these under-seat areas necessitates raising solid wooden bases; the double bed base construction doesn’t allow for drop-down doors. Raising them, and stuffing bedding in, is a four-handed job; two hands to hold up the top and two more to put the stuff in. But don’t be put off by this; we think it’s something we would soon get used to if we were Loire owners.

The dining table lives in the narrow shelved cabinet, alongside the door. Bizarrely, this is where the TV connection points are. There’s ample room for a television, but it would be facing the wall of the shower room. Again, if we were buying a Loire, we’d be asking for an extra aerial and mains socket to the fitted in the lounge, so that we could put our television
on the deep window ledge or on the hinge-up coffee table. Venture Caravans told us they would put in this socket for £75. Adoras don’t come with aerials as standard; Venture has an answer for this, too; an aerial is part of a package of extras including a microwave.

The upholstery is dense foam, rather than sprung. If you're used to buying caravans with sprung seating, an important fact to bear in mind is that this seating is really comfortable, as we discovered during our test day, and also as we are learning as we use our long-term-test Adora Isonzo, also provided through Venture Caravans.

Although the Loire’s settees aren’t long enough to lie down on, they are plenty long enough for feet-up reclining, using the scatter cushions to support your shoulders in the corners. Adoras come with four scatter cushions; we imported two more to enhance comfort while we were assessing the lounge and we’d do the same if a Loire were coming home with us.

The Loire has a kitchen several centimetres longer than bigger Adora models. The advantage comes in the form of a longer surface and also more storage accommodation. The pull-out triple-drawer unit on the fore end of the kitchen is twice the width of those in other Adoras.

All Adora models have triple-burner in-line hobs. This design sets them apart from all other caravan on the British market. The burners are of different sizes, to suit pans of different sizes. It’s an arrangement that we can say works well, drawing on the experience of using the Isonzo in which, to date, we’ve cooked a couple of dozen dinners of fairly adventurous nature.

Kitchen storage in the Loire is every caravan buyer’s dream in terms of quantity of space. The culinary equipment needs of two people would never fill the two enormous drawers and drop-down-door cabinet below, plus the top cabinet that runs the full length of the kitchen, and not forgetting those three drawers in the pull-out section we mentioned earlier.

Another kitchen feature that sets Adoras apart from the pack is the position of the oven and grill. It's above the fridge, to the rear of the kitchen, which makes the grill on perfect eye-height for buyers of average stature. And, again referring to the experience we’ve gained using the Isonzo, with the same configuration, we can vouch for the high position of the oven being practical. Getting items in and out is far easier than with an oven positioned lower, we have discovered.

A quick spin around some roundabouts and a section of the A5 (on which Venture is sited) demonstrated that the Loire is simply an easy tow, helped, of course, by the long drawbar, a configuration that always enhances stability.

* Find out about our great Caravan magazine digital subscription offers by clicking here.

* New to caravanning and want a wealth of advice on buying, owning and enjoying your caravan? Order your digital copy of Your First Caravan here.