The pale cabinetry, practical grey carpet, cool grey curtains and cushions create a fresh, modern environment. The kitchen’s shape and storage capacity is impressive. The long settees are comfortable. And bed-making is easy thanks to the lightweight seating units. And the large shower room is a delight. All in all, the 462, together with its same-layout siblings in the Compass ranges, brings a new dimension to the tourers-for-two market. 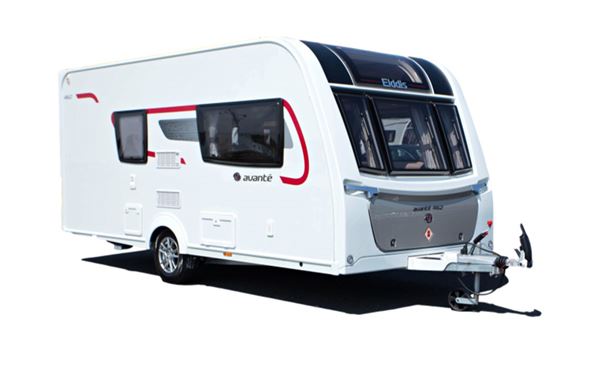 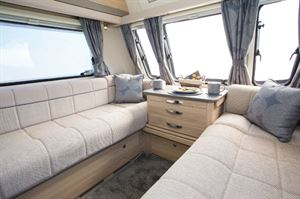 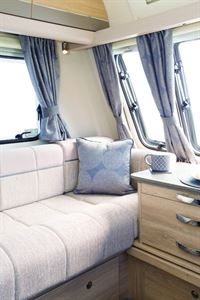 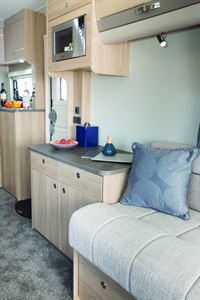 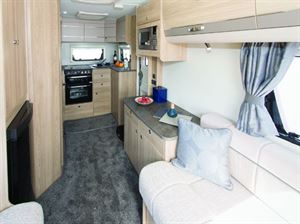 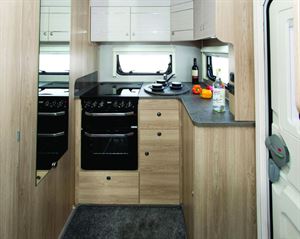 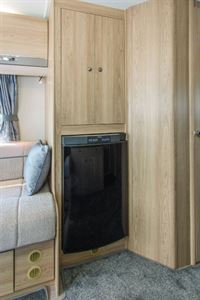 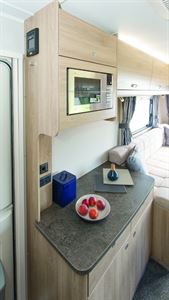 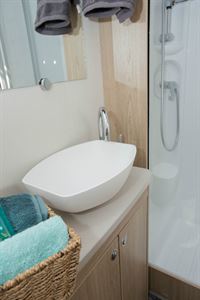 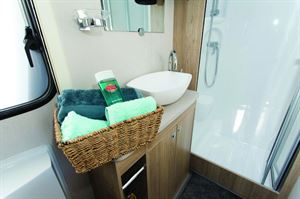 A two-berth, only 4.6m long, with a separate shower, an L-shaped kitchen, loads of storage space, 1.9m-long settees. Too good to be true? Read on…

Two-berth caravans have taken something of a back seat in recent years. Small, lightweight fixed-bed options have grabbed the limelight – and the sales.

One caravan manufacturer has turned its attention to the two-berth sector with five new models for 2018. Four of them are in the Elddis and Compass ranges, all called 462. And there’s a shorter, lighter one, in the Xplore range, the 422 (which we reviewed in our September issue).

The Elddis and Compass ranges before offered two-berth models. All models have with full-width shower rooms and offside kitchens. And, the layouts are different from the new two-berths.

These were the Compass Capiro 482, and in the Elddis range, the Affinity 482 and the Avanté 482. The manufacturer realised the need for a shorter two-berth for buyers who want to store a caravan in a restricted space, such as in a garden. Hence the launch of this new generation of tourers for two.

The Avanté 462 is 5kg lighter than the 482 and 12cm shorter. All the new 462s are the same layout; we picked the Avanté version for this review.

The layout is a clever amalgam of the traditional end-kitchen two-berth design we’ve known for generations. And the much ‘now’ need for a separate, step-in shower. The result is an L-shaped kitchen with a shower room alongside it, a central area with a large dresser and, opposite, a wardrobe with the fridge beneath it.

Heating comes from the Whale Expanse unit. It is under the floor so it doesn’t impinge on storage space Water heating. This is also Whale system that’s under the offside settee. Spec includes five mains sockets and a wide over-window sunroof.

It’s the Tardis-like ‘small room’ that will intrigue you the most about this newcomer.

Picture the little washrooms at one time an inescapable feature of every end kitchen two-berth. With the toilet, shower and basin all crammed into one space with only a curtain to stop some shower water from drenching the entire compartment. And the resultant need to mop out the whole ‘room’ after every shower. The 462’s shower room is a world away from that.

It’s much bigger than you’d imagine in a two-berth caravan. It has a body length of only 4.64m; it’s 2.14m long, almost as long as a shower room running across the full width of a caravan. And it’s 80cm wide; again comparable with rear shower rooms.

The shower cubicle is 63cm x 80cm, with a sturdy bi-fold door which runs on tracks at both the top and the bottom. There’s a soap dish attached to the riser bar and a small space alongside the control to put shampoo and shower gel.

And there’s a towel loop mounted high up on the wall, in the perfect position as you step out. Most buyers would want another towel hook or loop; that’s an easy addition, though.

The basin is in the centre, sitting up in modern style on top of a cabinet, which incorporates a toilet roll holder into shelving. Good hideaway accommodation is here also in a wall cabinet.

Two single beds that are 1.95m long or a massive double, 2.1m long; the choice is yours. Either way, this is a caravan designed for tall buyers. The webbing-linked slats, which you draw out from beneath the two-drawer unit, complete the double bed base.

Upholstery is Ozio, composed of layers of fibres arranged in a sandwich construction. It’s designed to keep you warm in winter and cool in summer. The layer of fibres that retains warmth, and prevents temperature build-up, is on the underside. To get the best comfort from your mattress, you turn all the pieces over when you make the bed.

Remember struggling with heavy sprung seating to turn them over? Ozio upholstery is about half of the weight of sprung seating, so the whole bed-making process is easy – and quick.

Access to the under-seating storage areas is easy, too, via full-length, hinge-down hatches or by raising the tops. They are are self-supporting on spring hinges. The lightweight upholstery contributes to this ease, too.

There’s a small hideaway under the drawers, too, and four big top lockers. The nearside ones are 83cm long and the offside ones are 64cm long. All four are 44cm high and 25cm deep; these will hide more than enough fold-up clothing.

The 81cm x 65cm pull-put table above the front drawers is large enough for two-person dining, unless you’re planning an elaborate meal.

The table lives on brackets on the aft wall of the wardrobe. It’s light to lift, easy to slide in and out. And, along with the kitchen and dresser surfaces, the table is attractive. It has a matt rock-effect pattern sparkly bits that catch sunlight.

If you’re in the habit of using a table cloth (great for catching crumbs if you’re eating French breadsticks!) you may think twice, because the table surface is so attractive.

The 1.9m length of the 462’s settees ensures lie-back relaxing comfort is a given. It also means that, when guests are joining you, there is enough space for six to sit in comfort. The predominant Avanté colour for 2018 is grey; on-trend and appealing.

The subtle roundel design in the curtains and cushions gleams in the sunshine. Teamed with hessian-weave-inspired cream seating, it looks great.

And there’s something practical about the new Avantés. The carpet is also grey. If your guests don’t take their shoes off at the door, and you feel embarrassed broaching the subject, this carpet should withstand it.

Many components create the 462’s lounge lighting design. There are four corner spotlights, plus three bright, tiny lights set into the ceiling close to the sunroof. It has white concealed lighting above the lockers and a strip of light set flush within the woodwork running across the top of the window.

If the shower room is a surprise in such a compact caravan, the kitchen is an even bigger surprise, both in surface size and storage capability. Two drawers and a two-shelf cabinet, 34cm wide, face the front of the caravan. And a cabinet that’s 1.09m long and 32cm wide stretches along the nearside of the kitchen.

Plus, there’s a small cupboard for pans under the oven. Top cabinets (finished in lovely cool, fawn) line the rear and side walls. The designer angled them at the corner to make the best use of space. This corner section measures a staggering 51cm at its deepest point.

That, in total, is more storage space than you’ll need. And ensures you can keep stuff neat and organised.

And there’s more – much more. The 462 has a large dresser, a metre in length (that’s plenty of extra work surface); it contains two drawers and a two-shelf cabinet. Two of the five mains sockets are here (along with TV points); two more are in the kitchen itself. No jostling for space for a kettle and toaster here!

Cooking appliances are a full oven and grill. Three burners and a hot plate, plus a microwave at an height ideal for most statures, above the dresser.

The 462’s kitchen is nothing short of brilliant. That's especially considering the compact length of the caravan, hence we’re giving it one of our rare A-star ratings.

It’s great to see Avantés equipped with the automatic, electronic ATC stability control system. That goes for the Affinity and Capiro versions of this layout, too. And, at a mere 1249kg MTPLM, the Avanté 462 is suitable for a great many towcars.

For the record, the Compass Casita 462 is the same weight as the Avanté version, at 1249kg MTPLM. The Compass Capiro 462 and Elddis Affinity 462 are both is 1299kg MTPLM.

The pale cabinetry, practical grey carpet, cool grey curtains and cushions create a fresh, modern environment. The kitchen’s shape and storage capacity is impressive. The long settees are comfortable. And bed-making is easy thanks to the lightweight seating units.

And the large shower room is a delight. All in all, the 462, together with its same-layout siblings in the Compass ranges, brings a new dimension to the tourers-for-two market.