Tens of thousands of people attracted to NEC show 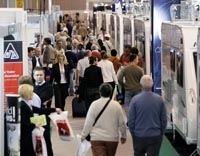 The show covered five halls at the NEC in Birmingham and featured new motorhomes and caravans as well as a wide range of accessories.

Show Director Sam North said: “This year’s event exceeded our expectations. With over 69,000 visitors coming to the show with the intention of buying a caravan or motorhome we really wanted to ensure that the show was bigger and better than last year’s award-winning event.”

Organisers say next year’s exhibition will be even bigger with more to see and do.

•    Full show coverage on new motorhomes will feature in the December issue of Which Motorcaravan, on sale 8 November.

Caravan coverage will be included in the December issue of Which Caravan, on sale Thursday (1 November).