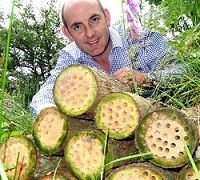 The decline of bee populations has become a hot topic recently, with much debate about the causes and possible cures for the collapse of honey bee colonies and concern raised about populations of other pollinating insects.

Now a Cumbrian campsite has taken the initiative to help one species of bee, by providing thousands of homes for them to shelter during the winter.
The solitary bee does not congregate in hives but, as its name suggests, lives a more solo existence. The species is thought to be under major threat, partly because of recent hard winters.
The imaginative project at Skelwith Fold caravan park in Ambleside has hundreds of hardwood logs turned into winter lodgings for solitary bees by having holes drilled into them.
Park owner Henry Wild hopes the site’s 130 acres will now become a safe haven where these harmless, non-aggressive insects can be helped to re-build their population. The 7000 tunnels enable the bees to make cells of nests for their larvae.
He suggested that Skelwith Fold had three specific factors to favour it as a 'honeypot' destination for the insects: “We have a great diversity of wild flowers which produce an abundance of nectar and pollen, and we also have an ancient tarn which provides mud to wall-up the cells in which the bees leave eggs and food. Perhaps most significantly, Skelwith is a no-go zone for pesticides and insecticides”.