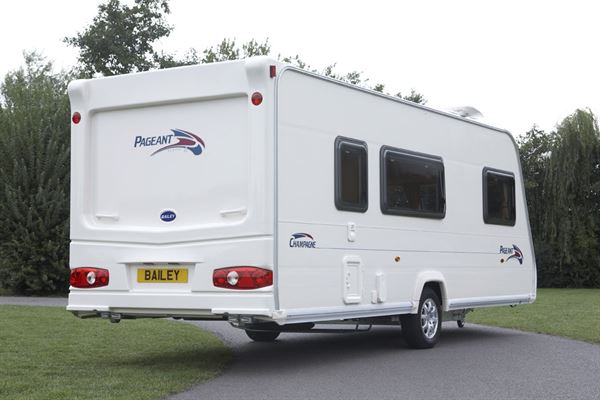 Bailey has taken the wraps off its new Pageant Series 6 - the mainstay of its four-model line-up.

This popular range has been going for more than 20 years, and has won a host of awards, including Tourer of the Year in 2005. In fact a Pageant champagne is the model of choice for foreign secretary Margaret Beckett. But the new Series 6 range has a hard act to follow. So how does it measure up?

Instead of gambling with new layouts, Bailey has opted to stick with six proven layouts from two to six berths. The Monarch and Champagne models feature a contemporary new bathroom design with the latest style shower cubicle and walk-in wardrobe. While the Bordeaux, with its fixed rear double, is now lighter and shorter in length to appeal to a wider audience and a bigger range of tow cars.

Inside, the soft furnishings have seen an update with two options to choose from - the standard 'Epsom' with coordinating lined curtains, bolster and scatter cushions or the alternative 'Chepstow', available as a cost option.

Equipment specification also gets a boost with the addition of a dual action fan mounted in the clear roof light, a new Remi Top tilting panoramic sunroof and new housing and speakers for your sound system.  In the kitchen you'll notice a new Dometic 117-litre fridge freezer, a Spinflo recessed sink with clip-on draining board and a new microwave locker - though the microwave, of course, costs extra.

Weights are yet to be confirmed, but are expected to be pretty much the same as last year, with the exception of the more compact Bordeaux, which will see a reduction in weight. Broadly based on the Ranger 464, this is a compact 6-berth set to have a bigger fan base now it can be towed with a smaller car.

Bailey's Rachel May reckons the new Pageants make the perfect rally caravan:
"The pageant is probably the most important 'van in our range, and we have lots of traditional customers who like to use them for rallies.

"We've tried to provide them with a really good specification so that when they do go to rallies in the middle of a field they've got everything there that they need. There are also several cost options to choose from if they need to.' She said.

Bailey is reluctant to release any price details before the official launch at the NEC show in mid October, but prices are expected to rise by around 2.5 per cent, so you can expect to pay around £12,115 for the four berth champagne and six berth Bordeaux, while the five berth Provence could be yours for around £12,299.


Where can I see it?