New Caravans and Accessories at Dusseldorf 2017 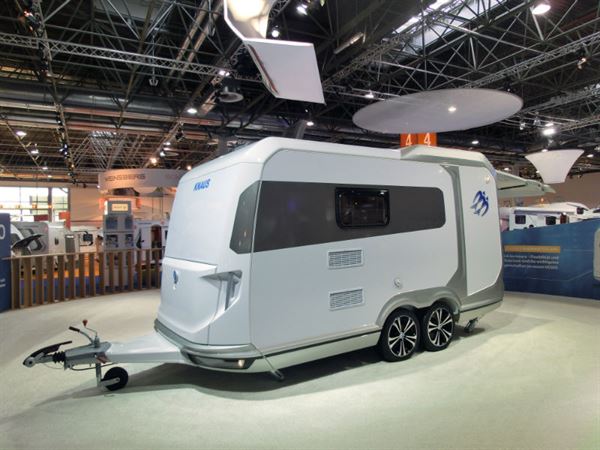 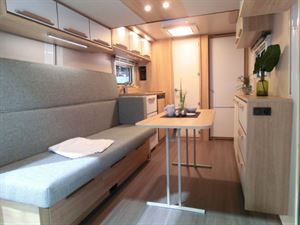 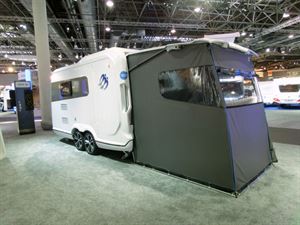 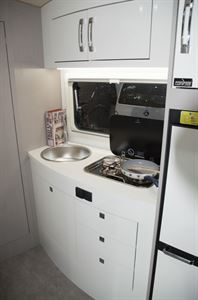 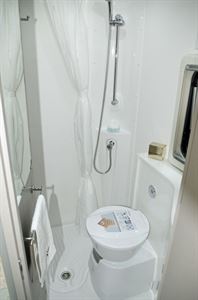 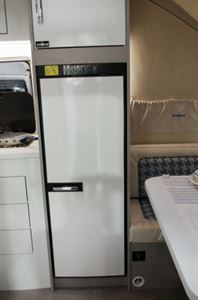 A compact monocoque caravan from Italy, a German tourer made for heavy loads and a lithium battery from Holland

Words and pictures by Terry Owen

The GRP monocoque design distinguishes the Wingamm caravans. It gives the caravans a rounded and smooth look, whilst combining good strength with light weight. And they give excellent weather resistance. They've yet to catch on in the UK but this latest model might do the trick. 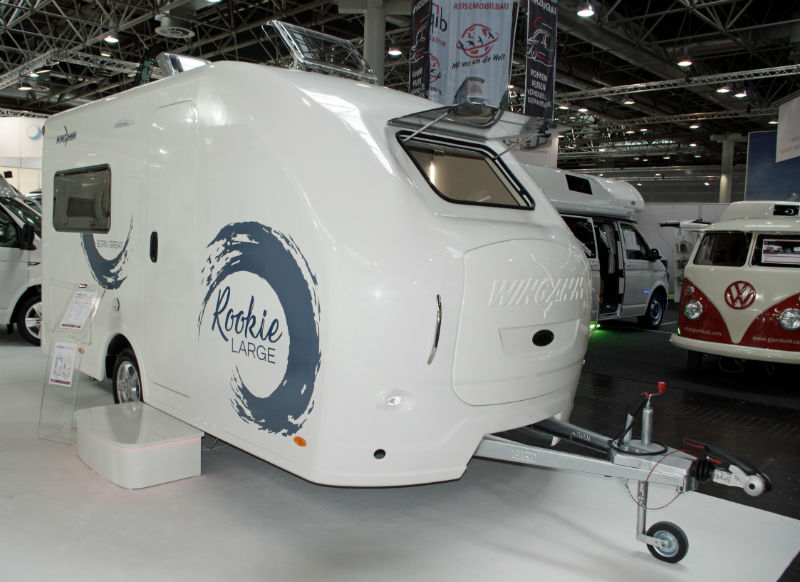 Following customer feedback on the previous model, Wingamm revamped the interior of the Rookie Large. They've upgraded the washroom to incorporate a shower. And a Dometic toilet and the kitchen has the option of a 146 litre Dometic fridge freezer. This featured in the display model.

And we have to say it definitely increases the appeal of the caravan but costs an extra £1788). Part of the cost is due to the fact that a blown air arrangement replaces the Truma gas heater.

A 70-litre on board heated tank compliments the water system. There's an option of a similar sized grey water tank if needed. The only downside is that, like many continental caravans, you have to fill it yourself. There is no socket for a submersible pump. 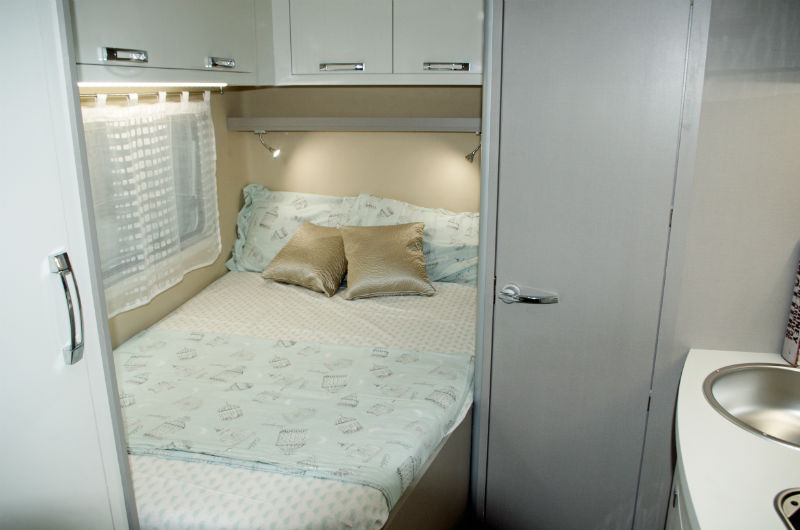 Sleeping comes in the form of a fixed double bed and a second double bed that you can make up the in the lounge. This is very much like the previous model and is best described as 'cosy'. One reason is that the curved bodyshell limits the window area, making it a bit dark.

There is no awning rail as such but you can fit a three metre wind-out Fiamma awning.

The new Wingamm is a stylish caravan that will turn heads wherever you go. It packs a lot into its diminutive size whilst offering an excellent 250kg payload. This is much higher than many other caravans. But, there is an extensive list of options, including a spare wheel, which can eat into the payload.

The standard model has a 1200kg maximum weight. This means that you can tow it with a small car, such as a Ford Focus or Vauxhall Astra. Or even some variants of the new shape Volkswagen Beetle.

UK prices start at £24,500 plus £1500 delivery from Italy. UK importer Aston Leisure hopes to have an example on display at the NEC show this October. 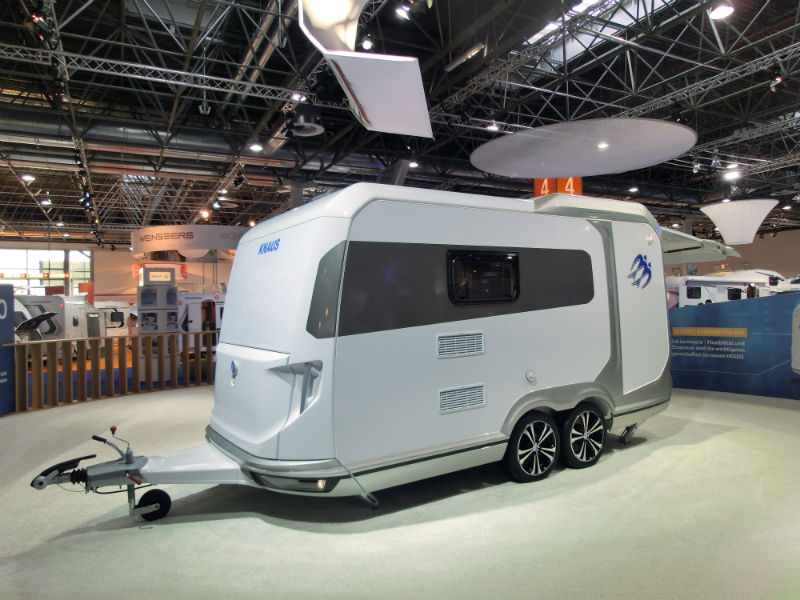 The Deseo is a small caravan for outdoor lovers who need to transport heavy and bulky items, such as motorbikes. It's been around for some years now and during that time has gone through several incarnations. 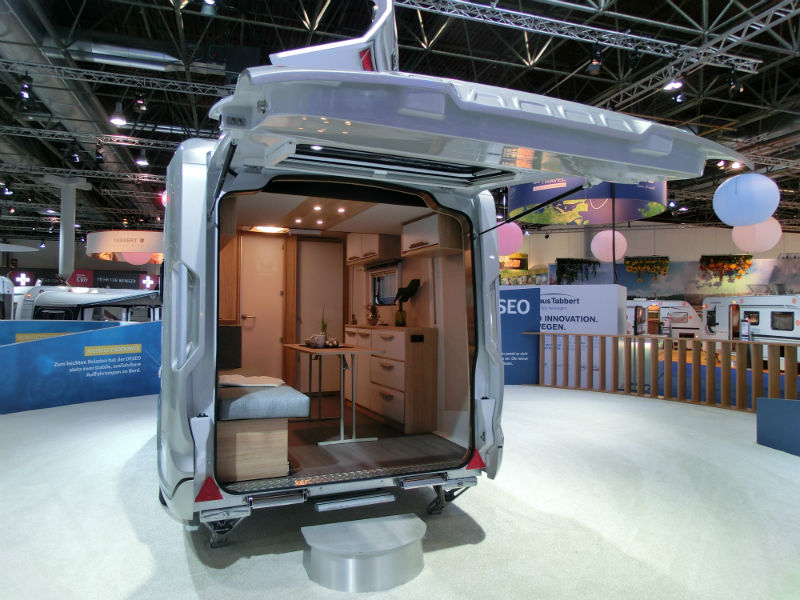 For 2018 the Deseo has been completely revamped. The bodyshell is now based on Knaus' super light FibreFrame technology. This caused a stir when it first appeared in the Travelino last year.

Knaus says the new Deseo is the first caravan of this type with columns designated as A, B and C to provide strength for supporting heavy loads.

For example, the B column carries the lifting bed and the C column the garage door. You illuminate the columns at night to stress the design.

The greatest weight (MTPLM) is up from 1350kg to 1500kg for the standard model. There is also the option of a factory upgrade to 1800kg which adds 25kg to the unladen weight.

Knaus had yet to announce the mass in running order (MIRO) figure so we can’t be certain of what the largest load will be. All we can say is that it's likely to be up on the 2017 Deseo’s figure of 480kg. This means it should be more than enough for two motor bikes or even a high-powered quad bike.

The interior has a completely new and more space-efficient layout. The load area is now completely rectangular rather than having a corner cut off by the washroom as before.

The kitchen has moved from the front end to the side. The bench seat moves from the right side to the left. You now have the ability to make it into an easy pull-out double bed, complementing the drop-down bed above it. The right side now houses a slim sideboard that incorporates a pop-up stand for a TV.

Retained is the large, single piece, tailgate. And, you can use it in conjunction with a rear tent to expand the living area. A pair of pull-out loading ramps completes the picture. Knaus achieved all this whilst keeping the body length (including the 'A' frame) below six metres.

Whilst the previous model was a transporter with somewhere to sleep, the new one offers a little more style and comfort. It's designed to do a job and it succeeds, indeed there's nothing else quite like it. 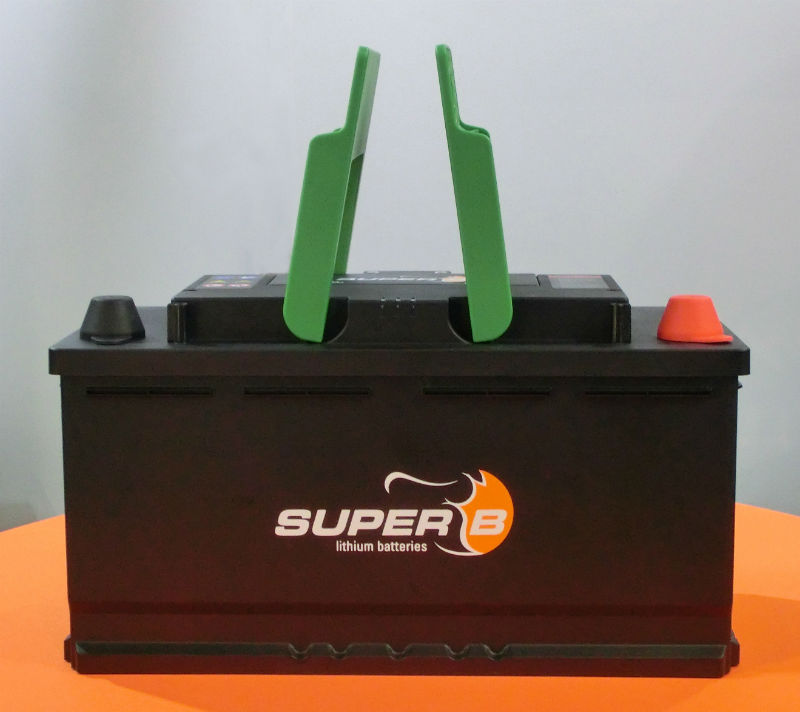 Lithium batteries power our tablets, smartphones, cordless appliances and many other devices. Over the last few years they've been making inroads to the caravan and motorhome market. But cost and limited availability have held them back.

Things are changing.  And the introduction of a 12-volt, 90-amp hour leisure battery from Dutch manufacturer Super B, unveiled at Salon, is a case in point. The company develops and produces advanced lithium batteries for a wide variety of applications.

The manufacturer designed them to be a drop-in replacement for lead acid batteries. Each one comes complete with an inbuilt electronic battery management system.

They designed it to protect the battery from damage through excessive current or over discharging and charging. It also ensures a balanced, even charge. This can be a problem with lithium batteries. A bus interface and Bluetooth connectivity allow for remote monitoring.

Made in the Netherlands, the battery cells use Lithium Iron Phosphate. Experts regard it as the safest and most reliable of the lithium technologies. 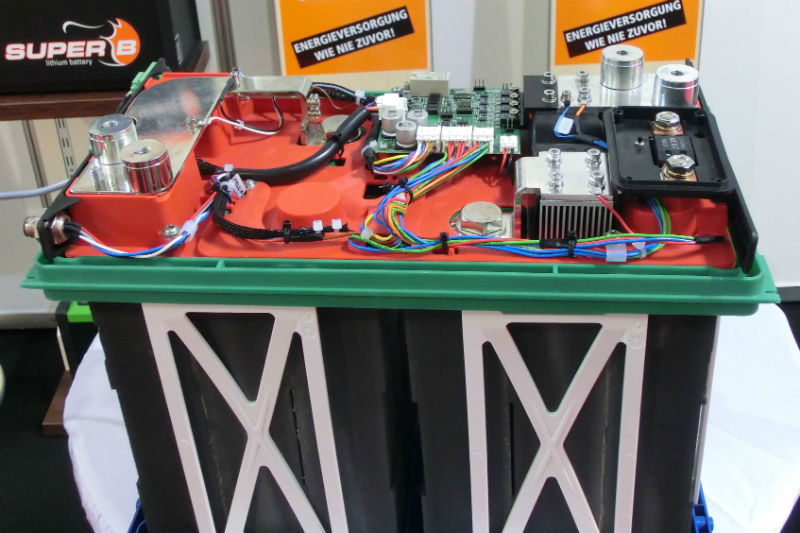 Unlike lead acid batteries, the makers claim these lithium batteries you can cycle (charged and discharged) up to 5,000 times. This compares to about 300 times for a good quality, flooded lead acid battery.

Also, the self-discharge rate of Super B batteries is 10% per year. Compare that to about 9% per month for a flooded lead acid battery. Add to this a weight of up to 80% less than equal lead acid batteries, together with a smaller volume, and the advantages stack up.

It's not surprising that this kind of performance comes at a price which, in the case of this 90 amp hour battery, is £1900. On the basis of 5000 cycles this works out at 38 pence per cycle.

It's a figure that is like that of a good quality flooded lead acid battery. But you get greater reliability and more power between charges. The bottom line is that, for serious off-gridders, lithium batteries can make a lot of sense.

At the time of writing the manufacturer was close to appointing a UK leisure batteries dealer.

For more information contact the manufacturers at [email protected]. 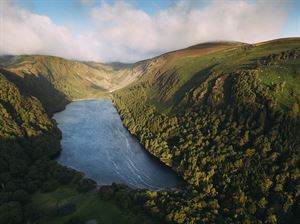 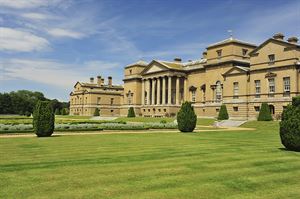 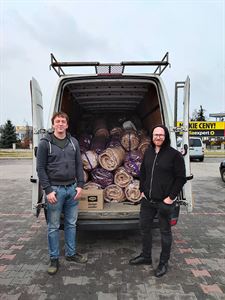 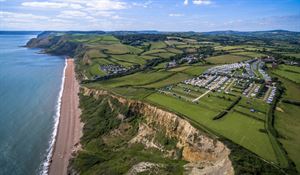 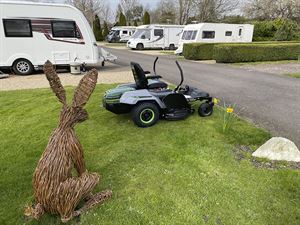 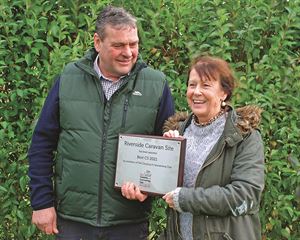 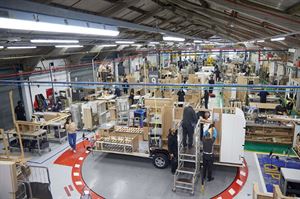 What goes into a caravan or motorhome?

Go behind the scenes with Bailey, on a two-week tour of some of its key motorhome and caravan component ...