Honda Yuasa Racing teams up with Bailey Caravans at the BTCC 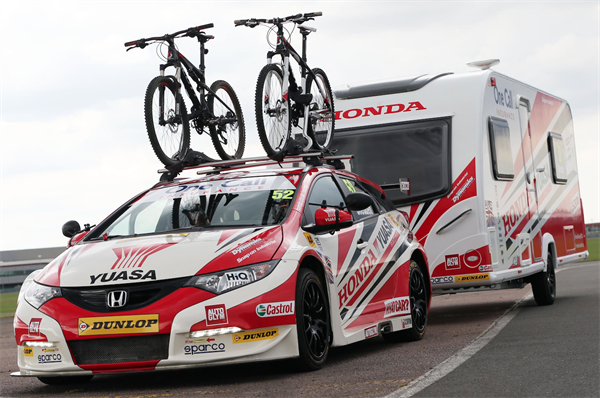 
During the Dunlop MSA British Touring Car Championship summer break, team mates Gordon Shedden and Matt Neal took to the road in their Civic Tourer replica race car, only this time they were towing a caravan too.

The two speed freaks set off in a race-liveried Bailey Pursuit 550-4, stopping on the way to Snetterton only for picnics, barbecues, and to take to two wheels on their mountain bikes.

Describing his on-the-road experience with team mate Neal, Gordon Shedden said: "I'll tell you one thing – Matt's map-reading is atrocious! For somebody who's been racing at Snetterton since 1800-and-something, you'd think he'd know his way here by now!"

Matt countered by saying: "Listen, when you've been around for as long as I have, you tend to nod off when you're in the driving seat. If I had the wheel, we'd be here a lot quicker!

"Anyway, beyond all the squabbles, it's been a great trip. Bailey has done a superb job with this because it's a mega-comfortable caravan, and our friendship is still just about intact.

"We're both feeling relaxed, refreshed and ready to race again. Bring it on!"