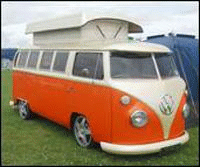 The Gloucestershire Steam & Vintage Extravaganza, now in its 37th year, has moved to a larger venue at South Cerney Airfield, Cirencester, for 2011.

From August 5-7, the show will attract more than 15,000 visitors and raise money for local and national charities.

Originally conceived for steam enthusiasts, the range of exhibits has grown year on year and now boasts a huge array of vintage transport, from commercial vehicles to classic cars, vintage motorhomes and caravans.

Rob Carthew, director of the classic caravan section of Gloucestershire Steam & Vintage Extravaganza said: "Caravans form part of our social history. They were originally used by travellers and entertainers before the war. It's fascinating to see how they have evolved into modern caravans, which provide an affordable holiday for many people."

For more information and to book tickets, click here.