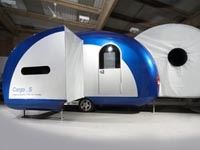 The event was hosted by the Duke of Edinburgh, who has been patron of the club since 1952.

Three caravans were pitched in the palace’s quadrangle – one of which belongs to the Princess Royal.

It was originally given to Princess Anne and Prince Charles when they were children but was later refurbished for the club’s 75th anniversary and re-presented to Princess Anne.

The other two on display were the Wanderer, the first leisure touring caravan from the 1880s, and a Cargo S, a hi-tech bubble-shaped prototype with a modern interior designed to show the caravan of the future.

* Did you attend the garden party? If so, share your experience with others in our forums section. Click here.