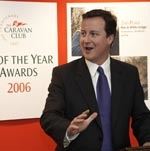 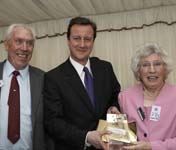 CONSERVATIVE Party Leader David Cameron has highlighted caravanning as a green, sustainable and family-friendly way of holidaying in the UK.

Speaking at the Caravan Club’s Certificated Location of the Year Awards at Westminster, Mr Cameron focused on the freedom afforded by a caravan and the environmental sustainability of this family-friendly form of holidaying.

The leader of the opposition said: “What could be more family-friendly than packing up the family into a caravan and enjoying a holiday together and what could be more green than holidaying in the UK and visiting the British countryside in a really sustainable way?”

Although he confessed to uttering the occasional expletive whilst ‘stuck’ behind a caravan on the A303, Mr Cameron told guests how much he had enjoyed a motorhome holiday in Wales in his youth.

This year’s CL of the Year Award winners all came from East Anglia: 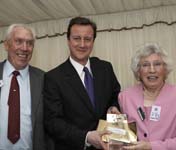 Responding to Mr Cameron’s speech, Caravan Club chairman Bob Black described caravanning as the ‘epitome of sustainable tourism’  and also laid claim to the Club’s involvement in providing accommodation for the London Olympic Games in 2012, when the Conservatives under Mr Cameron could potentially be back in Government.

“Our Crystal Palace site is actually where the Festival of Britain took place in 1951 and we do have extensive previous experience of managing temporary sites to provide accommodation for large scale events such as this,” said Mr Black