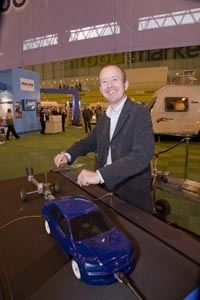 Based on the Bailey stand at the NEC show this month, the University of Bath lecturer demonstrated, using the sort of running treadmill found in a fitness club, a model car and a trailer with moveable weights, how, as long as the bulk of the caravan’s payload is distributed over the axle, the outfit remains stable at speeds in excess of 60mph – even when subject to quite powerful lateral forces (i.e. an overtaking HGV or a sudden lane-change manoeuvre).

But when the payload is repositioned at the rear of the caravan, the outfit becomes ‘twitchy’ at much lower speeds, while at higher speeds, even a relatively modest lateral movement can trigger a pendulum effect which ends in a catastrophic ‘snake’.

Dr Darling said: "If you need to stow heavy objects like a big awning or a couple of cases of wine, then the place to put them is directly over the caravan’s axle."