A Cornish festival with a difference 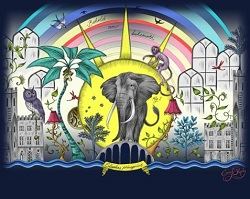 After an absence of a year, the Port Eliot Festival returns for 2014 with a line-up described as artists, performers, writers and thinkers who “run the gamut from endearingly pseudish to singularly brilliant”.

In less pretentious language, that means that this is not your typical pop music festival nor your average literary festival, but a bit of both and a few other things as well.

Held 24-27 July 2014 in the grounds of the stately home Port Eliot, near Saltash in Cornwall, the event includes fashion, food, and even a bit of terribly-posh village fete (there is a jam making competition in which the winning entry will be sold at Fortnum & Mason).

A sort-of reincarnation of the ‘legendary’ (their words) 1980s Elephant Fayre music festival, this is now a family-friendly weekend with more emphasis on good living than banging tunes.

Headline name on the main stage this year is Public Service Broadcasting, an act which doesn’t seem to be in the same category as past headliners such as Noah and the Whale or Jarvis Cocker.

On the literary side, there are a few big-hitters this year including Shami Chakrabarti and Rosie Boycott.

If this festival lacks anything in terms of top performers, it makes up for it in the range and variety of activities. You can go wild swimming at dawn or kayak on the river, go foraging or flower arranging, learn screen printing. There are several performance venues and dozens of performers, which means most people will find something to enjoy.

Camping is available on site with tent camping included in the weekend admission price, while motorhomes and caravans are charged £50. For some serious luxury there are various glamping opportunities available including yurts, tipis, bell tents, and Airstream caravans (the cost for one of these for the weekend starting at an impressive £2000). Adult weekend tickets are £172.50 and 2+3 family tickets £455. Individual day tickets are also available.