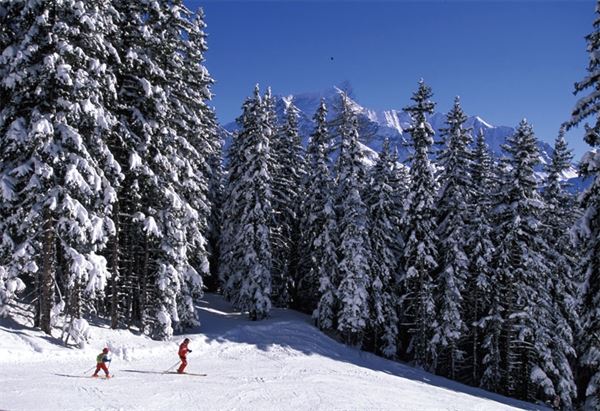 PICTURE yourself in a world of white. A world of silky snow, of crystals hanging in the air. A world where the sun blazes from a sky so deeply blue you could drown in it.

What would you do in this world? Would you slide through it on skis, using rhythm and gravity to move down, down the mountain? Would you rip through it on a snowboard, popping off cliffs, landing in a creamy snow shower? Would you turn your back on mechanised lifts and glide silently between the trees on long, lean cross-country skis? Or would you head for the powder, ski or board on your shoulders, hiking to reach that untracked slope you’ve had your eye on for days?

More than 1.3 million Brits will enjoy a snowsport holiday this winter. A few will be experts, some will have a handful of holiday weeks under their belts but many will be stepping onto snow for the first time. While the first, tentative snowplough may seem daunting, remember that you are not alone; those fluent skiers making perfect, effortless turns went through this stage, too.

Spoilt for choice
The joy of wintersport is its choice, in both sport and destination. You could go cross-country skiing in Finland, easing over creaky-cold snow in the strange half-light of an Arctic winter. You could slide down groomed pistes, stopping for jagertee in pretty alpine restaurants in Austria. You could ski under lights on the perfect slopes of USA or ride powder in the back bowls of Canada.

You could – if you could just choose where to go and how. The key to a fun wintersports holiday is selecting the resort with the right facilities for your level. While nightlife and extreme runs may be the elixir of life for some, others will search out creches or accommodation close to the slopes. Some people want to find their own way, others prefer to be guided.

Luckily, it’s easy to make the right choices. One reason package holidays remain the most popular option for snowsports holidays is that the companies offer a wide range of destinations and convenience in booking everything, including ski hire, lift passes and instruction, at one time. All-inclusive chalet deals are by far the most sought-after, and are often cheaper than self-catered apartments or bed and breakfast hotels.

Tailor-made trips, while generally more expensive, attract a healthy following. Decadence is often, but not always, the name of the game, with themes such as gourmet cooking or the very best in childcare. Luxury ski operator Powder Byrne, for example, specialises in family holidays. But there are also more independent ski companies being set up as people buy chalets in resort areas, and set up their own operations. Like the big package companies, these chalets tend to offer full board and cosy accommodation; usually, you have to organise your own transport but often they will provide in-resort transport and a ski guide.This kind of independent holiday is gaining in popularity because there are more budget airline routes than ever before, making fly-drive holidays an attractive choice.

Cross-country skiing has a growing fan club, with companies like Headwater offering holidays in places you’d never think of for skiing. The Italian Dolomites might double as a downhill and cross-country destination, but Pailherols in France’s Auvergne, Lapland or Algonquin in eastern Canada? Algonquin, as it happens, is rather special: a romantic, couples-only lakeside retreat with luxury log cabins, private saunas and gourmet cuisine… really, who cares about the skiing?

Like its downhill cousin, this kick-and-glide sport has a wide range of ability levels. You can choose to ski ‘classic’, sliding easily along undulating, groomed surfaces. Or you can pick up the pace and skate, thrusting arms and legs backwards and forwards in a vigorous, aerobic action. Skaters must be among the fittest athletes on earth; once you’ve been overtaken by what appears to be two massive thigh muscles with a little body on top, you’ll never be tempted to write off cross-country skiing as an easy option.

Closer to home
Of course, you don’t have to travel internationally to ski or board. While snow conditions are not often comparable with Europe or North America, Scotland can offer all levels of snowsport. The main resorts include Cairngorm, Nevis Range and Glenshee, but be warned - a week’s skiing here has a similar price tag to a week at a cute, snowsure destination in Europe. For those with a penchant for a quirky day out, it is also possible to ski, in a rugged, “one drag lift operated by a tractor engine” way, at littleknown club fields at Yad Moss in Northumberland or the hard-to-find piste on Helvellyn.

Indoor slopes are becoming increasingly popular; many of the artificial slopes have been covered by new materials like Snowflex and Permasnow which are safer and softer than the old artificial snow. These are excellent places to learn the basic techniques, so you can maximise your time on real snow when your holiday rolls around. The SnowDome at Tamworth (which uses real snow), Sheffield Ski Village and Xscape slopes at Castleford (Leeds), Milton Keynes and Braehead (Glasgow) are among Britain’s best. There are also plans for a large slope in the Suffolk area.

While the indoor slopes are a fine way to bring your wintersport holiday a little bit closer, there’s nothing to compare with the real thing. Think of this: of riding a cable car to 3200m, into a blue-sky morning. Of watching the sun sparkle on the glaciers of Mont Blanc, and then of gliding towards them. Of stopping for a coffee at a wooden restaurant in the trees, watching bold birds peck croissant crumbs off the balcony. Of taking your fiveyear- old on her first blue run and watching her face as she shows no fear. Of knowing she is, likely, hooked for life. And maybe, like her, you will be seduced… seduced, forever, by the white stuff.