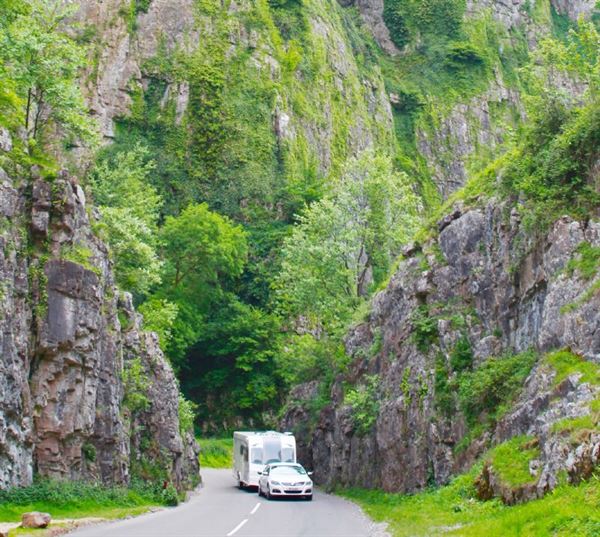 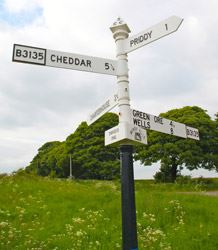 Gorge-ous caravanning at its best


Ben and I are going stir crazy in the office, so it’s decided that we should head out on tour for
a week to clear our heads and rediscover the joys of caravanning, after spending only the odd week out this year.

Our tourer of choice for the trip is Bailey’s new(ish) Pegasus Verona GT65 – a cool-looking four berth, single-axle that weighs in at an accessible 1448kg. That makes it an almost ideal towing partner for my VW CC, although the towing ratio does push The Club’s sensible 85% rule to 92%. That said, there’s nothing in the van and the car is fully loaded, so the Bailey tows as brilliantly as expected.

Mendips, Quantocks, Exmoor. Oh, and Glastonbury Tor. Greedy Somerset has an embarrassment of hills, all contrasting nicely with its central lowlands, the Somerset Levels. We take a look at the map and decide to keep it simple, heading from east to west.

The tow from Bristol is pleasant and uneventful. We stop off en route at the Winford Arms in Dundry for lunch, where we get served Cider (soy-der) instead of the Soda we requested. It takes us a minute to twig what went wrong. Luckily, being a fan of The Archers means that I'm semi-fluent in the local lingo and can rectify matters.

Our first stop is the region’s major attraction, Cheddar Gorge. This gaping crevasse slices asunder the gently-rolling Mendip Hills, and was formed 1.2m-years ago by periglacial meltwaters, that cut their way through the soft limestone rock (It is definitely not made of cheese, as most GCSE geography pupils believe. Probably).

In the Summer, Cheddar village and the lower section of the Gorge are extremely busy, but we find them reasonably quiet and park up to grab a coffee and use the free wi-fi at the ubiquitous Costa Coffee shop. We also get permission to take photos in the Gorge from the management office. The south side of the Gorge is owned by the Longleat Estate, while the National Trust oversees the north cliffs.

Visitors can also descend into Cheddar’s Cox’s Cave, Gough’s cave or experience the Crystal Quest adventure. Above ground, there are climbers on many of the rock faces, while the adrenaline-challenged visitor can head into the fascinating Museum of Prehistory (Britain’s oldest skeleton was found here – no, not Madge off Benidorm!).

For the more energetic, there’s a 274-step climb out of the Gorge followed by a further 48 to the top of the Lookout Tower. From here, 360° gob-smacking views are available. Still got energy? A three-mile walk runs right along the cliff-top. Take your camera and allow 90 minutes. Sadly, we had neither the time, nor the energy!


Just as you thought it couldn't get better

From the bottom of the gorge we head up the B3135, Cliff Road. The canyon gets increasingly dramatic as you ascend and we stop frequently to soak up the majestic vistas and to take photos and video. Parking the outfit is easy out of peak season as there’s a large Tarmac area for coaches and several gravel areas too. If you’re towing in peak season, aim to be there early or late.

A few miles up the B3135, we head right towards the village of Priddy and here, just past the Priddy Good Foods farm shop we find our first stop: Cheddar Mendip Heights Camping & Caravan Club site.

Wardens, Alan and Kate Sefton, make us feel welcome immediately and escort us to our pitch. Ben slots the van on first time and we set about steadying and levelling. 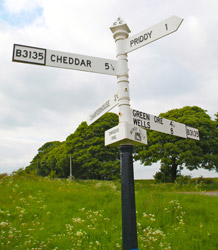 With the caravan parked and our cargo unloaded, we head off to nearby Wookey Hole, an attraction that promises ‘Famous Caves & So Much More!’

The caves are quite astonishing, and enhanced by theatrical lighting (see our Going Underground feature in the next issue), but quality photos here are not easy to capture without a tripod, a steady hand or camera-shake-reducing technology.

With 200 steps to contend with and some moderate bending required, the cave tour isn’t for everyone and there’s no access for wheelchair users. For others, making like a troglodyte is recommended and with other attractions added in, Wookey offers a good half-day’s entertainment.

We head back to Mendip Heights where there’s a very peaceful air to the site, surrounded as it is by beautiful open countryside. The GT65 is a particularly nice tourer to spend a holiday in. The interior is plush with acres of medium-dark wood-effect panels and inoffensive floral fabrics in various shades of cream and fawn.


There's always time for the pub

When hunger pangs kick in we take the 20-minute walk into the village of Priddy to find the local pub, The Queen Victoria. The village has an air of the Marie Celeste about it, but The Queen Vic turns out to be a proper "coun'ry" pub, busy for a Monday, and with a good selection of real ales (including some delicious local Butcombe brews), open fireplaces, quirky sense of humour and a varied, mid-priced menu. Ben takes the gammon/egg option while I do steak and salad. Both are excellent.

Over a pint of Butcombe Great Grey Owl, we reflect on a successful and interesting first day. The highlight for me is undoubtedly the Gorge which gets better and better the further you drive up it. The 400-foot limestone walls creating the perfect backdrop to our amazing outfit.

After a nightcap of the Scottish variety, we amble back the van, illumination provided by my new Maglite LED torch, which has a beam so powerful it feels like you’re holding a Star Wars lightsaber!

It’s midnight and the site is completely silent as I hit the super-comfy fixed double bed, while Ben (voluntarily) folds his six-foot frame onto the slightly-too-short front sofa – he’s too lazy to make up the gargantuan front double! We’ll see whether he thinks that was a good idea when he uncreases himself in the morning!

Pick up brochures and maps from Tourist Info centres and campsites which feature useful maps and discount vouchers such as £1 off each entry to Wookey Hole, or a free child entry to Haynes Motor Museum. Check out Caravan mag for more great holiday ideas and the in-depth Somerset Tour feature.