Why Get Solar Panels for Your Caravan? 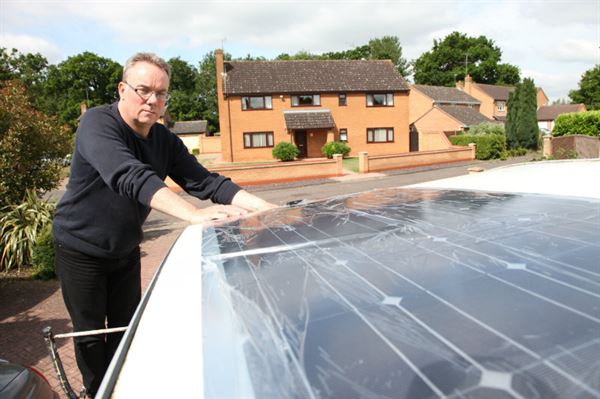 Mark Williams explains why it makes sense to have solar on your caravan, especially if you want to take advantage of sites without a hook-up – often cheaper sites with the best views and most charm!

What is a solar panel?

Solar PV (photo-voltaic) panels use two layers of different types of silicon which, when exposed to sunlight, interact to produce an electrical output.

It's a simple, direct current (DC) current, which varies depending on the intensity of the light, but delivers a constant 17 Volts. This, alone, would be useless, as batteries charge at a lower voltage, and over-charging would damage the battery – as would 'feedback' from battery to the solar panel. 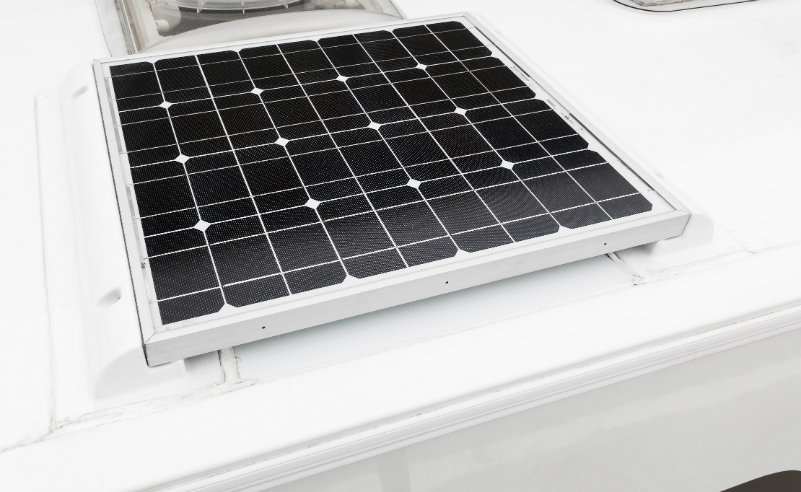 What are the benefits of solar charging? 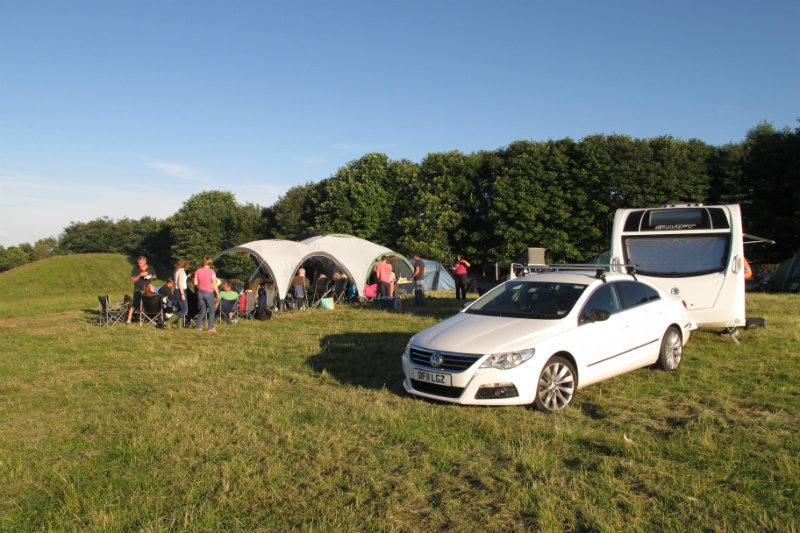 There are two main benefits: one is keeping charge in your leisure battery when you are using your tourer off-grid, the other is to maintain your battery’s condition when it’s not being used or it’s in storage.

When I'm not towing caravans, my other pleasure is riding motorcycles. But as with caravanning, there are long periods when my pride and joy is motionless.

While it's in the garage, the bike is attached to a cable, and attached to that cable is a trickle-charger, which keeps the battery topped up. Now, it's a fact that the lead-acid batteries we use for our cars, caravans and motorcycles do not enjoy being left discharged.

And unlike the light coating, this cannot be turned back to lead dioxide by recharging. The battery is now scrap.

I'm not about to suggest that solar panels are the perfect answer to the problem. But they can, nonetheless, significantly prolong the life of your expensive leisure battery.

When you consider a battery, without anything connected, will lose charge at about four per cent a week, four months in storage will be enough to cause significant damage to it.

Ideally, remove the battery if the van is being stored for months, take the battery home, and connect it to an 'intelligent' maintenance charger until you're ready to go again.

Are there different kinds of panel?

Much more important is the quality of the panel, so at the least, go for the middle ground, price-wise, and perhaps see what buyers have had to say about the products in internet reviews.

There are too many brands (some sourced from the same factories) to list here.

What sized panel do I need?

You can make a rough calculation by totting up the power consumption of every light and appliance in your caravan, but there's a better place to start.

First of all, if you are ALWAYS going to be on a hook-up, you do not need a solar panel. In use, your caravan will charge its own battery, and off site, you can remove the battery and keep in on a trickle charger.

But if you anticipate being off-grid, or have reasons not to want to remove the battery (alarm and tracker etc), a solar panel will be helpful.

If you are going off-grid, you should start by considering swapping out all your tungsten lights for LED units, and leaving the electric kettle at home. Basically, get your leisure battery usage down to the minimum.

Maybe play cards instead of watching TV. Run your laptop off its own battery, and let it recharge in the day when you're out (assuming you have an inverter).

To keep your leisure battery topped up on the average four-berth while off-grid, you will need a panel of at least 80 to 100 Watts rating and clear skies.

A 100W panel will replace the power used by LED lights, a radio and your water pump comfortably. Your fridge will need to be run from the gas.

If you want to merely keep the battery in good condition when the caravan's unattended, you can use a lower Wattage panel but, to be honest, the savings in cost are barely worth having.

What kinds of panel are there? 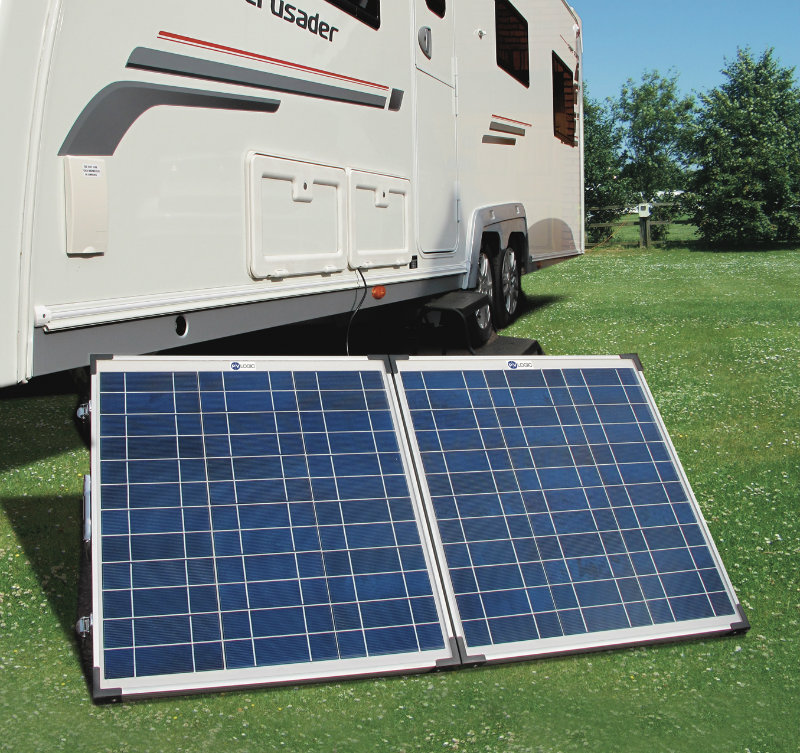 For many people, a rigid, standalone panel, which can be set up outside, is a good way to go.

The only risk is someone will steal it, so take along some way of securing it to your van. Also, it will have to moved or turned during the day to keep it pointing in the correct direction for optimal charging. At nighttime in summer, you should place it in the right position to catch the following day’s sunrise.

The solar landscape has changed a little in recent years, with thick, heavy framed panels facing increased opposition from the introduction of flexible solar panels.

In the past, you had to screw brackets to the roof of your caravan to fit a solid panel, and many people understandably didn't want to make such modifications. A curved roof added further complexity to the fitting.

Flexible panels are just as effective, charge-wise, and are simply glued in place with Sikaflex or a similar bonding adhesive. You may have to drill a hole in the skin of the van somewhere to feed the cable inside, but that's easily sealed. Alternatively, some DIYers use the off-side awning rail to feed the cable down to the base of the caravan, nearer the controller and battery box. 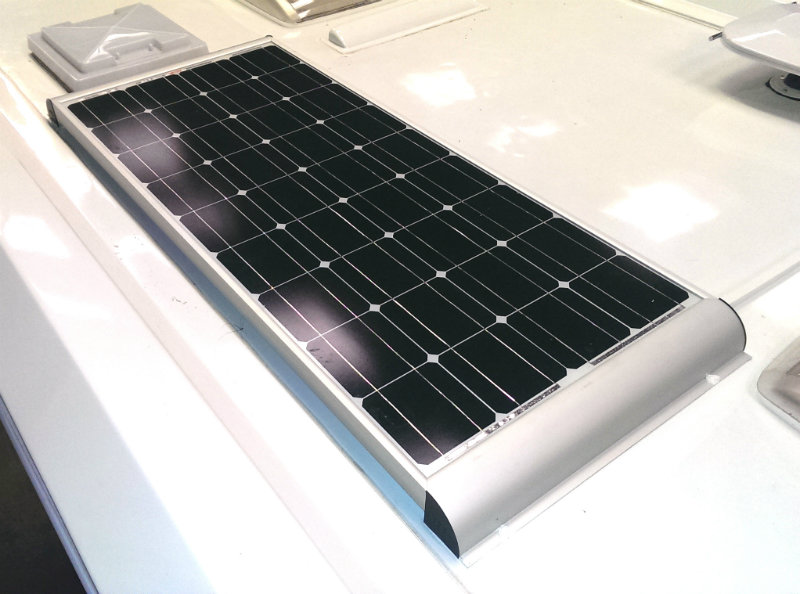 Anything else to know? 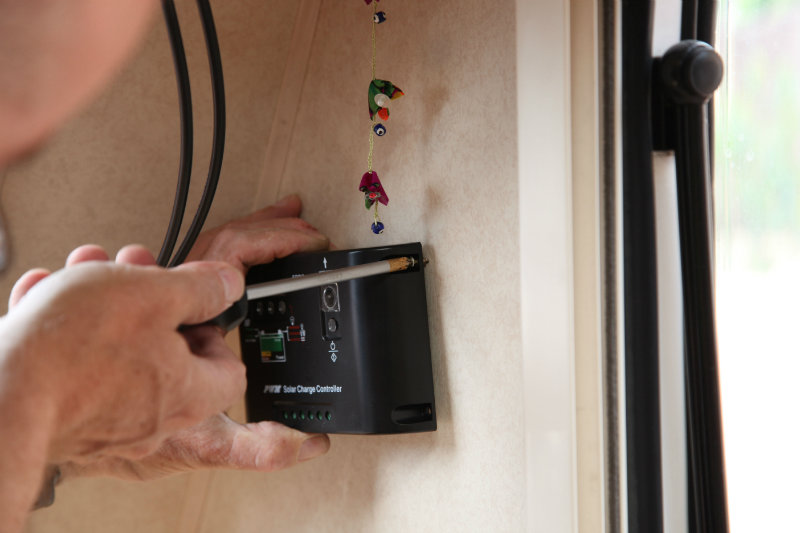 Yes. All solar panels connected to a battery need to have a charge controller fitted in circuit, inside the caravan, to ensure the battery is not overcharged.

Many kits come with a charge controller, but although the supplied charger with a 'bargain' kit will do a reasonable job, it's a wise move to invest in a more expensive one; look on the charge controller as a permanent fixture once fitted, and spend as much as you can afford.

Quality charge controllers have circuitry that makes 'intelligent' decisions about the pattern of charging, and will prolong the life of your leisure battery.

And, by the way, fitting a properly-fused solar panel is well within the scope of a keen DIYer, as it does not use the mains circuit. Badly fitted, though, it may be a fire risk. If you have any doubts, get a specialist supplier to fit the panel for you. 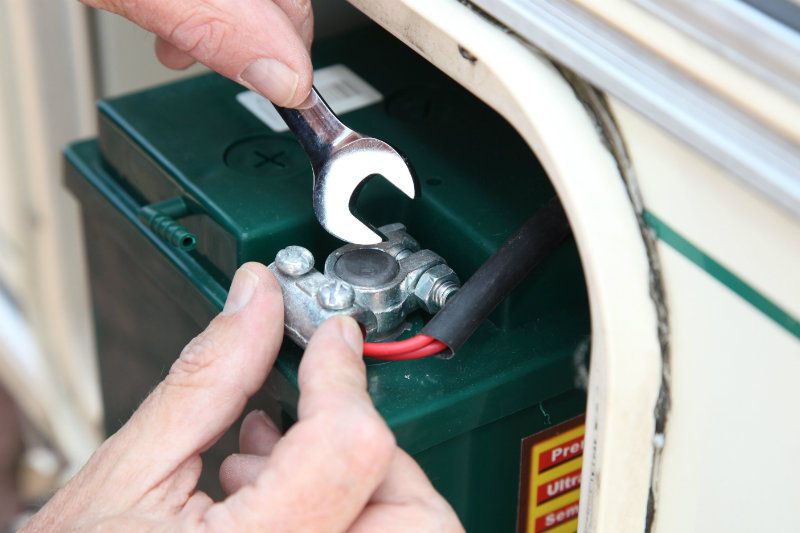 A guide to solar power