DIY: Upgrade to LED lights in your caravan 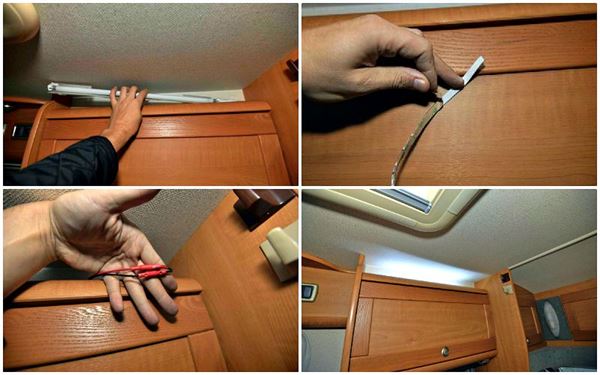 DIY: caravanning projects to try yourself

You’ll need a set of wire cutters and crimpers to replace the wiring, plus a selection of terminals

If you’ve got a second-hand caravan, one of the things that can let it down inside is fluorescent tube strip lighting. These lamp units are found above the lockers in the lounge and above and below the kitchen cabinets.

The fluorescent tubes not only give off a rather dull light, but they’re also pretty slow to light up and, worst of all, take far more precious energy out of the leisure battery than they should.

The obvious choice is to replace them with LEDs, which will not only help brighten the interior, but will also last longer and use less current. All useful attributes, especially when camping off grid.

We’re going to use different light units underneath the kitchen cabinets (which are individually switched on a permanent feed) so the main focus of this fitment was to replace the overlocker light units. Self-adhesive LED light strips are widely available across the internet, but it’s wiser to buy them from either a caravan show or your local caravan dealer.

These tend to be better quality than the cheapest options you’ll find online.

With this in mind, I bought four LED strips from Lowdhams in ultra-modern cool white for £9.49 each (50cm strips from Aten Lighting). You might also find what you are looking for online.

If you prefer, you can also get warm white LEDs which give a more yellow glow and look like halogen lighting

1 — Remove the old fluorescent tube lights above the high-level lockers. They’re held in place with self-adhesive foam tape and you can prise them up with just your fingers. Remove them and carefully let them dangle. 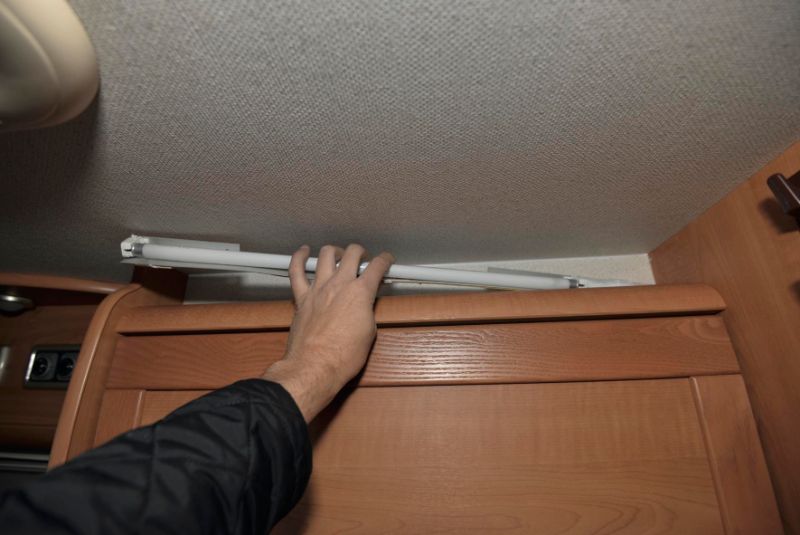 2 — Cut off the old wires one at a time with a pair of side cutters. Don’t be tempted to cut both wires simultaneously, as you will blow the fuse on the lighting circuit. 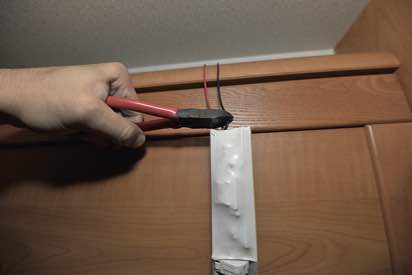 3 — This is the LED light strip made by Aten Lighting from our local dealer. You can get these in various lengths to suit your application and it’s best to look for ones that are already fitted with red and black wires on them. 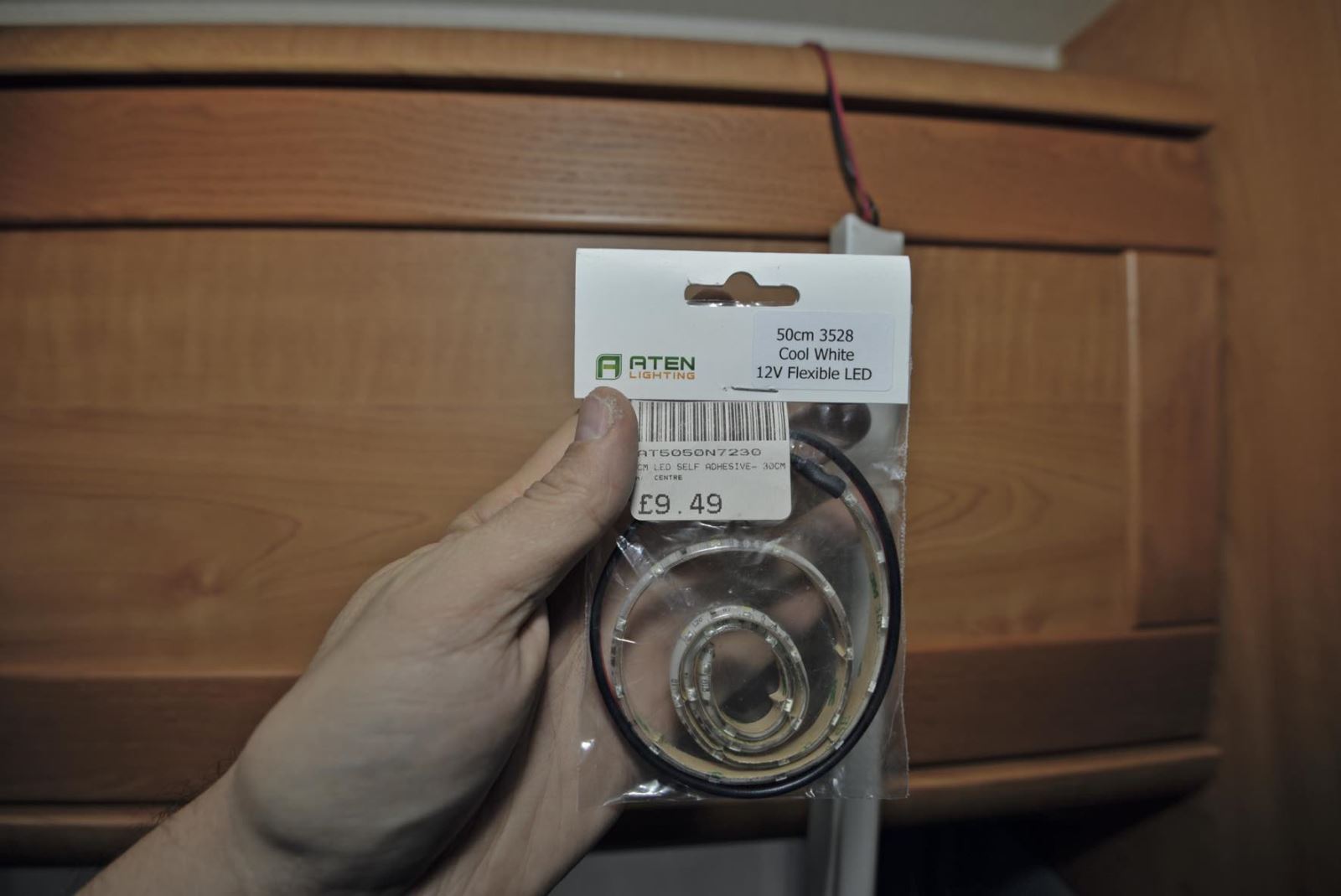 4 — Remove the LEDs from the packaging and crimp on a set of terminals. I use the male part of the terminal on the red positive feed wire, and the female part on the black negative wire to avoid mixing the polarity up. 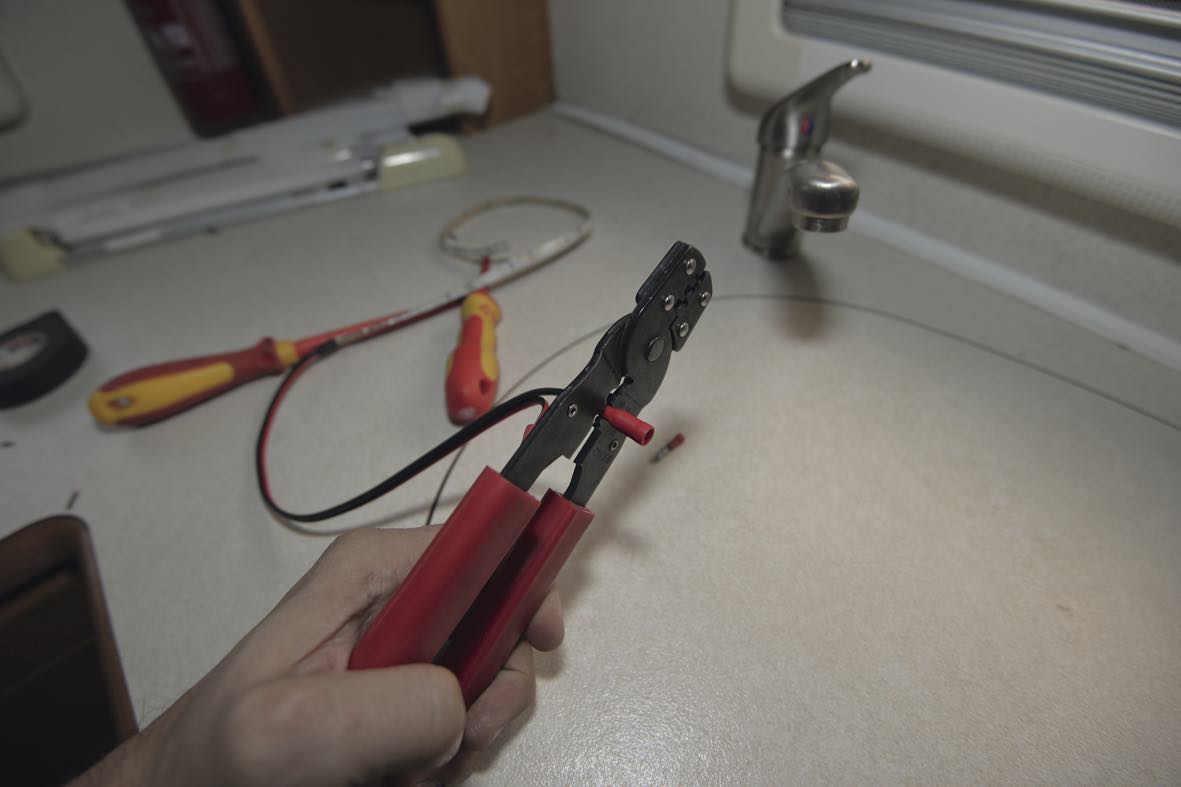 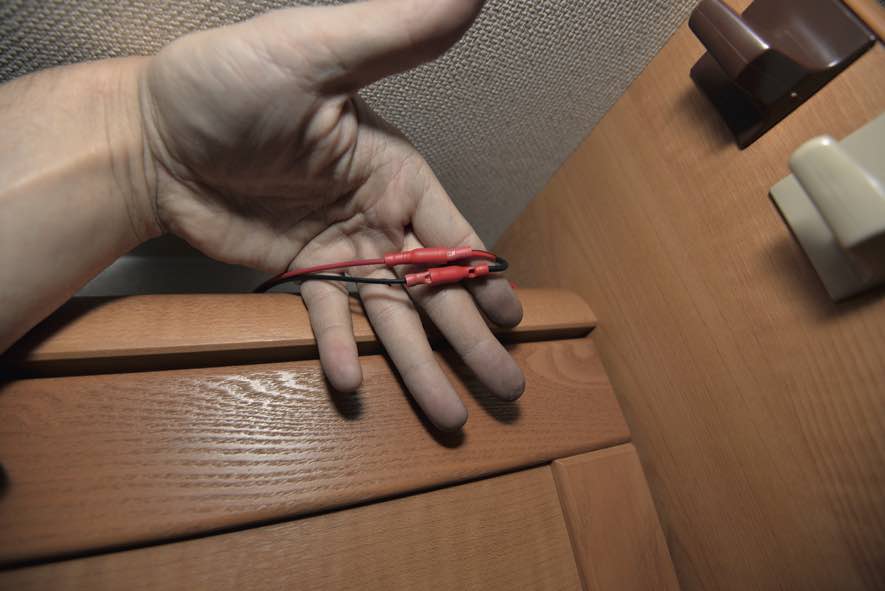 6 — Plug the terminals together, switch the lights on and check the light strip works. If it doesn’t, check your wiring — LEDs don’t work if the positive and negative are transposed. 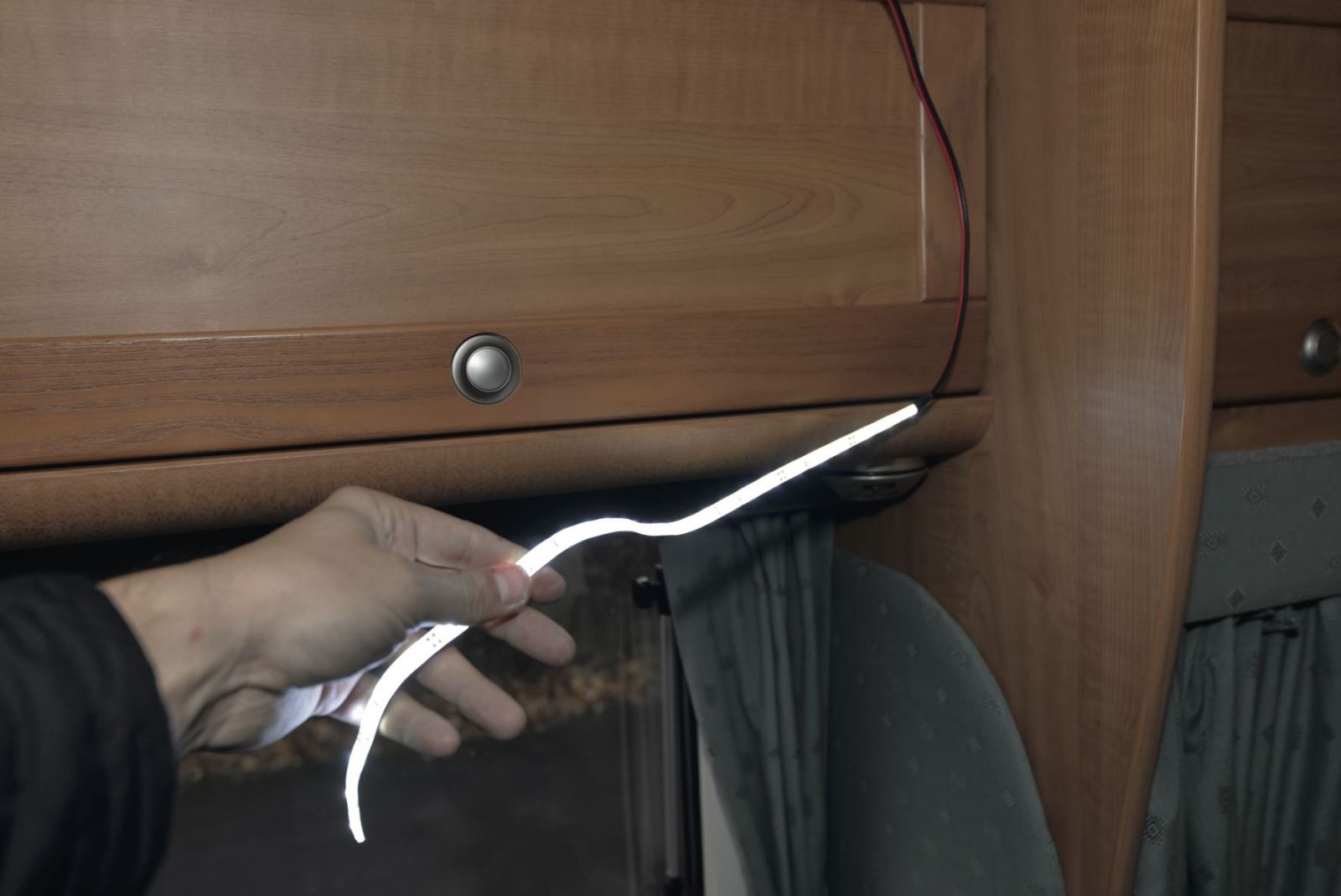 7 — Once you’re happy that the LEDs work as expected, peel off the self-adhesive backing (Using a sharp blade helps as they can be tricky to peel up an edge) and stick them in place above the roof locker. 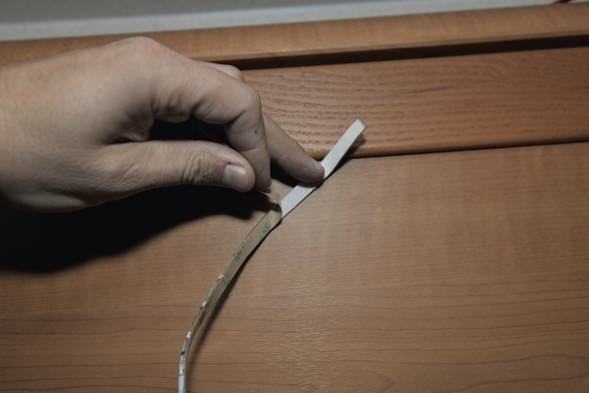 8 — Tuck the wiring out of the way, switch on and admire your new modern lighting! Four of the lounge lights were replaced with three LED strips and it took under an hour to do the lot. So, a great result for the time taken! 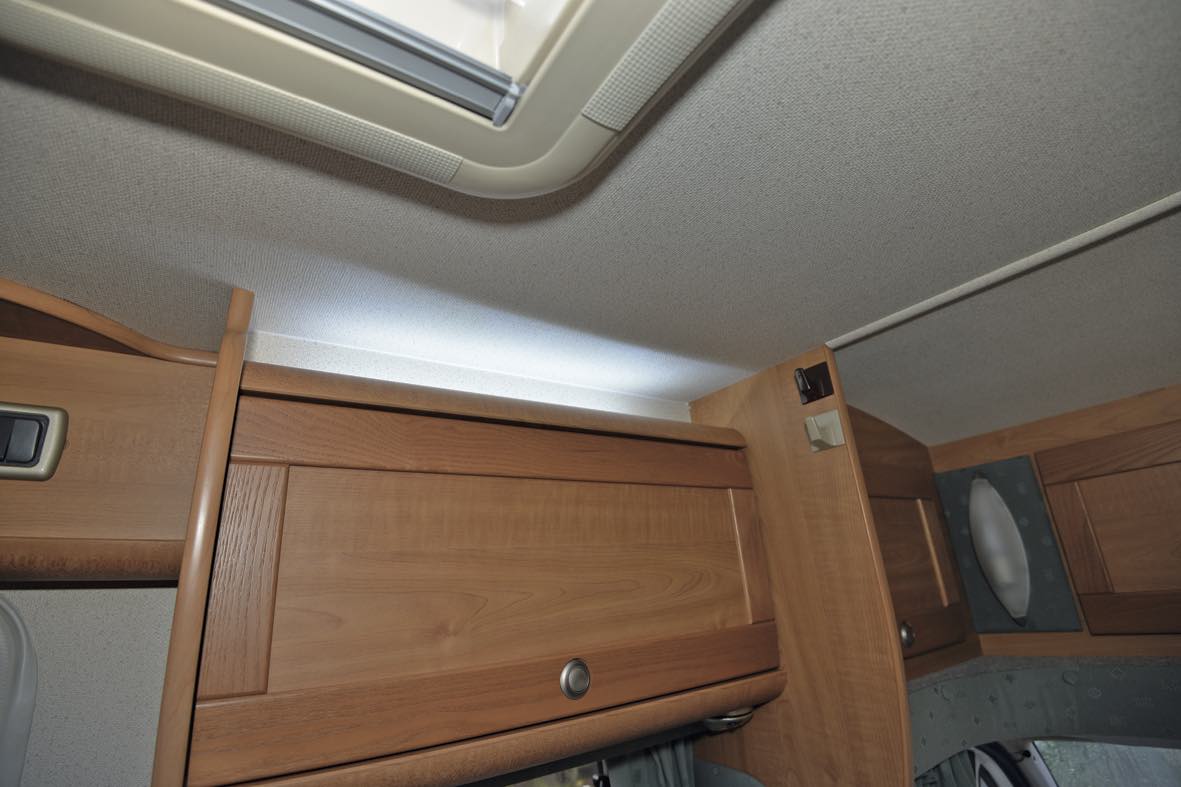