If you're thinking about buying a new or used caravan for the first time or considering a model upgrade, the layout is an all-important factor in your decision. Here, we guide you every step of the way to choosing the caravan layout that’s ideal for you

Twenty years ago, couples bought two-berth caravans and this kind of market polarisation had pertained for decades. They all largely had the same layouts: two settees that convert into single beds (or a large double), a rear kitchen and a combined toilet/shower compartment in the offside corner. It was a classic small-caravan arrangement that worked and sold extremely well. Then two things changed. The advent of the separate shower signalled a drop in the number of shared toilet/shower compartments and, with it, the end of nylon shower curtains and confined washing spaces. Caravan showering became a rather luxurious experience.

The second change was the arrival of the fixed double bed, which then shifted the whole dynamic of caravans for couples.

An example of a compact caravan for two is the Compass Casita 454, which has an island bed and an L-shaped lounge. The same layout appears in the Elddis Avanté range, which is built by the same company.

Today’s tourer choice for couples spans the entire caravan size spectrum. You can still get tiny tourers for two. You can also get super-luxury spacious tourers, designed primarily with couples in mind, but which are in fact four-berth caravans, with permanent beds and also a lounge that can be turned into a second bed.

Call it the guest bedroom, as it can be considered equivalent to a spare bedroom in a house, ready to be used when needed. There’s a raft of layout choice – along with price and weights. Broadly, these caravans designed for couples are divided into four layout categories: 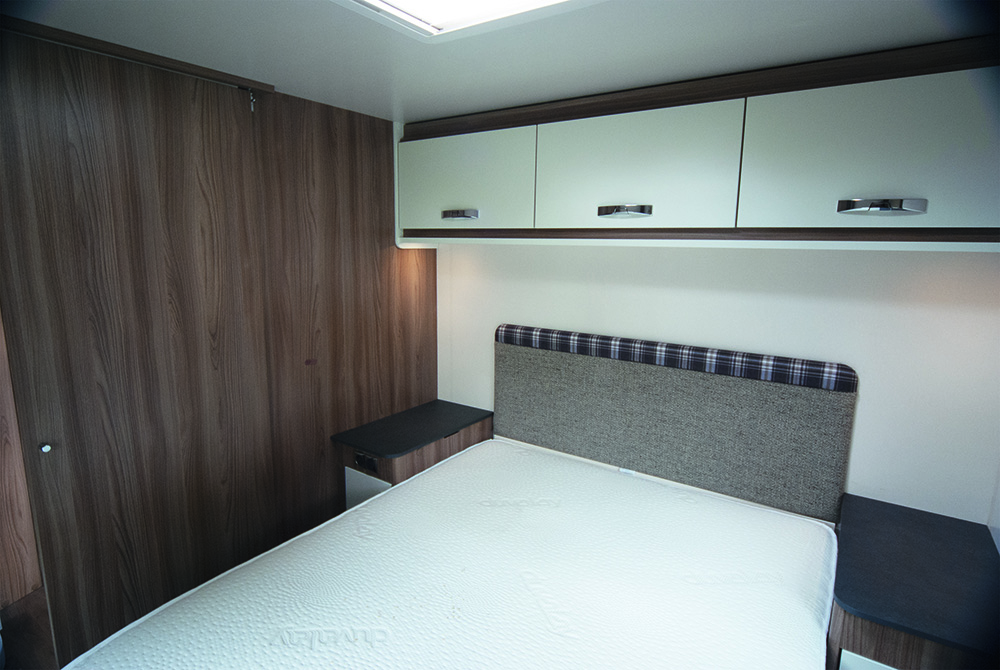 The Sprite Super Quattro EB, with an island bed and rear shower room

Twin beds
Most caravans with twin single beds have the shower room at the rear. A few have the beds at the rear and the shower/washing facilities forward of the beds. All have four berths, with lounges that transform into either two singles or a double bed.

This layout has an interesting flexibility. While the vast majority of twin bed caravans are bought by couples, this layout can equally well suit families who are looking for twin beds for offspring in the teen years – they get their own ‘bedroom’ and mum and dad can make up a double bed in the lounge. 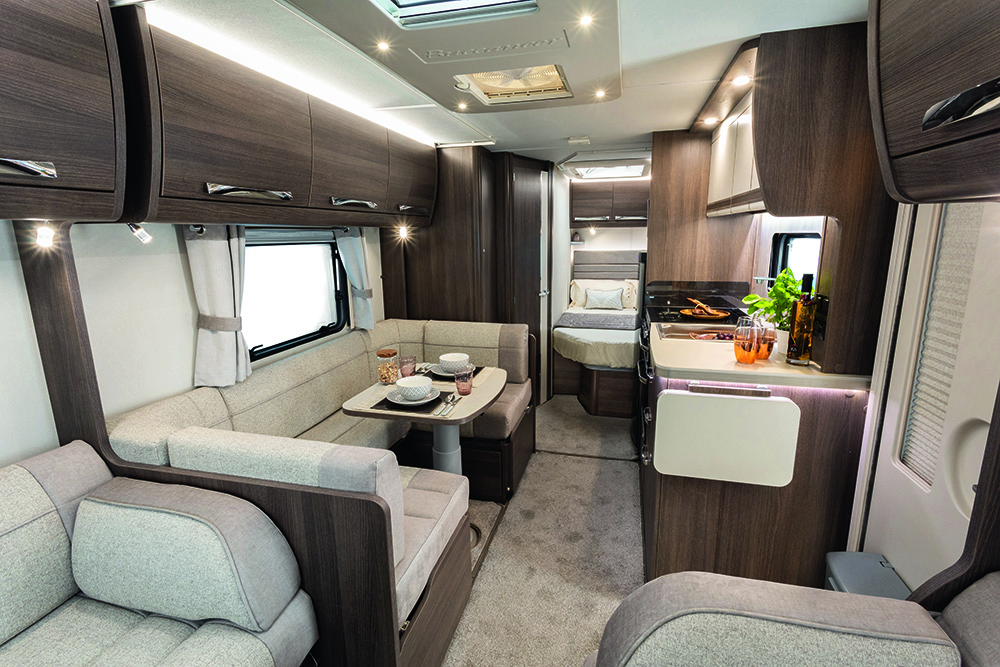 The Buccaneer Aruba features a double bed with shower room alongside

Side double beds
When fixed double beds arrived as a layout concept, all of them were at the rear along one side of the caravan, with the shower/washroom either across the rear or in the corner, beside the bed. Now, this layout has largely fallen out of fashion among new caravans, as island bed caravans have risen in popularity.

Layouts have fashions and phases, which is particularly important if you are looking to buy in the pre-owned market. There, you will still find a good choice of caravans with side double beds.

One variant, though, is very much on-trend. That’s the double bed on one side with a longitudinally aligned shower room alongside it; an example of this layout is the Buccaneer Aruba (pictured above).

Classic two-berths
Even though caravans with fixed double or twin beds have overtaken the classic two-berth in popularity, there are still some on the new market as well as used. Kitchens are positioned in the middle of the caravan or at the rear. And, in recent years, there has been an evolution of the traditional two-berth end kitchen concept.

Acting on the rise in demand for caravans with separate showers, manufacturers now produce two-berths with both end kitchens and end shower rooms. How? By aligning the shower/toilet/washbasin elements down the caravan, rather than across the rear, so that the shower/washing 'room' sits alongside the kitchen.

Lightweight or luxurious and everything in between, there is a vast choice of layouts designed for families. You can get four, five or six-berth caravans – and a few even have the capability to sleep seven people.

Here are some of the most popular layouts:

Four-berths with double beds
There is a crossover here between layouts that appeal to both families and couples. Almost all layouts with double beds have four-berth capability and, although most are bought by couples, the front settees can be used as single beds (depending on the length of the settees and the sizes of the children). It’s a great layout for occasional visitors – grandchildren, perhaps. And, of course, the lounge can be transformed into a double bed.

The top bunk base hinges up from the wall
The mattress is provided in sections and is usually stored under a settee. The lower bunk is created from the two facing seats plus a centre section, which is either wooden slats, linked by webbing, or the table that is removed from its clip on the wall, its leg folded and then positioned on two ledges on the edges of the seating bases.

A ladder is provided for easy access to the top bunk. The result is two bunks, which make an ideal children’s ‘bedroom’ with a curtain that tracks around the area. Kids love bunks – often for no other reason than it’s different from home and so they regard them as fun.

Something to consider when assessing whether a side dining area bunk arrangement is ideal for your family is the ages, and therefore the heights and weights, of your children. Most top bunks have an upper weight limit stated on a notice on the side of the bunk. Bunks are narrower than domestic-sized single beds and many are shorter, too.

If you are buying new, bed sizes are available on manufacturer websites, so you can do your detailed research before you begin to look at caravans that may interest you. If you are looking at used caravans, our advice is always to take a tape measure.

Five and six-berths
There’s a good choice of five-berth layouts. Which you prefer will largely depend on the ages of your children and whether a caravan with a bed area that’s well separated from the rest of the caravan will work best for you.

Two lounges
The twin lounge concept was once a mainstay of family caravanning. Each end could be used as a lounge, dining area or play area while the other is used for a different activity. And each end makes into beds, either doubles or twins. Layouts go through fashion phases and twin lounges have largely disappeared from new ranges. So, if you think this arrangement will suit your family, you’re best advised to look on the used market.

There is, though, one newcomer for 2020 that has two lounges. It’s the Bailey Discovery D4-3, an ultra-lightweight three-berth (1,082kg MTPLM; £16,999). One end makes into a double bed and the other transforms into a wide single bed. 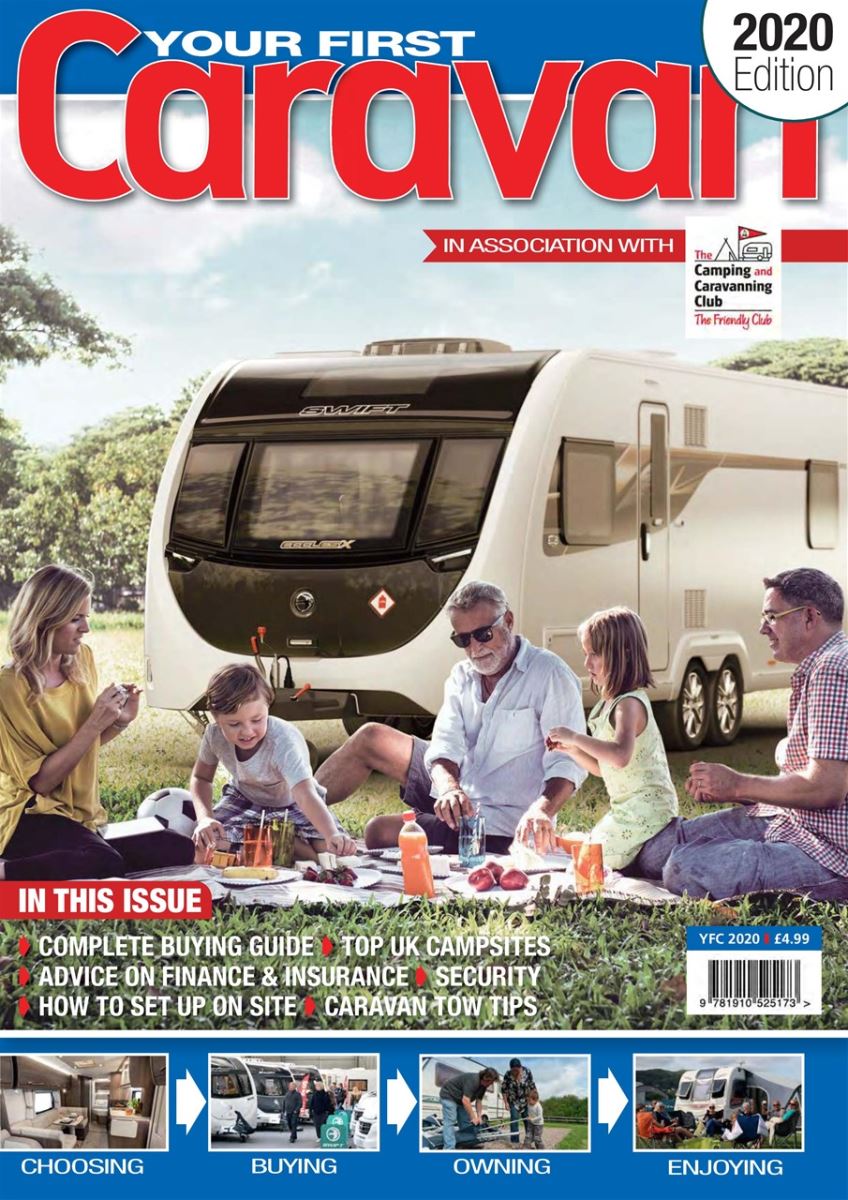 Your First Caravan gives you all you need to know to get started, with advice on: