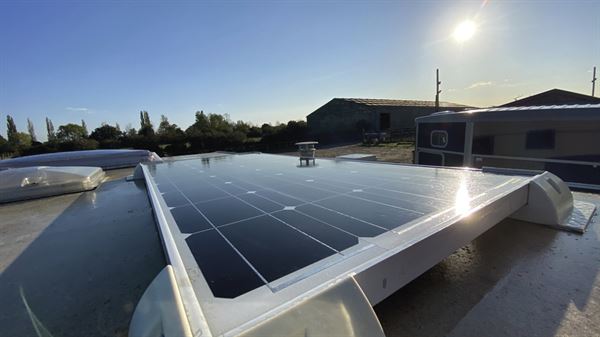 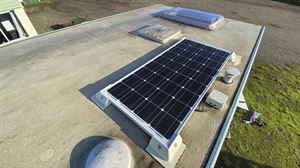 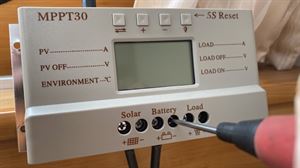 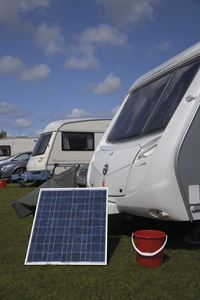 Words and Photos by Jim Blackstock

A quick drive around the countryside will reveal that solar energy, along with wind and other forms of cleaner power, is becoming the norm.

Solar farms are popping up everywhere and with good reason – it’s a clean and increasingly efficient form of generating energy, converting the sun’s rays into electricity.

And that free energy is available to caravanners, too. Several years ago, the price of solar panels meant that it was the sole domain of the well-heeled. However, like so much technology, the price has come down so that now, there’s no reason not to soak up some rays and turn them into power.

Last summer I fitted a simple 100W solar panel to the roof of my caravan and with a relatively inexpensive charge controller, I can now run my caravan, with the four of us in it, indefinitely off solar energy.

Free (once installed) and limitless (though reduced in winter), it’s a solution to consider.

Here’s how I fitted mine…

Fitting a solar panel to a caravan: things you need to know

1. The first thing to do was work out where to put the panel. I opted for this side of the roof, nestled between the bathroom vent and the exhaust for the heater.

2. I assembled the kit myself, to save a little money, and went for these moulded mounts. They lift the panel off the roof to allow air movement underneath for cooling.

3. Next I had to fix the panel to the mounts. Each corner mount needed a clearance hole for a screw drilling through all the way, on both sides of the corner piece.

4. I next sized a drill so that I could put in a pilot hole for the stainless—steel self-tapping screws I would use to fix the ABS plastic mounts to the panel itself.

5. With the pilot drill chosen, I drilled a hole all the way through the aluminium frame of the panel. I checked to make sure this didn’t go into the matrix itself.

6. With a pilot hole drilled and the hole itself deburred, I used stainless-steel self-tappers to hold the panel and the mount together.

7. Two screws were used in each of the corner mounts for security. For larger panels, you might also need a mount on each of the long sides but this wasn’t necessary here.

8. With the position of the panel now chosen, I applied a strong grab adhesive to the bottom of each of the mounts, corresponding to cleaned and roughed roof sections.

9. Each of the corner mounts was pushed down into the roof panel for the time specified on the adhesive. I then left these to cure for 24 hours before the next stage.

10. Moving inside the caravan, I needed to work out where I wanted the cable from the panel coming inside. I chose a section in the wardrobe, close to the outer wall.

11. I measured from both the exhaust vent for the heater and the inside of the inner wall to work out exactly where I needed to drill the hole through to the top of the roof.

12. I had decided that I wanted all my connections in a watertight junction box, so I measured where this should go, so the centre corresponded to the hole’s location.

13. Once I was happy with the location of the junction box, I used the same adhesive to stick it to the roof. I used a continuous bead to prevent water getting to the hole.

14. Having triple-checked my measurements, I was happy with the position of the box, so I drilled through the centre of the box and into the caravan’s interior – scary.

15. Back inside the caravan, I fed the main cable up through the hole to connect above. I chose to use 25A-rated cable, as I may add another panel in the future.

16. I pulled plenty of cable up through the hole as it’s easy to trim to length. I also added a tie-wrap tightly to the cable so it couldn’t disappear back down the hole.

17. With the right length of cable and the cable itself secured, it was time to add some silicone sealant around the base of the wire to ensure that no moisture entered the caravan.

18. I decided to use ‘chocolate block’ screw terminals to join the wires. I stripped the two-core main cable and fitted to two of the terminals in a three-way block.

19. I’d also added a fuse on the panel feed, for safety, so I fitted an inline fuse holder across the two outer terminals, to feed into the caravan.

20. The solar panel comes with quick-release connectors but I chopped these off (to use later) and fed the wires directly into the junction box. Insulating tape denotes negative wire.

21. So the positive from the panel is fused and connected to the positive end of the main cable and earth to earth. At this stage, I left the fuse out so nothing is live.

22. Back inside the caravan, there was a conduit in the wardrobe housing what appears to be pre-prepared wiring for a TV aerial. I tucked the solar main cable in here.

23. The cover popped back on the conduit and the unholy mess of cabling behind was hidden from view again. Good job, too.

24. I ran the main cable down to the bottom of the wardrobe and along the main wiring run, behind the cooker and fridge and into the front under-seat storage area.

25. Next I had to decide where to fit the controller. You don’t have to be able to get to it but I chose behind the circular seat cushion, so I could check on power supplies.

26. Back under the seat, I branched off another cable, with the same polarity to run into the battery compartment. The main cable continued to the controller location.

27. I then ran another length of 25A cable from the controller location into the battery compartment, this time alongside the main cables from the on-board charger.

28. Outside, in the battery compartment, I bound the solar panel cables to the main battery cables with insulating tape, to keep them secure.

29. I crimped another inline fuse holder into the feed from the solar charge controller to the battery, once again for safety and to be able to isolate the system.

30. I stripped the other end of the fuse holder, and at this stage I left any fuses out while I finished off sorting all the wiring out.

31. My caravan is fitted with these quick-release pop-off battery clamps and the solar charger cables simply screw into the back of the terminals alongside the main cables.

32. This is the branched cable from step 26. I used a waterproof gland to run it out into the battery compartment, under the main 240V hook-up socket.

33. I fitted the outer ends with quick-release connectors similar to those supplied on the panel. This allows another panel to be added to increase charging.

34. Now to wire up the charge controller. It was dead easy – positive and negative from the solar panel and the same out to the battery. I didn’t use the ‘load’.

35. The only thing remaining was to fit fuses to both the solar panel and the cables to the battery to power the whole thing up and, within moments, we were on.

36. This particular charger shows all sorts of information, including rate of charge into the battery and the state of the battery itself. This was 0.4A with thick cloud.

37. However, on a sunny autumnal day, even with the panel flat on the roof, it was still putting 2.0A into the battery. Free, clean and endless.

I did some research before choosing and buying the kit for this project and made my decisions on the following basis:

● Monocrystalline panels are more efficient than polycrystalline or thin-film ones but are more expensive as a result.

● I mounted the panel with an air gap under it to allow cooling, as heat reduces efficiency.

● Ideally, the panel should be aimed due south and angled at 30-40° but I chose to mount mine flat on the roof and it works well enough.

● Panels can generally be 12V or 18V, which is why a charge controller is essential. Mine is an 18V 100W panel, meaning maximum (theoretical) current is 5.5A.

● The charge controller makes sure the battery gets 12V irrespective of the panel’s output voltage. There are two kinds – MPPT (maximum power point tracking) and PWM (pulse width modulation).

● MPPT controllers are more efficient and offer greater functionality but are more expensive as a result – I chose MPPT.

● Solar panels can be connected to increase either output voltage (in parallel) or current (in series).

● The plugs in the battery compartment are intended to allow another panel to connect in series in case the caravan is parked under trees, for example.

● I used 25A cable to give capacity in case I wanted to add another similar panel on the roof or a supplementary panel plugged into the battery compartment plugs.

If you’re not comfortable with either wiring or drilling holes in the outer skin of your caravan (you have to get a cable in somehow), then there are plenty of professionals who will do this job for you.

Advice given by consultants and contributors within Caravan is designed to be by way of suggestion only and does not negate a reader’s responsibility to obtain professional advice before acting upon it. Any such advice is not a recommendation on behalf of the Editor or Publisher and is followed entirely at the reader’s own risk. Consequently, the Editor, consultants and Publisher shall not be responsible for any loss or damage incurred by a reader acting upon such advice.

* Costs correct at the time of project, summer 2019