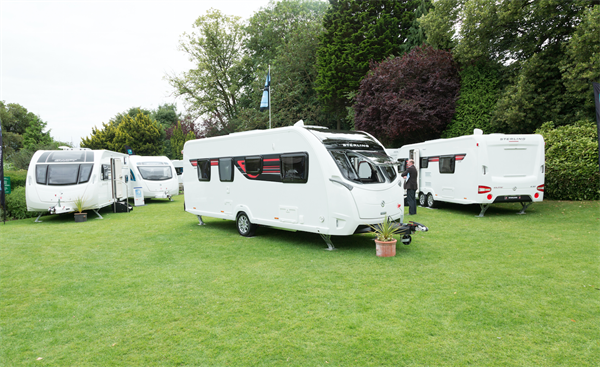 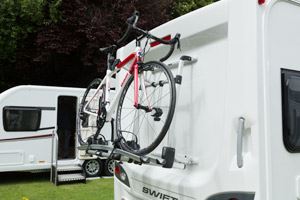 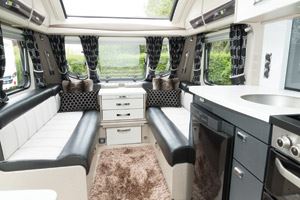 A range for caravanning newbies, new protection and high-tech heating all announced for 2016

The Swift Group has announced a low-spec Sprite Freedom range, designed to appeal to first-time buyers, for 2016. Plus a single-axle island-bed layout has been unveiled in the Conqueror and Elite ranges; a twin-axle version is due to arrive in October. Read on for the full details...

A new range of family-layout Sprite caravans, called Freedom, with lower prices and less equipment than the main Sprite range, arrives for 2016.

Swift has designed this range of three six-berth caravans for families looking to get into caravanning on a budget. They have no carpets, no ovens, no rooflights over the lounges and, instead of curtains, there are fabric panels, in continental style.

Cooking equipment is a simple three-burner hob and a grill. But they do have Swift’s SMART Plus GRP outer underfloor layer and hail-resistant roof, plus cycle rack fixing bars on the rear, in common with other Swifts.

The first model to be launched for the 2016 season is the Sprite Freedom 6 TD, with bunk beds. Two more six-berth models, the Freedom 6, also with bunks, and the Freedom FB, with a double bed and bunks to be created in the offside dining area, will arrive in October.

Sprite Freedoms have single-piece front windows. For 2016, the main Sprite range of eight models is restyled and has triple windows, in common with all other Swift caravans. 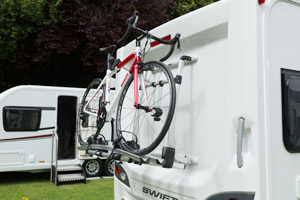 Swift has simplified its ranges going into 2016 with just Swift Challenger and Sterling Eccles; the Sport and SE variants of these ranges have been dropped.

Challenger and Eccles ranges have a new shape, with a sweeping front profile, and upgraded construction, which now features a 44mm sandwich floor construction with a core made of high-rigidity Styrofoam, a plywood upper and GRP outer skin to protect it in wet weather.

The roof has also been upgraded; it’s now made of hailstone-resistant GRP, with polystyrene insulation. The rear panels of Challenger and Eccles models have fixing bars to allow a Thule cycle rack to be fitted.

Upholstery is changed for 2016, to a foam construction called Swift Airwave. It’s designed to give the feel and comfort of a mattress topper when the upholstery is turned over to make into a bed. Fixed beds will still have Duvalay Duvalite mattresses.

Buyers of caravans in both ranges have the option to choose a stain-resistant fabric. Called SwiftShield, it has the look and feel of soft suede and is designed to be easy to clean; most stains can be wiped off with a damp cloth.

A new digital control panel for the Truma heating system is introduced. And, now, you can choose Challenger and Eccles models with Alde heating.

The gas lockers have been restyled, with wider doors and a three-point locking system. And, on Sterling models, they’re a new colour, graphite, with matching hitch cover, skirts and wheel arches. 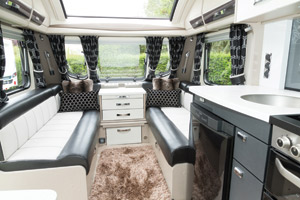 Elegance models have oyster and dusk shades, with leather on the top of the backrests and the front of the seat bases. Scatter cushions are in fur-effect fabric.

Continental models have a black and white décor theme, with black leather tops to the backrests, teamed with a silver-grey fabric for the main seating areas.

The curtains have a silver-grey honeycomb pattern on black. White locker doors have smoked oak-effect inserts, and kitchen doors are finished in matt black.

Both ranges now have systems which enable you to control and monitor the heating from your mobile phone or tablet. The system is called Swift Command.

These models now have external shower points and are supplied with AL-KO Secure wheel locks and side-lift jacks.

Sprites move up for 2016, in terms of looks, closer to Challengers, with the single-piece front window being replaced by three windows.

All lighting is now low-energy LED. And shower doors have a sliding track.

The Truma Combi heating system has a new digital control panel. And there’s a dealer-fit option to have an iNet remote-control panel, to enable you to control your heating from your mobile phone.

Two new models are announced. These are both rear island-bed layouts. One is a single-axle 560, unveiled at the Swift Group’s 2016 portfolio launch event at Willerby Manor Hotel near Hull. The other is a longer version of the same layout, on twin axles. This is the 650, to be launched at this autumn’s NEC caravan show (13-18 October). These layouts will be in both Conqueror and Elite ranges.

These ranges have wider sunroofs for 2016. And the gas bottle compartment doors now have a three-point locking system for improved security.

The change to the completely timberless Smart HT construction enables interior space to be increased. This is most noticeable in the lounges, where the front armrests no longer have to be stored elsewhere when you make up the double bed; they can be used as a headboard without reducing the length of the bed.

New, thinner kitchen worktops are designed to be scratch-resistant. Some layouts have the new, tall Slimline Dometic fridge-freezer. And all models in these two ranges now have the new Swift Command, enabling you to control heating and lighting remotely.

Developed in conjunction with Sargent Electrical Services, this new addition enables buyers to control the caravan’s heating, lighting and inboard water tank fill systems from a mobile phone or tablet.

or visit the Swift manufacturer homepage.