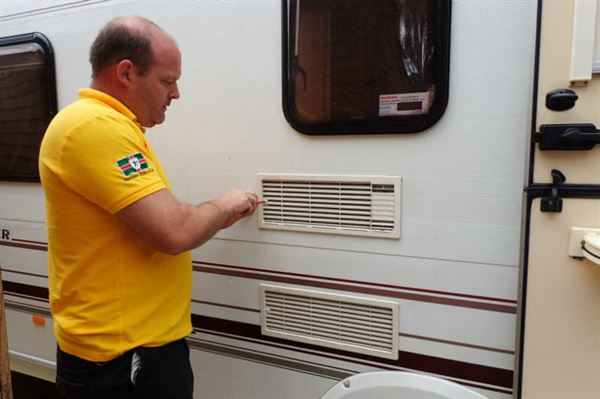 Vicky Hilliard gets a professional in to fix the fridge in her caravan.

Earlier this year on a trip, our sink piping leaked onto our fridge causing it to stop working. I thought I'd better get it sorted before we head off for two weeks to Cornwall in the summer holidays. Without a fridge to keep our milk cold we'd all be grumpy with no cup of tea first thing in the morning.

Not knowing off hand who could help with fridges I started doing some research on the web. I came across newarkcaravans.co.uk and thought I'd give them a go. The site was concise and gave me enough information to make me believe they knew what they were talking about.

After a lengthy chat with the owner, Nick, he asked me to send him some images of the fridge. The images included the information plate from the back of the fridge. This way he could come prepared for every eventuality.

Off with the vent 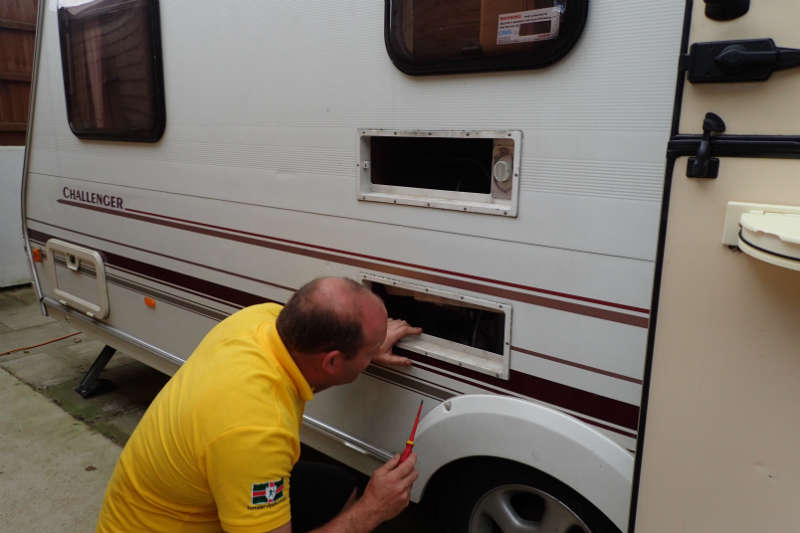 Nick, and a work-experience guy called Stuart, soon got cracking on taking the vent off the side of the caravan. Straight away he noticed that the piece of metal that room seals the unit had slipped down to block the top air vent which can cause the fridge to overheat. Nick was extremely knowledgeable about the inner workings of a fridge and I certainly felt like I was in my Physics class. 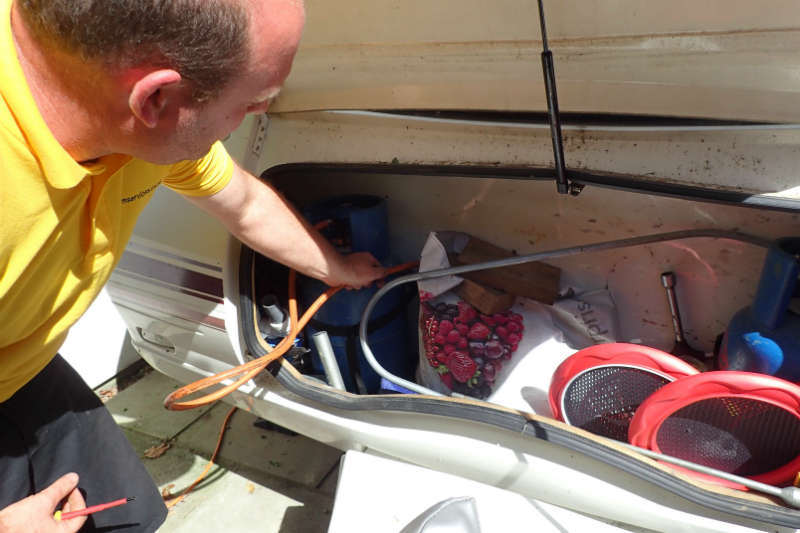 A must for Nick is to check the gas, and the supply to make sure there was no leaks - what a good job he did this. He found the supply hose from the gas was several years out-of-date. I had learnt something new, as I wasn't aware that they even had a sell by date, so it's worth keeping an eye on this as ours had a few puncture points on it.

He replaced the new hose and noted we were using butane gas (often in a blue cylinder), he explained propane gas, (often in a green cylinder) is a better as it burns cleaner than butane gas, and if you are unfortunate enough to have a leak propane is a thicker gas and it is slower at being released than butane.

He also mentioned if we use our van in the winter time butane gas stops evaporating at 8 degrees, so won't function efficiently - another little science lesson there! Nick also advised us to check the valves that attach to the gas bottles as they too can age and leak - a bit like my great grandma.

At this point, I ask about annual checks because, to me, it's a no-brainer to get your van checked out each year. In fact, I think it should be enforced so you have to get equivalent to an MOT for a car. With all that jiggling around whilst on the road it's bound to work things loose. 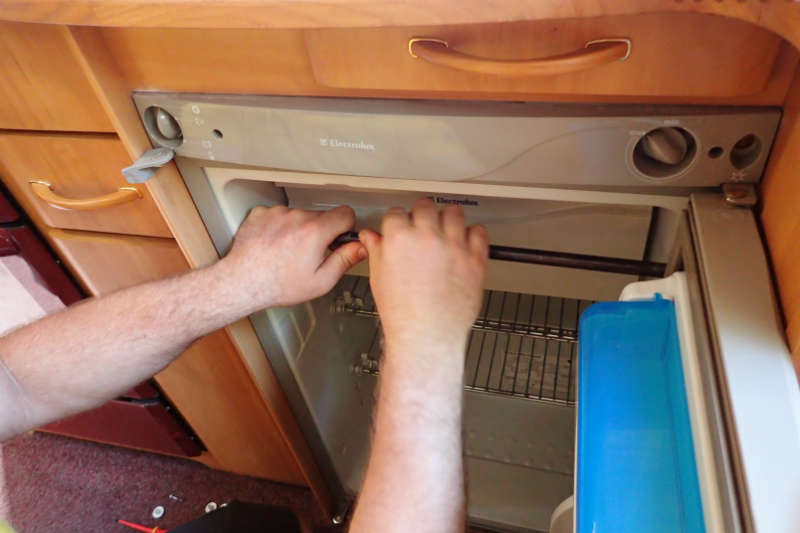 After using various gadgets Nick worked out that no power was getting to the element, and we had no gas leak prior to removing the fridge. At this point, he unscrewed the fridge and found that one screw was poorly fitted which would have meant our poor fridge was getting moved around and had damaged the wooden panel it was connected to, this Nick explained may cause gas leaks as it can pull the connecting hose to the cylinder loose.

After much heaving and wiggling Nick got the fridge out, he was in like a shot. And, with all his tools on show, it looked like he was about to operate. Nick's first thought was to test the element, and it was producing no ohms when it should be at about 430 ohms. Nick was right, the element had frazzled out. 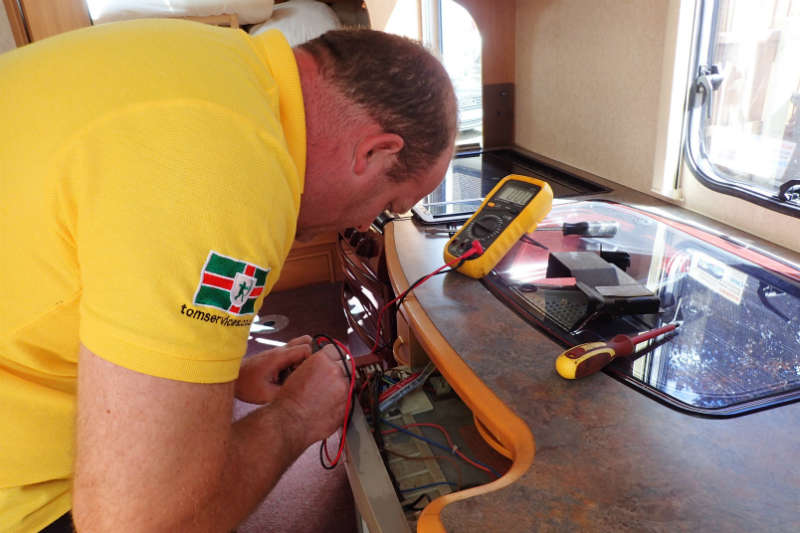 The leaking sink had dripped into the boiler jacket. That leak, combined with old age, meant it had given up the ghost! Here I was thinking that I would have to wait for him to come back with the suitable parts, when he disappeared into his Tardis of a van and came back with the correct piece to fix it there and then. In ten minutes, it was done.

He cleaned off all the old insulation foam from the top of the fridge that had slipped into the wrong place. Again, this had been blocking the ventilation grate, which had caused our fridge to overheat and overwork, which isn't good for anything or anyone. Nick swiftly popped the fridge in, and placed some new screws into the wooden cabinet, so they would hold the fridge in place this time.

Nick was so thorough he re-checked the gas and spotted a new leak which he rectified and used special tape that looked like tin foil to create a flow stream. This made sure the air would circulate back out of the top vent to keep the fridge working as efficiently as possible.

On the subject of gas, Nick can carry out a one-off gas check for £45, he supplies and installs a small fan at the back of your fridge as standard to help prolong its life, this is especially useful if you travel abroad with your caravan to any climates that exceed 35℃, because your fridge can stop working.

Give your caravan some TLC 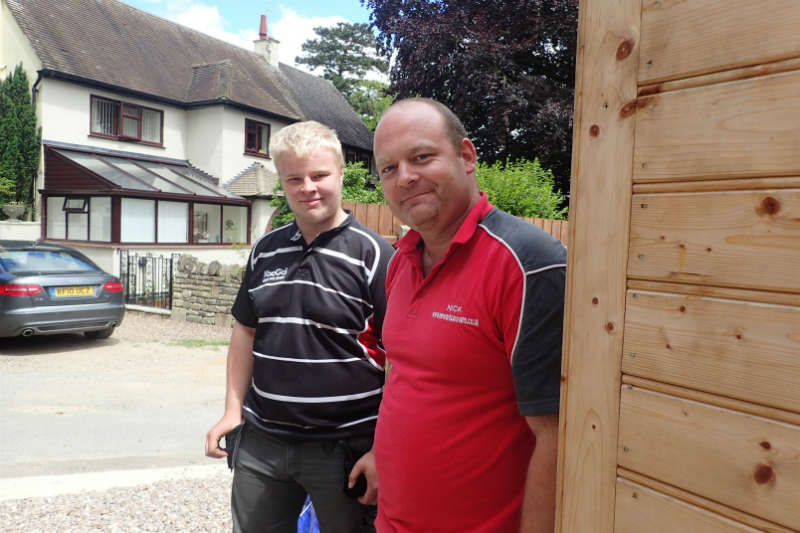 Above (l to r): Stuart and Nick

I was super-impressed by newarkcaravans.co.uk and would definitely use them again.

If your caravan requires a little TLC, or you feel like it needs a health check get in touch with Nick - one little piece of advice though - Nick is busy all year round, and when he's on a job, he's on it and won't answer his phone as all his focus is on your caravan. However, don't get me wrong here, but you may need to leave a couple of messages!