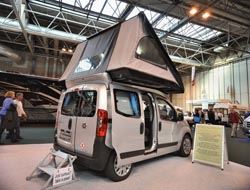 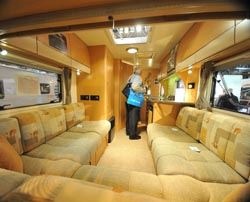 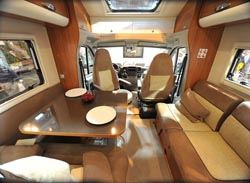 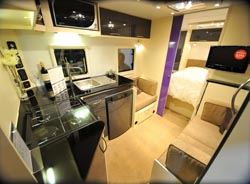 THIS year’s October NEC Show has been eagerly anticipated by both dealers and buyers alike, as the industry has strived to produce brand new designs to kick-start sales of new caravans and motorhomes.

This year’s show is slightly smaller than in previous years, largely due to the reduced presence of continental manufacturers, but that isn’t to say that there isn’t still plenty to see.

In fact many will find the L-shaped layout across the nine halls far easier to negotiate than in previous years, when it was all to find yourself disorientated when trying to make sense of the labyrinthine floor plan. Be assured, that you will still feel quite exhausted by the time you have covered the entire exhibition. 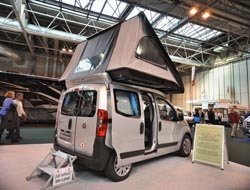 Those seeking bold new ideas will not be disappointed. For sheer verve, you just have to admire those guys at Wheelhome, who for years now have been finding ever more ingenious ways to produce motorhomes from the most unlikely base vehicles.

This year’s eye-popping innovation mates the roof tent concept with the 1.3 litre Fiat Fiorino, a compact run-about based on the Punto chassis and more commonly seen as an urban delivery vehicle, transporting flowers or pizzas.

Wheelhome have set to work on it in the way that only they can, being the first to produce an electrically operated raising roof with slide-outs, creating a roof tent that is accessible from inside the vehicle.

Other manufacturers must be kicking themselves, wondering why they hadn’t thought of it first. Of course, being Wheelhome, they didn’t stop there, adding silent electric heating under the mattress for good measure. Access is via slide-out cupboards that create convenient steps – so no awkward ladder required.

As you might expect, only basic cooking facilities are provided, but there are two tables and a Porta-Potti, which can obviously used when the beds are in place. The vehicle itself is very well equipped, with heated door mirrors and rear parking sensors.

The introductory price is £25,350 on the road, which includes delivery to your home, anywhere on the UK mainland. 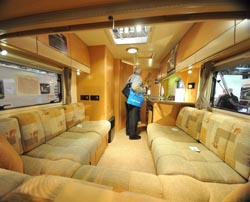 There has already been quite a buzz created around the Pegasus and it doesn’t disappoint. The 10-year water ingress warranty has been quite a talking point, but Bailey have also created a new look for the Pegasus, which is tastefully modern in a way that will appeal to long-time Bailey owners.

Seat bases are easily raised with the assistance of gas-filled struts and storage is generally well provided for. The Pegasus 462 is worth a look, having an unusually spacious washroom for a two-berth.

Adria have really gone to town this year and have also pulled off a few surprises. The Matrix is a bit of a teaser, as it won’t be available until later next year, but you are bound to be impressed with both its beautifully crafted interior design and also its attention grabbing, main feature, an A-Class style drop-down roof bed.

This is accommodated under a bulge in the roof that creates a profile somewhere between a low-profile and an overcab design, but many will find that the end result is an improvement on the traditional design.

Any problems associated with building this type of bed into a coachbuilt design is solved simply, yet still quite impressively, by attaching the high-level lockers to the underside of the bed base.

These are obviously lowered with the bed, as it is shifted into any one of its four click-stop positions. If not being used, the bed tucks almost un-noticed, tight to the roof line.

The second position allows it to be locked slightly lower, allowing you to leave it fully made up, even with quite bulky bedding in place. The third position is a kind of half-way house, allowing plenty of room for children and also keeping them safely secure with the safety nets in place.

The final position allows plenty of room for adults and requires no fiddling with the cab seats to provide the necessary clearance.

Adria’s new flagship range won the Which Motorcaravan design award and it is easy to see why. This is a true luxury motorhome with no compromises; featuring leather seats and high-gloss woodwork, it really is quite a breathtaking interpretation of one of Adria’s most popular fixed bed layouts.

The Stealth range from Dunster House is destined to become the Marmite of the caravan world. It is intended to break away from the traditional caravan concept, concentrating almost entirely on producing an ultra-modern interior layout and design, with the body shell being of a shape most suitable to accommodate it with the minimum amount of compromise.

Few can argue against the fact that interior space is maximised in an unrivalled way, but will caravan buyers be prepared to adopt the rather industrial looking body shell. One thing is for sure, you certainly won’t be able to resist having a look to see what all the fuss is about.