Did this Teardrop Caravan Come from Outer Space? 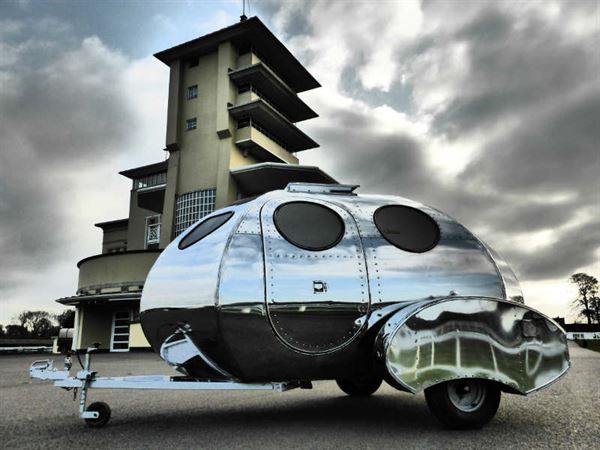 We've all been there: you see a 70-year-old sketch of a spaceship and then decide to build a teardrop caravan exactly like it in your front garden in Northamptonshire. Well, Daniel Gregory has. Get ready for some close encounters of the caravan kind…

You're looking at the only Roswell teardrop caravan in the UK.

As far as anyone knows, it's only the second one that's ever been made anywhere. It's a project that required massive dollops of talent, persistence and enthusiasm. Luckily, Daniel Gregory possesses all three.

It might look like a towing vessel for transporting alien beings around secretive facilities in Roswell, New Mexico, but Daniel's idea with the caravan was altogether more of this earth: to make a family-friendly 'van for weekends away (albeit one that looked like it had come from the set of Close Encounters).

For more than 70 years, this unique style of caravan existed only as a rough sketch based on a mythical spacecraft in the States, when space exploration was in its infancy. 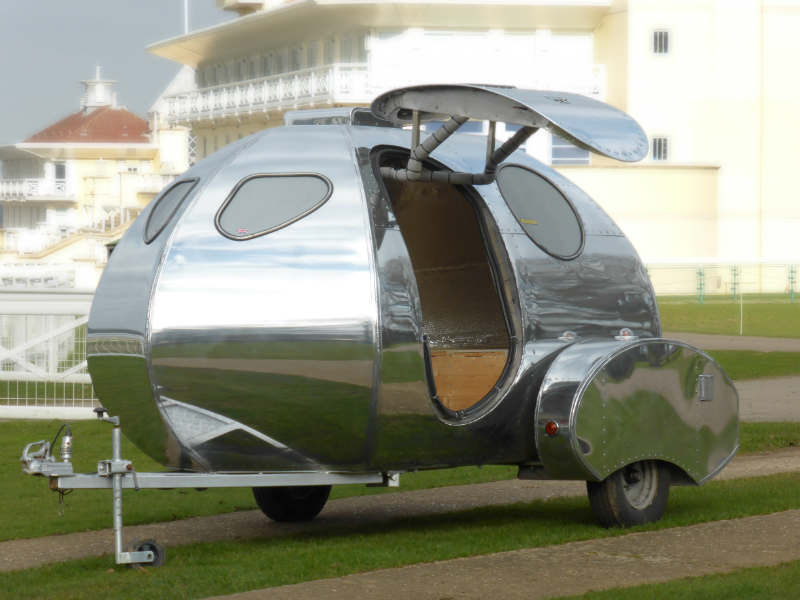 Then, a few years ago, a design engineer from Newcastle called Andrew Gibbons decided to draw a fully dimensional layout of the Roswell from that 70-year-old drawing. Andrew's aim? To see if anyone might actually take up the challenge and make it.

Daniel, a member of the Teardrops n Tiny Travel Trailers club (www.tnttt.com) in America, as well as the Teardrop Club of Great Britain, found out about the fully finished plans of this mythical machine and decided pick up the space-inspired gauntlet. Along the way he might have wished he hadn't – a sentiment possibly shared by his wife.

Taking around 250 hours of bending, shaping and welding inside his best mate's barn, this project tested Daniel's skills to the limit. Made out of sheet aluminium, it's all been rather helped by his previous career as a welder in a company making parts for oil rigs, as well as a stint as a fully-trained fabricator. 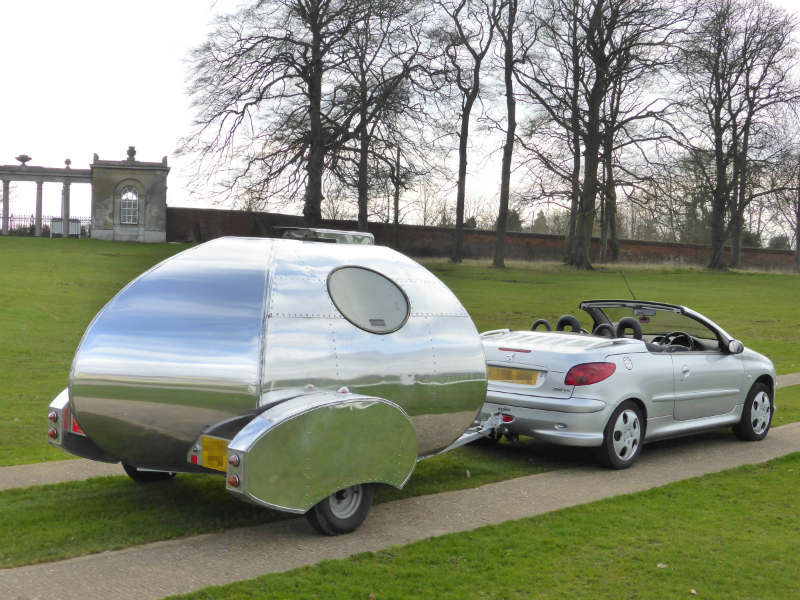 Daniel's been a train driver for the past 14 years, which as far as we know has not helped this project whatsoever, but luckily the welding talent never left him.

Daniel was working 15-hour days as the project began to take shape, with wife Jo contributing 'loads of tea and sarnies' as well as a wise decision to steer clear of the barn. A 12th scale model was even knocked up before Daniel started, to see if there were going to be any issues.

Predictably, when we asked him if he came across any problems during the full-scale build, his answer was an immediate, "Yes!" It turns out that the Perspex windows don't follow the contours of the outer aluminium skin, which Daniel aims to rectify.

He also thinks the towing weight is a bit heavy, so he may bring the wheels forward by about six inches or so. 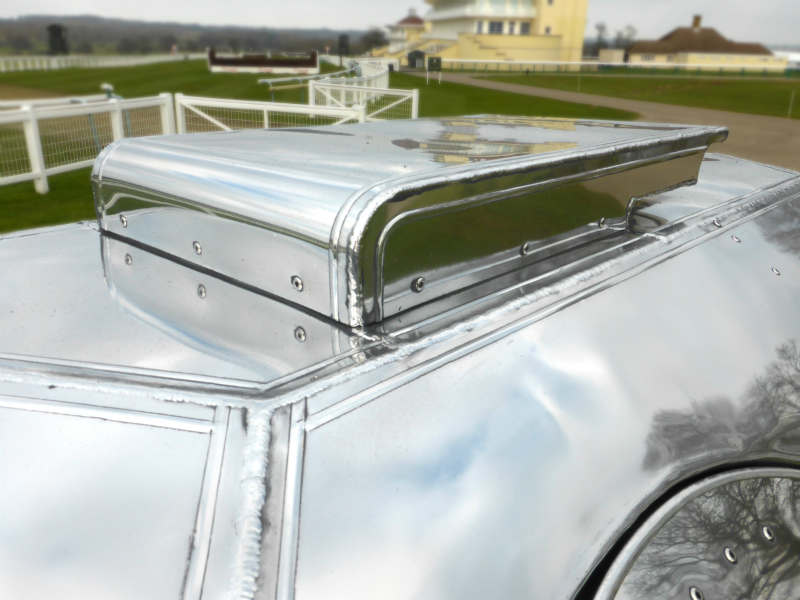 With a host of cool little touches (check out the 1950s jet indicator lights on top of the wheel arches he bought from ebay), the Roswell caravan predictably receives lots attention out on the road.

"My four-year-old daughter Victoria was doing a project at school recently called 'Space', and she asked me if I'd bring the caravan down to the school," laughs Dan. "They were so excited. I don't think they'd ever seen anything like it.

"To be honest, it even gets attention when it's just sitting on the front garden. People knock on the door all the time asking if it's for sale or where they can buy one. I've even been asked by someone in America if I'd go over there and make one for them. I'm not into that – I've got too much going on here." 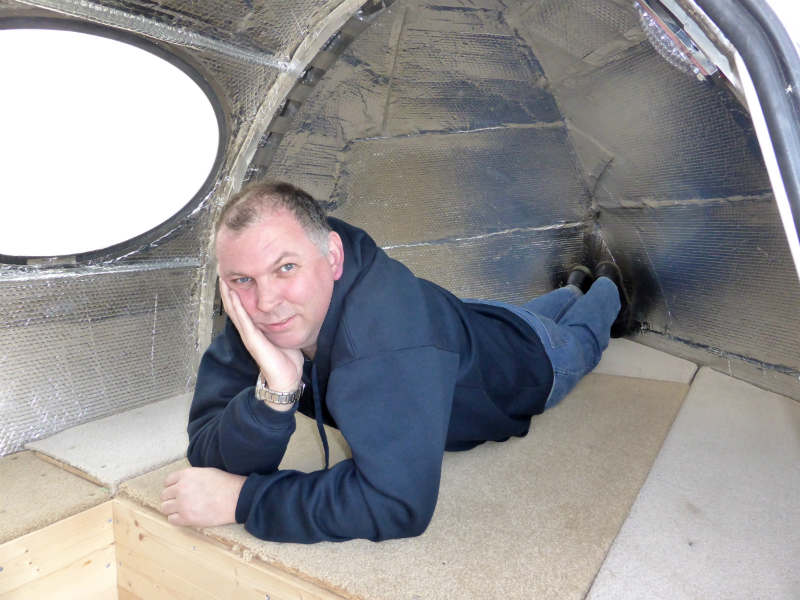 So far only Daniel has been away with the caravan ("It tows like a dream – you'd hardly know you had anything on the back"), but he's getting it ready to take Jo and Victoria away in it as well. "Space is limited and it can only take a double bed and a few under-bed lockers – I'll be sleeping under the awning!" he laughs.

That's when he's not buffing the exterior with his electric polisher. "It takes over six hours to get it looking this shiny, and the shine disappears quickly," he says.

You'd think Daniel would step back a bit and just enjoy driving trains and using the Roswell at weekends, but you'd be wrong. Not content with building a caravan from outer space, he's busy developing a diesel motorbike, as well as tarting up a 70's Raleigh Chipper and an '80s Raleigh Bomber that he bought online. Somehow he's also found time to take up taekwondo.

How he manages all this, we'll never know. Unless he's actually an extraterrestrial being, of course.