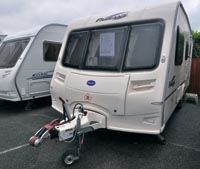 CHIPPING Sodbury Caravans is a premier Bailey dealership, in fact so close is it to the Bristol firm that Chipping Sodbury won’t charge you a delivery fee – already a great saving on a new caravan.

It was way back in 1982 when the company first took on Bailey and by 1997 they were a solus dealership. Check out their website now and you will find further savings on the new Bailey Pegasus and Olympus ranges - save up to £1,300 on the Olympus and up to £1,690 on a Pegasus. This dealership will also be one of the first dealerships to take in the new Bailey Unicorn range so look out for that.

Used tourers have proved fast sellers, with stocks being depleted rapidly as the weather improved. To back up the company’s sales, a good sized and well priced accessory shop is on site, while first class servicing is carried out to keep customers’ caravans on top form. Caravans on sale at the time of our visit included:

The Discovery was Bailey’s entry level range and ideal for first time caravanners. They are quite basic caravans, but you do get the essentials such as a heater, hot water and a fridge. You might find a few examples that the owners upgraded with the custom pack, adding flyscreens, blinds and a carpet. This Disco 100 did have those extras, making it a superior buy. It was tempting several browsers as we checked the Bailey over for ourselves; the exterior was in good shape and we checked the exterior but found no damage to either panels or trim.

This layout provides you with a large, wrap-around front lounge with free standing table. There is no full oven, only a deep grill, which might upset a few people. It has a fridge of course and storage is pretty good. The worktop is really useful and its flush-fit glass tops, looks smart for an entry-level tourer, but only three gas rings are fitted. The wardrobe would be okay for four, with decent hanging space and has a Truma (gas only) heater in its base.

The adjoining washroom comes with swivel manual cassette loo and shower - not very large though and we reckon it’s more of a case for emergencies than daily use. However, as with the rest of the Disco it was in good condition. The rear end single dinette is ideal for young children and in the evening it makes into single bunks. Only the small rear window makes this area a tad gloomy, but even so, these caravans always find buyers quite quickly.

I know it’s only twelve months old, but this Pageant was one of those tourers that you look at and wonder if it has been used at all. In fact I had to double check to make sure it actually had a previous owner. The Monarch is a great tourer for two, with its end washroom being impressively large and practical. The cupboard storage is excellent and the front lounge impressive. Twin singles or a massive double bed can be used here and you also get a central chest of drawers.

Seating is very smart and comfortable and roof locker storage is brilliant too. My only regret was that no access flaps were fitted under the seat bases, which was a bit of a shame. The side kitchen comes with a Dometic fridge and this time a full oven is fitted. A microwave is also part of the spec but is fitted opposite, above the large side dresser. The Pageant feels very spacious, no doubt helped by the 7ft 4in width.

The rear end washroom comes with an electric flush loo and a real walk-in shower cubicle. The wardrobe in here offers plenty of storage and also a fair bit of floor space, making it a useful changing room too.

The Ranger Series 5 was a spectacular sales success - these tourers sold just for the fun of it! Lightweight and good value, the Ranger proved a top seller for several years with limited changes. The 510/4 is the family end washroom model which offers a decent sized washroom with a proper walk-in shower. The dark wood was at the time very much in vogue, and the angled roof lockers gave storage with some decent depth to it.

The front lounge is bright and airy with some very useful corner shelves in addition to the roof lockers. Seating is a little lacklustre and after a few years of usage tends to lose its support. This example here had lost a little but not enough to worry about. The side single dinette came with the usual bunk above it, which is ideal for younger children. Opposite, the kitchen offers a great worktop, plus a fridge, a full oven and the storage is good too.

The rear end washroom is well above average, with a decent shower area, a great wardrobe and storage below the hand basin. 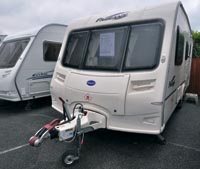 The Pageant Series 5 was and still is a great used buy. There are plenty around but don’t expect to pick one up cheap. The Moselle was the end washroom four berth with L shaped front lounge. Exterior of the Pageant was in good condition and the Bailey came with a mover as well so all was looking well. Would the interior be as good?

Inside, the Moselle is light and airy, helped by the large roof vent. Light furniture and deep windows allow even more light into the Pageant. The front lounge is spacious, although the seating had become rather lifeless. Lighting is from four spot lamps, two corner mains lights and a halogen ceiling lamp. The roof lockers have space above them that you can use as well.

The side kitchen is superb with acres of worktop, a full oven, an Omnivent extractor and a fridge, but no microwave. Some may find the kitchen set a little high though, but twin spots for concentrated lighting are a definite plus.