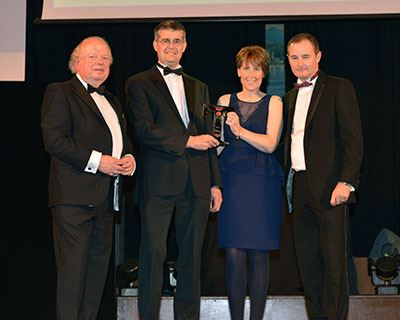 Number one campsite in Lancashire is a Premier Park for 2015

Holgates Bay View Caravan Park, Bolton-le-Sands, recently added as a Premier Park for 2015, has taken top spot in the Holiday Park/Holiday Village 2014 category, in the annual Marketing Lancashire Tourism Awards. This is the second successive year the Bolton-le-Sands holiday park has taken the number one spot.

Over 600 people gathered in The Blackpool Tower Ballroom to celebrate tourism excellence in the county and to mark the 120th anniversary of Blackpool Tower. On the evening, the glittering dinner and awards ceremony, was presented by journalist and broadcaster, John Sergeant, who presented 20 of the county’s finest tourism businesses and a Tourism Superstar with their awards. The winners of which now have the opportunity to go on and represent Lancashire in the national Visit England Awards for Excellence 2015.

Michael Holgate said: ‘’Winning a Lancashire Tourism Award for the second year in a row has given the team at Bay View a great lift. Which, alongside winning Cumbria Tourism’s Award for our sister park at Silverdale, has created something of a dilemma, especially as two of our parks will now be up against each other representing Lancashire and Cumbria in the VisitEngland National Excellence Awards 2015.’’

For more top quality parks, have a look at the latest Premier Parks collection.