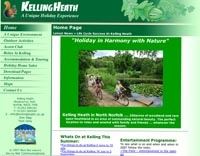 FORMER tourism minister Shaun Woodward MP took time out to visit a North Norfolk holiday park in May and praised as “amazing” its efforts to help holidaymakers value the environment.

The minister, who is now Secretary of State for Northern Ireland under Gordon Brown's leadership, was at Kelling Heath Holiday Park, Weybourne, Norfolk, to discover how parks across the UK are playing a major role in protecting the natural world.

Helping to explain the initiatives were park director Michael Timewell, the Director General of the British Holiday and Home Parks Association, Ros Pritchard, and BHHPA con-servation adviser Rufus Bellamy, son of David Bellamy and a wildlife film-maker and author in his own right.

During his visit, Mr Woodward was taken on a tour of the 250-acre park, set amid woodland and rare open heathland, and home to many different animals, birds and plants.

It has won a number of prestigious national and international awards for its environmental work, including the David Bellamy Gold Conservation Award.

“What you have done here is amazing, and you are setting a real benchmark for the tourism industry as a whole,” the minister said.

Mr Woodward was told that Kelling Heath has for many years committed time and resources to protecting its natural assets, and helping educate adults and children about the natural world.

The park is working towards becoming carbon neutral, and may be one of the first UK parks to achieve this goal. The park is also a successful part of the national red squirrel breeding program.

The minister also saw the wildflower meadow established by the park, which attracts a wide range of butterflies, including rare species. Elsewhere on the park, miles of specially laid-out nature trails, supported by interpretation leaflets, encourage visitors to make their own wildlife discoveries.

During his visit, Mr Woodward heard how holiday parks such as Kelling Heath account for 89 million UK holiday bed-nights every year, around one in five of the national total. He also heard how they make a huge contribution to rural economies and employment by producing an annual tourism spend of £2.9bn.

Facilities at Kelling Heath include three restaurants, a health and fitness club complete with a pool, sauna, steam room and gym, tennis courts, adventure playground areas, and a regular programme of talks, demonstrations and tours with a wildlife theme.