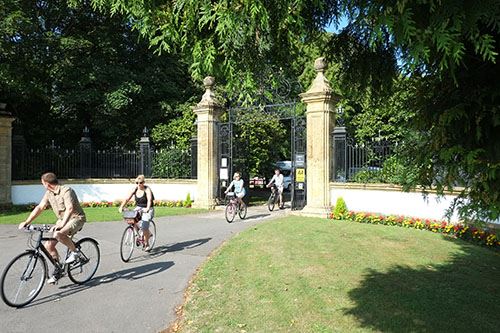 
The owners of a secluded Poole holiday park are celebrating after their business was named Dorset Holiday Park of Year at the Dorset Tourism Awards in October. Joanne and David Bridgen of South Lytchett Manor Caravan and Camping park stepped up to receive their accolade at a glittering awards ceremony at The Tank Museum in Bovington.

The husband-and-wife team beat scores of parks across the county to take the top gold award for their 150-pitch touring park, set in the former grounds of an historic country manor house.

Their success means the park will now be fast-tracked into the South West Tourism Excellence Awards in February 2015 – and possibly then onto the national finals later in the year.

Joanne said that the Dorset Holiday Park of the Year prize had a special resonance for her and David because of the judging criteria. "We knew that we were being assessed not just on the quality of the surroundings, but also the standard of service and hospitality which guests receive," she said.

South Lytchett Manor is set in 20 acres of parkland, full of mature plants and trees. There are deluxe pitches and hard standing areas for motorhomes with electric hook ups, TV connections and chemical and motorhome disposal points.

Discover more about the South Lytchett Manor park or get the latest lifestyle news for motorhome owners at outandaboutlive.co.uk.