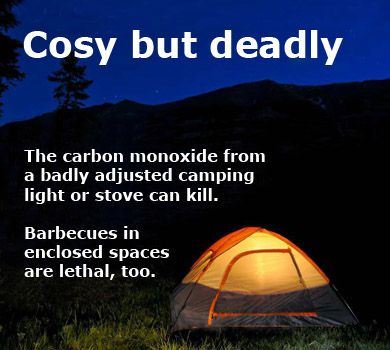 A coroner has warned of the dangers of carbon monoxide poisoning after the "tragic" death of a camper in the Lake District.

Christopher Bainbridge, 45, from Darlington, County Durham, died in a pod at a campsite in Ullswater in March.

He was found slumped in on a chair in the pod at the Quiet Site alongside a barbecue. His wife Jane was unconscious on a floor. She was taken to Cumberland Infirmary, Carlisle, where she was in a coma for several weeks.

Quiet Site proprietor Daniel Holder who found the couple and the barbecue inside the pod told an inquest in Kendal that the industry had woken up to the dangers of barbecue inside pods and tents.

Carbon monoxide detectors have been fitted in the pods and there are electric heaters. Ventilation is through the double doors at the front and a small window at the back, which can be opened.

Coroner Ian Smith said there was no blame attached to the campsite.

He said: "This was a terrible, tragic, horrible accident. This couple had come to the Lake District as a weekend away, rented a no-frills pod and intended to cook their own food.

"At some point the barbecue was moved inside. It can only have been Mr or Mrs Bainbridge who were also inside. The result was appalling in that there was a build-up of carbon monoxide over a very long period of time."

The coroner said there should be a campaign warning everyone, including householders as there is with smoke detectors, "of the potentially fatal danger of carbon monoxide poisoning."