Camping magazine goes under the canvas for TV show 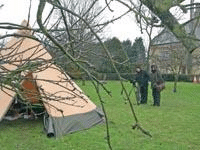 A TV programme on the histroy of camping - filmed with the help of Camping magazine editor Clive Garrett - will be shown on BB2 on Sunday (August 8) at 10pm.

Originally shown on BBC4 recently, Britain Goes Camping is a history of tent camping that features the evocative memories and unseen archive of generations of enthusiasts, and the intriguing story of how sleeping under canvas evolved from a leisure activity for a handful of adventurous Edwardian gents to the quintessentially British family pastime that it is today.

The programme is narrated by Alison Steadman and directed by Brian Henry Martin, who also made BBC 4’s Caravans - A British love affair.

Camping magazine editor Clive Garrett was filmed for the show - spending six hours in a Tentipi Safir 9, buffeted by gale force winds and rain while extolling the delights of tent camping and its history.

He said: “As campers, we’re always looking forward to the next big adventure under canvas. But sometimes it is good to celebrate the past, and we should never lose sight of the fact that the UK’s early camping pioneers had a worldwide influence on our pastime that we still benefit from today.

“I am honoured to have been asked to contribute to Britain Goes Camping, and as a celebration of tent camping it was the icing on the cake of our own magazine’s 50th birthday party.”

Find out more about Camping magazine by clicking here.