Walking and cycling in the North York Moors 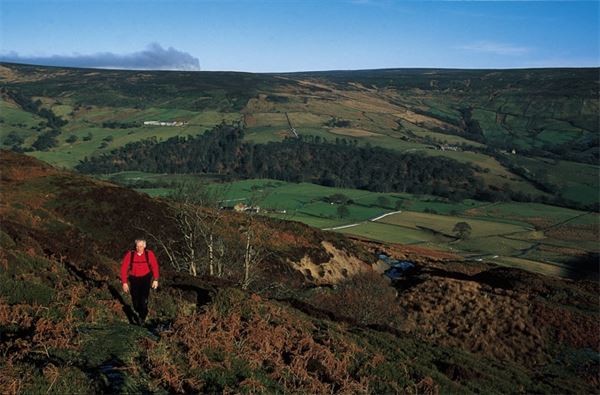 WELCOME to my back garden. Don’t worry, it’s plenty big enough for all of us and, technically, it isn’t really mine. But I am lucky enough to live on the edge of it and look on it with a possessive eye.

My garden is the North York Moors national park, a chunk of land shaped a bit like a squashed Australia but planted in the north east of England. It’s less visited than the Yorkshire Dales to the west or the Peak District to the south, but is home to some of England’s best walking and cycling.

The park, which was formed in 1952, covers an area of nearly 550 square miles (1425 square kilometres). It has more than 1430 miles (2300km) of footpaths and bridleways, and benefits from the new access legislation, allowing the freedom to roam over moors and common land.

It also has the largest expanse of heather moorland in England and Wales. While the heather is famously purple in summer, in autumn it combines with the pervasive bracken to make the hillsides glow orange. At the same time, the woodland turns to gold and larch trees within the forestry become a wonderful shade of tangerine. The coast loses its heat haze so that colours become crisper: the sharp blue of the sea, bright white of fishing boats, deep black of water-slicked rocks.

At this time of year, the sunseeking visitors abandon the coastline, with its crumbly cliffs, long sweeps of sand, and stone villages crammed into coves. This is the real Jurassic Park – one of the richest fossilgrounds in Britain can be found between Whitby and Boggle Hole, south of Robin Hood’s Bay. Autumn, when the bucket and spade brigades move out, is the time to fossick for fossils, walk the Cleveland Way or make day hikes along the cliffs and beaches between coastal villages. Walkers and cyclists alike can enjoy the old coastal railway line that has become a dedicated cycle path, between Scarborough and Whitby.

There are disused railways inland, too. Cyclists can ride for miles over the high heartland at Rosedale, following the route that, from 1861 to 1929, trundled iron ore out of the valleys to feed the industry to the north. A combination of bridleways and permissive paths on the disused railway line allow mountain bikes or sturdy hybrids to ride from the postcard-perfect village of Rosedale Abbey, across the moor top to Bloworth Crossing and the Ingleby Incline.

While cyclists ride the old railways under their own power, walkers can build up a head of steam on the North Yorkshire Moors Railway. The country’s favourite steam railway, it chunters from the 19th century station at Pickering, through the moors to Grosmont. Its most famous stop is at Goathland, known as Aidensfield on TV’s ‘Heartbeat’ and Hogsmeade, haunt of Harry Potter. But it’s also the launch pad for superb walks, either across the moor and along the Roman Road on Wheeldale Moor, through woodland to visit the effervescent waterfall of Mallyan Spout, or on the Rail Trail to pick up the steam train at a different stop.

Although Harry Potter and Heartbeat are the fictional headliners, North Yorkshire is probably most proud of its real seafaring son. Captain Cook left a web of connections across the country from his schooldays at Great Ayton to his apprenticeship at Whitby. The Captain Cook Tourism Association (captaincook.org. uk) has done a mighty job in coordinating the historical links, including creating the Cook Boyhood Walk, a circular route taking in the Captain Cook monument on Easby Moor and the viewpoint of Roseberry Topping.

In addition to waymarked theme walks, the park offers plenty of scope for guided walks. It’s worth visiting the Moors Centre at Danby and Sutton Bank National Park Centre for ideas and programmes; their excellent cafes and bookshops are also attractions. From the Danby Lodge centre you can access Danby High Moor, walking on tracks that date back six millennia, passing ancient field systems, standing stones and burial mounds. From the Sutton Bank centre, bridleways lead onto the Cleveland Way and Hambleton Street, an important 18th century drovers’ road from Scotland to the cattle markets in England.

Cattle haven’t walked these roads for decades, but today it is possible to find llamas roaming the moors. From their base near the coast, Wellington Lodge llamas will carry your food and luggage, while you walk alongside (llamatreks. co.uk). As well as being great fun, walking with a llama breathing down your neck or fluttering his eyelashes as he peers into your face, gives a new twist to hiking. Day treks, three-day treks and special interest tours range from the nearby coast to moorland.

Where llamas now walk, monks once marched… Walkers and cyclists alike can discover the old stone pannier tracks that criss-cross the moors, left over from the days when monks trod the high plateaux, moving between their abbeys, farms and the coast. Walking over these is an easier proposition than riding them: the pannier tracks were laid over areas of wetland and pedalling between the stone slabs is harder work than it sounds.

Moorland crosses abound, many on footpaths and bridleways. Some are tall and intact, like the glorious Young Ralph on Blakey Ridge above Rosedale, emblem of the national park. Others are quirky, like squat little Fat Betty, and elegant Malo near Saltersgate. And still more are just chunks of stone halfburied in the heather, lettering worn smooth, the arms that form the crosses long gone.

If walking or riding a mountain bike cross-country sounds too strenuous, the moors can offer two very different options for families, both well suited to autumnal hiking and biking. The Scarborough to Whitby railway hasn’t seen a train since 1965; today, it’s a gently graded route for walkers and cyclists with a high point at Ravenscar. The hotel here was reputed to have been visited by King George III, where he was treated for madness and melancholia. Before royalty came the Romans, who built a signal station on the cliffs to relay warnings of invaders to their military bases inland.

Another gem for cyclists is Dalby Bike Park. Creation of England’s most extensive network of purpose-built and sustainable mountain bike trails is underway in Dalby Forest, between Pickering and Scarborough. The 8600-acre wood will be home to more than 50km of new routes, waymarked and catering to different ability levels. Already a popular destination for local riders, Dalby is set to put the North York Moors firmly on the mountain biking map.