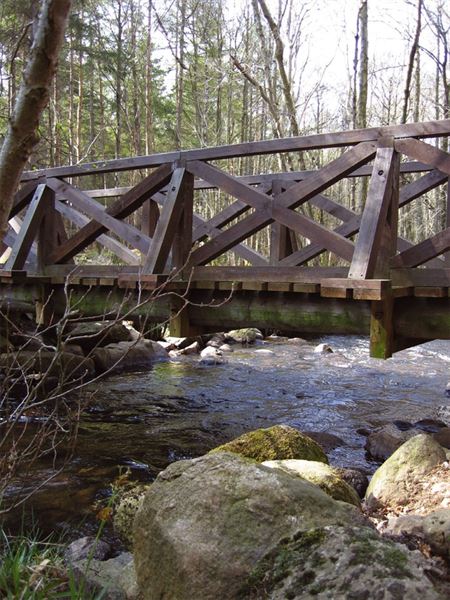 
CRATHES Castle once boasted its own railway station along the Royal Deeside Railway line. Originally a private stop, it became public in 1863 – much to the dismay of the laird! The tracks remain and an historic railcar which took the late Queen Mother to Aberdeen in 1958 was recently returned to the site. There are plans afoot to get it up and running before the year is out. This gentle walk takes you on a pleasant woodland trail finishing up at Crathes Castle and grounds.

The walk begins at the red and blue waymarker next to the adventure playground near the car park. After 50 yards turn left, then right into woodlands of sycamore, birch and beech. Bear right at the next waymarker and follow this path until you turn right at the T-junction. At the fork ahead, bear left. The track is now becoming narrower and rougher underfoot. Continue along the edge of the woods past tall larches and open farmland on your right. At the next waymarker turn left and soon you will reach the Coy Burn.

This clear little stream is a tributary to the River Dee and runs through the heart of the castle estate. Brown trout, salmon and minnows live in its waters and dippers, wagtails and wrens make their homes along its lush banks.Continue along to where a set of steps takes you down into a picturesque little glen of wetland, complete with a boardwalk that winds its way to the other side.

Re-enter the woods where the burn is suddenly picking up speed and then cross the bridge on your left. You may soon notice a number of enclosures which we mistook for some kind of pheasant traps. In fact they have been constructed to aid the natural regeneration of native conifers and keep out hungry rabbits and deer.

By the next bridge turn left and from now on follow the red waymarker along the Coy Burn. Another boardwalk lies ahead; this one has been extended in 2000 by staff from BP. Local oil companies pride themselves on getting involved with community projects. Apart from actively improving the environment these also work well as staff team-building exercises.

Follow the path uphill to a fork by a towering redwood tree. Bear right and continue down to the artificial lake, lined with colourful rhododendron in early summer.

Carry on, soon crossing the bridge by a weir. Pass the gnarled yew tree and continue until the waymarker points left up the embankment. Cross the road and follow this track straight ahead until you reach a junction at the edge of Scots pine woods by an embankment, lined with silver birches. Here you have two options: either follow the red waymarker down the steps into a small glen, turning right and shortly ascending the embankment again, where you re-join the wide track. Or simply turn right and walk along the wide track. If you turn towards the main road at the spot where the embankment path joins up you can see the two old railway carriages ahead, now the Royal Deeside Railway Visitor Centre.

Not many people know about the special royal despatch trains called the ‘Queen’s messengers’ - the only trains allowed to run on a Sunday. It is said that they were very colourful, with engines painted in tartan, and their coaches purple and gold with the royal signature on the side.

Continue through woodlands and past fields until you reach the T-junction by the castle road. Turn left here. Listen out for the drumming sound of woodpeckers, often heard but rarely seen. Follow the track through woodlands of broadleaved trees. Pass the Burnett family cemetery and at the next waymarker turn right up a slope which takes you directly into the castle grounds and eventually to the car park beyond.