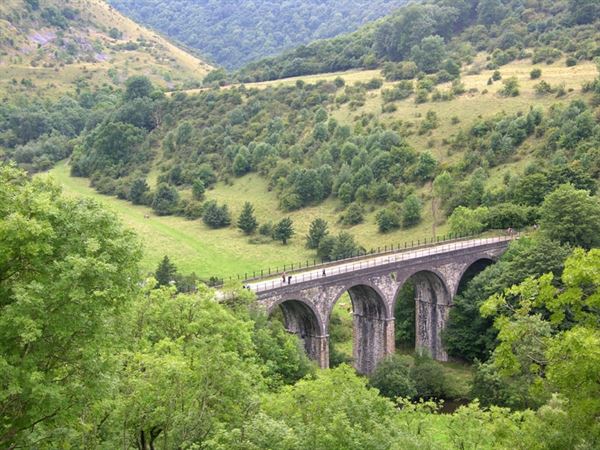 MONSAL Head had been a beauty spot for centuries before the Midland Railway built its line, complete with massive viaduct, across the valley.

The viaduct was condemned by all, including John Ruskin, as a terrible eyesore and famous people wrote to their MPs to complain. Now the railway has gone leaving just the viaduct behind.

Times change, industrial heritage is all the rage, and now the viaduct is the highlight of the view from Monsal Head - imagine the outcry if anyone tried to demolish the viaduct!

This walk starts at a car park on the A6 lower down Monsal Dale. After walking along the valley floor, a steep climbs takes you to Monsal Head, a glorious view and a timely pub.

The next part of the walk takes the line of the railway over the viaduct and higher up the valley before doubling back and up a lane on to the tops of the hills on the way back to the car park.

Start at the car park on the A6, two miles west of Ashford in the Water.

The parking area has a toilet and a picnic area. Cross the main road carefully and continue through a gap in the stone wall on the other side.

A well-worn path takes you down to the trees covering the valley bottom. Continue along beside the River Wye as it meanders through Monsal Dale.

After a mile, cross the river on a bridge and turn left on a path rising steadily through the trees until the top at Monsal Head is reached.

A café, pub and usually an ice cream van reward you for the effort on the climb. The other reward is the view over the valley as it takes a sharp left turn below you.

All that remains of the Midland Railway is a flat track through the beautiful scenery of the Peak District.

Much of this has been converted into walking and cycling routes, although the frequent tunnels have not been maintained and are closed up, requiring many deviations from the original rail route.

After refreshments at Monsal Head return to the path you came up but, this time, take the route to the right leading down to the viaduct.

Cross the viaduct and continue on the old rail track until you reach one of the blocked up tunnels. Take the footpath to the right which zigzags down to the weir beside the mill at Cressbrook.

The mill here is being converted into flats. Come out onto the road and turn right, back up the valley.

At the hamlet of Upperdale, cross the river on the bridge and continue on the lane under the railway track where you have just walked and up on to the tops of the hills.

Enjoy the views from the hill tops across the valley to Fin Cop. After the track becomes a path turn left onto a track leading to the farm at Brushfield Hough.

Bear right at the farm and follow the path down into the dale and continue back to the car park, taking great care when crossing the main road.