From colliery to caravans 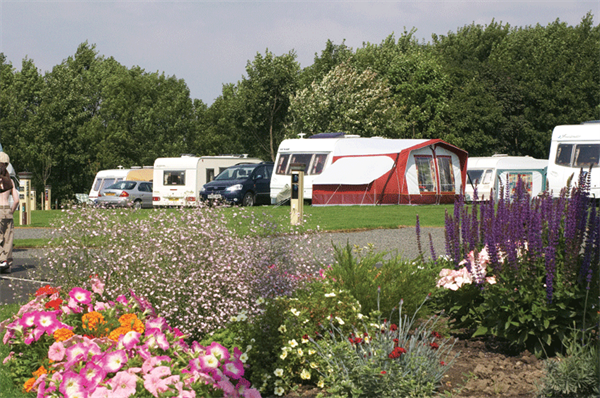 The Caravan Club’s northern flagship site has its roots deep in the economic traditions of its region: It is built on the site of a colliery. The mine shafts still exist far below the site – though of course they’ve been securely capped now.

Grange Colliery closed in the early 1970s with the loss of all jobs – a familiar sad story that’s part of the economic tapestry of the north east of England.

But while mining’s economic catastrophe is indelibly etched upon this area, there is the beginning of a new economic emphasis – on tourism.

Investment in tourism is now a key economic driver along the north east coast. And one organisation which has pumped over £1m into that campaign is the Caravan Club. Such was the level of investment at The Grange, just off the A1 and three miles from the city centre.

The Grange has been a caravan site since shortly after the mine closed; in the 1970s caravan site standards were generally lower and less competitive – the high standards we now accept as the norm just had not evolved. And, judging by the facts I learned at The Grange, this site had not kept pace with the times. In fact Caravan Club vice-chairman Grenville Chamberlain described it as dilapidated, a victim of lack of investment. Grenville explained the reasons to Out&About:

“The Caravan Club bought the site two years ago. We had administered it on behalf of Durham City Council for more than 20 years. It was in a dreadful state. Little money could be spent on it because there was no long-term agreement between the club and the council.

“The club purchased the freehold of the 12 acres for £412,500. We managed to get planning permission for the changes fairly easily, given the difficulties often encountered with planning and caravan sites.”

The transformation began in October 2004. The club pursued a policy of re-using as much material as possible. A tourer storage area at one side of the site is built on foundations of spoils from the colliery. All the rooftiles on the toilet block were re-used from the original construction.
Result: A prestige 75-pitch all-year site with 39 hardstandings and a 120-pitch storage area protected by CCTV and a high metal fence.

“This is now one of our premier sites in the North of England – a genuine holiday site created from what was at best a night halt and in fact rather a dump!”

The club’s investment in this site is viewed by north east tourism leaders as welcome assistance in a current and relatively new strategy of more aggressive tourism marketing of the region. John Holmes, director of regeneration and tourism fro the One NorthEast organization, who cut the symbolic tape and the celebration cake at The Grange’s opening ceremony, said tourism was now regarded as a key economic driver in the region. A recent tourism business survey had shown that caravan tourism had increased compared to the same period last year.

“Visitors are continually looking for higher standard of accommodation and I am sure the facilities on offer at this site will encourage more people to extend their stay in north east England,” he said.

You can shortly hop on a park-and-ride bus which will be operating within walking distance of the site, making this a top site for motorhome owners, in particular. Or you could walk the three miles into the city. Taking a car into Durham isn’t a problem, though – we checked out two car parks on the outskirts, both of which are suitable for motorhomes.

By car you can get closer – much closer, as I discovered when I went into the city to see the cathedral and castle; with little time to spare before that ceremonial ribbon was due to be cut at the Grange, I had to drive as near as I could. And – a surprise: a conversation when I stopped to crack open a fiver for car park purposes revealed I could drive through the narrow character-filled (and pedestrian-filled) cobbled streets right up to the castle, cathedral and university library. Parking costs £5 here – and then you pay £2 into a barrier-coin-slot on exit from the cobbled-street labyrinth. Worth it, in the time-frame instance of my visit. But take care – these little streets are a challenge for a wide car amid pedestrians who take ownership of every cobble!

To search for your perfect campsite from our large database simply click here: www.outandaboutlive.co.uk/pitchfinder/