This feature was written prior to the coronavirus pandemic. We are publishing it for your enjoyment and to help you plan your future trips. Readers most follow the latest government advice before leaving their homes. Consult www.gov.uk/coronavirus

As I climbed the cobbled streets of Rye, each of the weatherboard and red brick houses packed with character, I was excited to finally explore the town that had captured my imagination years ago through the children’s novels of Malcolm Saville.

At Rye Castle I looked over Romney Marsh towards the distant sea that shimmered in the sunshine, almost disappointed there was no fog for criminals to lurk in and be thwarted by dastardly kids!

Before I grew up and could travel, I escaped to new places with my head in a book and Malcolm Saville’s stories were packed with vivid descriptions of the landscape.

The Gay Dolphin Adventure, based around Rye’s fictitious Gay Dolphin Inn, includes lyrical portrayals of Rye and Romney Marsh where land has been reclaimed from the sea and ports are marooned on small hills. Add to this a hunt for hidden treasure and a gang of crooks and you have a great book. A visit to Rye has long been on my wish list…

It is quite a trek to East Sussex from Salford so we broke our journey in Henley-on-Thames, a place I knew from Three Men in a Boat by Jerome K Jerome and Kenneth Grahame’s The Wind in the Willows. The sun was promising to emerge from a misty morning and gift us a perfect day to explore the Thames.

Taking the train the short distance to Shiplake, we picked up the Thames path back towards Henley. Spotting swans I remembered that, in Three Men In A Boat, Shiplake is where Harris told his friends he had taken on a flock of ferocious swans and got the better of them!

We also saw Canada and Egyptian geese, red kites overhead and colourful parakeets in the trees. I pointed out a Thames skiff with a canvas cover that was straight out of Jerome’s book and swift rowing boats slid through the still water.

Spring felt a possibility as we climbed through woodland with woodpeckers hammering and red kites nest building. In Hambleden, a picture-postcard hamlet that has featured in many films including Chitty Chitty Bang Bang, we had a local beer in the pub before heading back to Henley.

Not far from the eye-catching temple that marks the start of the regatta course I caught a glimpse of Fawley Court, which may have been the inspiration for Toad Hall in The Wind in the Willows.

Reaching Sussex, Lewes is a town packed with personality: narrow streets with quirky buildings leading up to the castle. It is also home to the medieval house that Anne of Cleves, the fourth wife of Henry VIII, was given as part of her divorce settlement. Henry VIII’s story isn’t fiction – but it does read like a bestseller.

I travelled back to the 15th century as I entered the bedroom at Anne of Cleves House. Subdued light filtered through leaded windows, the wooden floor creaked and the roof joists jostled for position above the four-poster bed.

The Tudor kitchen is also evocative of the era, dominated by a wood-fired range with rustic bowls and green bottles lining deep window sills. We had parked next to the enchanting Southover Grange Gardens, which gave us chance to relax in this well-kept and popular walled park before having a look at the ruins of Lewes Priory.

We stocked up on local cheeses and beer at an excellent farm shop next to our Eastbourne campsite before taking the bus into town. I had some preconceived ideas about Eastbourne (none of them positive) but, in the continuing sunshine, we strolled along the pleasant seafront as waves lapped the shingle beach and the pier clock chimed; all refreshingly lovely.

The horror of watching Chitty Chitty Bang Bang plummet from Beachy Head in the film has stayed with me and anyone with an active imagination will steer clear of the edge of the 530ft-high cliffs. Having our picnic at a suitable distance from Beachy Head’s sheer chalk crags I was mesmerised by the striped lighthouse in the waves below. We returned on grassy paths lined with flint walls and yellow-flowering gorse and didn’t meet another soul. We finished our delightful day with ice creams as the sun was setting.

Rye’s small castle tells a first-rate story about sinister smugglers, changing coastline and sickening sanctions. It is no wonder Rye has inspired so many writers. Malcolm Saville wasn’t the only author to share this special place with readers. Monica Edwards, fondly remembered for her Romney Marsh children’s stories and John Ryan, who created the Captain Pugwash comic strips and cartoons packed with ‘jumping jellyfish’ and ‘shuddering sharks’, both called this home.

We climbed the church tower to look over red-tiled rooftops to Romney Marsh and land-locked Camber Castle and with Dungeness nuclear power station just visible in the haze. Exploring the streets, I found Lamb House where the writer, Henry James, lived and, later, EF Benson (writer of the 1920s and 1930s Mapp and Lucia novels).

Rye’s prettiest spot is Mermaid Street, a steep cobbled street with the attractive timber-framed fifteenth century Mermaid Inn. Houses display unusual workaday names like The House Opposite and The House With Two Doors. Packed with interesting independent shops and charming buildings, Rye is impossible not to like.

Nearby Winchelsea was once walled and two gates survive on its gridiron of streets. We searched out blue plaques remembering former residents and found the grave of the comedian and writer, Spike Milligan, with its well-known inscription in Irish Gaelic of ‘I told you I was ill’, making us smile even after his death.

Wanting to make the most of a sunny evening we stopped at Bewl Water, a reservoir tucked into the High Weald, to enjoy a brew with a view. The open grassland, heather and tall pine trees of Ashdown Forest are straight out of a Winnie the Pooh story for a reason. This is the landscape that inspired AA Milne’s charming stories.

We followed in the footsteps of Christopher Robin, Pooh and friends, enchanted by the views and birdsong, to the memorial to AA Milne and his illustrator, EH Shepard. Here we came across two enthusiastic fans from Brazil with a collection of Winnie the Pooh toys. They took hundreds of photographs of the animals and each other, their excitement so infectious we joined in. “Winnie the Pooh is well known in Brazil,” they told us.

We found ‘Owl’s house’ high in the trees and collected sticks for the climax of our day, playing Poohsticks at the place it was invented! And, since you ask, I won!

As a child it was the library in the Staffordshire village of Rudyard that fed my passion for reading. Growing up there I knew that Mr and Mrs Kipling named their son after the village where they met and courted and visiting Rudyard Kipling’s home, Bateman’s, was on my list.

My partner, Anthony, had a less cultured upbringing and was expecting a baking demonstration and exceedingly good cakes!

Kipling was already famous when he found this Jacobean house down a “rabbit hole of a lane”, choosing it for its seclusion from pestering fans. Today, the wood-panelled rooms retain the family’s furniture and personal photographs.

Our guides painted a sympathetic picture of a hard-working man who liked children and would visit the local school to read stories aloud. Despite seeking seclusion for his writing, the family was sociable and the guest book is packed with illustrious names, many with the letters FIP next to them. This, we learnt, means ‘Fell In Pond’!

Back at the coast we strolled along Bexhill-on-Sea’s tidy promenade. Bexhill is believed to be the Walmington-on-Sea of Dad’s Army fame and, as we walked, we tried to remember the characters and their catchphrases in this much-loved sitcom.

The pride of Bexhill is the De La Warr Pavilion, a somewhat faded – but still striking – 1930s modernist building. It was a perfect place to shelter from the breeze and enjoy coffee and cake with a sea view.

While Bexhill feels sedate and reserved, its neighbour, Hastings, is remodelling itself as creative and even trendy. In the early 20th century, Robert Tressell colourfully renamed Hastings ‘Mugsborough’ in his witty and intellectual novel The Ragged Trousered Philanthropists.

Tressell wrote about poverty among men in the building trade and Owen, a journeyman, with a vision of a just society, who talked passionately about capitalist greed and dishonesty. A single parent who experienced hardship first-hand, Tressell worked in Hastings as a signwriter and painter.

I thought about this inspirational novel as we watched three fishermen painstakingly bringing a boat up the shingle beach by Hastings’ old town. Hastings has the UK’s largest beach-launched fishing fleet at The Stade, a Saxon name for a landing place.

The progress of the fishing boat being pulled up the shelving shingle was slow, sometimes the movement was almost imperceptible. The guys worked tirelessly, moving runners under side skids and the keel while cable took the strain.

We explored the tall wooden net sheds crowded around The Stade, built to store fishing gear. Stalls were selling fish as fresh as it gets and the miniature railway tooted cheerfully. We climbed up to the castle for the view over the colourful houses of the old town, the wooden weatherboard mirroring the construction of the old boats.

Serendipitously, Hastings had arranged a festival for our visit. The Hastings Fat Tuesday (Mardi Gras) music festival lasts for five days. On the Saturday 40 bands across a myriad of genres play 15-minute sets in 20 different venues across the town.We visited a few venues among the winding narrow streets of Hastings’ old town that have a vintage vibe. Over a glass of local ale we heard Irish fiddle music, acapella and excellent cover bands. It is impossible not to love a place that has music in its soul.

It was writers who had brought me to Sussex, but I certainly left this captivating county with a song in my heart and rhythm in my toes.

Where to stay in Sussex

Camping advice: How to pick the perfect campsite

Follow our advice to find exactly the right campsite for your needs ... 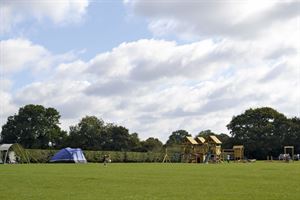 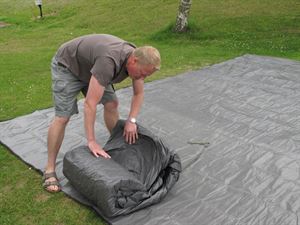 Keep the groundsheet of your tent in good condition with these quick tips ... 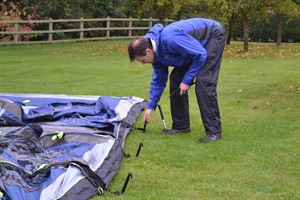 Camping skills: how to pitch and pack an inflatable tent

Ever wondered how to put an inflatable tent up? Help is at hand – just follow our easy guide to pitching and ... 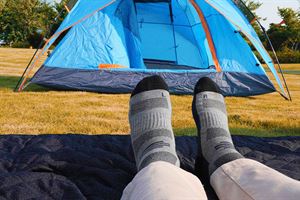 With travel plans still on hold, the team at MMM, Campervan, Caravan and Camping reveal the top campsites they are looking forward to visiting ... 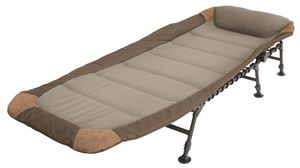 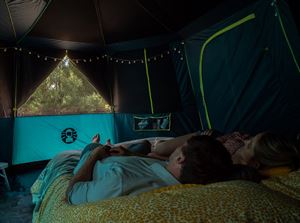 Thousands of you have been camping out safely at home during lockdown. Have a look at our selection of ... 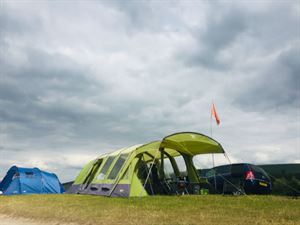 Take a tour of this fabulous Vango set-up and get inspiration for your own tent ... 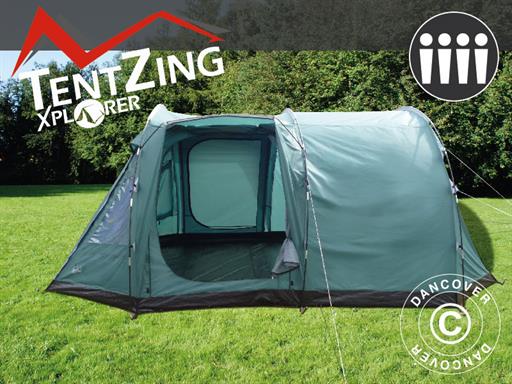 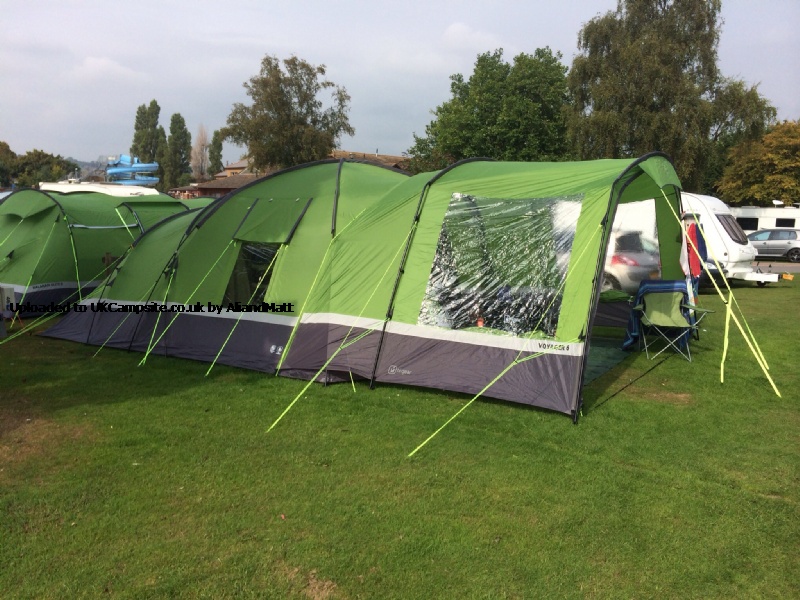