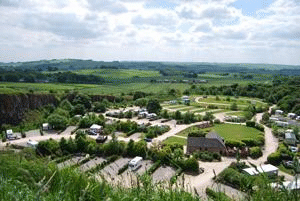 PACKING ‘em in around the Peak District? You bet. This is one of England’s most popular areas for camping, although luckily there are plenty of sites within this National Park to cater for most needs.

Like many sites, Rivendale in England’s Peak District has discovered yurts and pods, and the benefit they bring in extending the tent camping season.

Rivendale’s Greg Potter says: “We think that the fondness for yurts and pods will continue amongst families, particularly the wooden structures which are warm, do not leak or blow down and do not require wrestling to the ground, loading wet and muddy into the family car and hanging up in the garage to dry.”

He also reckons: “Backpackers who came early and late season (in 2010) and enjoyed pretty good weather in the Peak District in relative solitude will also be using the yurts and pods early season for warmth, reverting to their tents in May with the expectation that the weather patterns for the last three years continue.”

If you want any further evidence that a pod might be a cosy out of season alternative consider this: “Last year on the 29 January campers were clearing 2ft 6in of snow from the deck of the pod in 13 degrees of frost – but were still kept snug by its high levels of insulation and built-in heater.”

Greg Potter says: “Our prediction for next summer high season is that the economic squeeze and weather issues will lead people to put off booking as late as possible. But they will book and this will lead to disappointed clients unable to find space during the school holidays – especially when local events are on.”


This review was published in the February 2011 issue of Camping magazine. Order our latest issue.